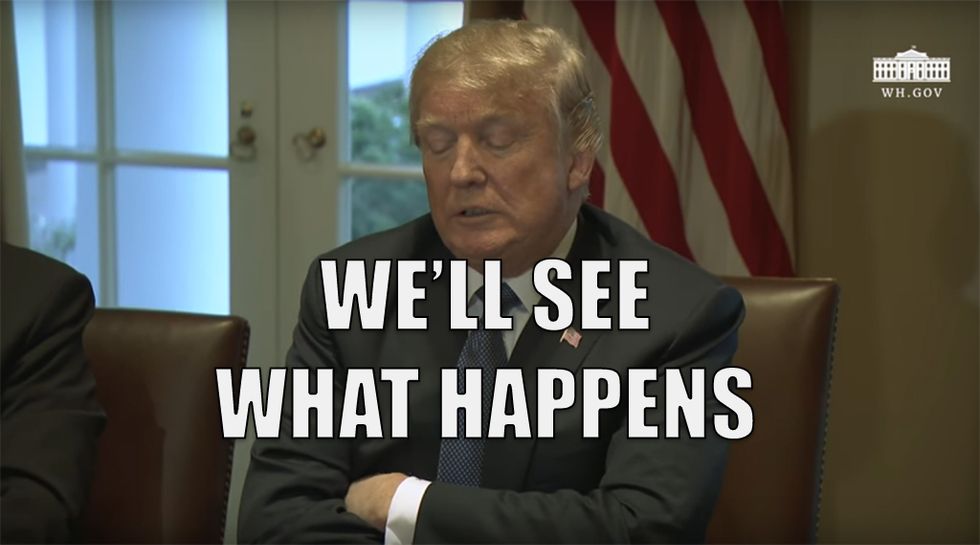 This brilliant idea is based on another rule that the Trump administration already passed last year -- the reinstatement of the Mexico City Policy, aka the global gag rule on abortion. This law prevents any health clinics that the United States provides funding to across the world from providing abortion or referring patients to abortion providers. This cut an estimated $8.8 billion from health funding in poverty stricken countries. The policy was first put in place by Reagan, rescinded by Clinton, put back by Bush, rescinded by Obama, and then reinstated by Trump.

Trump's policy is, actually, far harsher than the one implemented by Dubya, which only cut $600 million from these organizations. The Bush policy only applied to organizations providing family planning services, but the Trump policy applies to any health organization at all -- including those that provide treatment for malaria, tuberculosis, infectious diseases and, of course, HIV/AIDs.

If you're wondering how that's been working out -- well, there are fetuses on the street now in Kenya, if that gives you any idea.

Health worker Elizabeth Wanjiru was walking through the narrow streets of Kenya's largest slum earlier this year when she came across two schoolboys pointing at something in a muddy ditch. As she drew closer she saw it was the remains of an aborted fetus.

Dumped elsewhere in Kibera, the fetus had washed up in a narrow alleyway after a night of rainfall. It's something Wanjiru hasn't seen for years.

Abortion is already illegal in Kenya, but Family Health Options Kenya (FHOK), the organization that had previously been providing low-cost contraception to these women, is supported by the International Planned Parenthood Federation, which has refused to comply with Trump's demands and stands to lose $100 million in funding as a result. Shockingly, no anti-choice organizations have stepped up to help provide that funding or those services.

Long story short, because these women are now unable to access contraception, they are getting pregnant with babies they cannot afford to have and are turning to illegal and dangerous abortion methods instead.

Without access to contraception, Dija became pregnant with her third child last October. She went to a backstreet clinic in Kibera and got abortion pills illegally. To pay for the pills, which cost about $10, Dija had to dip into precious savings she had made from her work at a women's group in the slum.

"I couldn't give birth because my husband is not supporting or helping me, so I decided to terminate the pregnancy. I thought that was the best option," she said. When CNN interviewed Dija in her home, she said it had been a month since taking the abortion pills, and she was still bleeding.

The practitioner, who told CNN that she was a trained midwife, said she sees mostly young schoolgirls and unmarried women. She carries out the abortions in her small home. On a twin bed covered by a thin clear plastic sheet, sat a bag with surgical gloves, a jar of petroleum jelly, cotton wool, some pain killers and the needle, attached to a long, thin tube, which is used to drain the fluid into a bucket on the floor.

Botched abortions are already extremely common in Kenya, due to abortion being illegal there.

A 2016 report from Kenya's own Ministry of Health explained:

Despite improvements in several key health indicators over the past decades, maternal mortality and morbidity have remained high in Kenya. A significant proportion of these deaths and morbidities is driven by complications of unsafe abortion.

A nationwide study on the incidence of abortion in Kenya conducted by the African Population and Health Research Center (APHRC), in collaboration with the Ministry of Health (MoH) and other partners, revealed that about half a million induced abortions occurred in the country in 2012. Most of these abortions were unsafe and resulted in various complications. The study also revealed that most women with complications from unsafe abortion are treated in public health facilities, exerting pressure on scarce health system resources.

And the Center for Reproductive Rights reports:

CRR investigators found that a staggering 35% of all maternal deaths in Kenya are due to unsafe abortions. At least 2,600 women die from complications of unsafe abortions every year and another 21,000 are hospitalized at great cost to Kenya's cash-strapped health system.

In America, in 2012, there were 699,202 abortions. Only 200,000 more. Gee! It's almost as if having widely available subsidized contraception and birth control and safe, legal abortions saves lives!

The most disturbing thing here is that our government already knew this was going to happen, and didn't care because the idea of the policy warmed the hearts of assholes who can't see beyond how awesome it would be to get to see millions of poverty-stricken women across the world forced to give birth to children they cannot care for. The reason they knew is because this exact same thing happened when Bush reinstated the policy. Abortions -- illegal, unsafe abortions -- skyrocketed.

It's heartbreaking that this is happening in Kenya, and terrifying to think of what would happen here if we end up with the same policy.