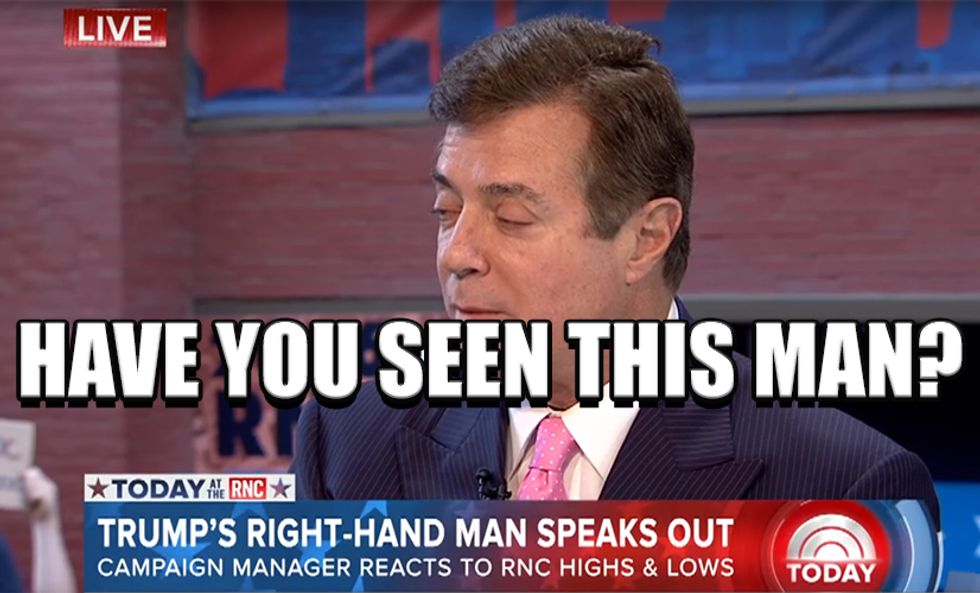 Morning Wonketariat! San Diego, it's your night to shine! Visit with Wonkette at Chicano (pot luck!) at Chicano Park, 5 to 8 p.m.! In the meantime, here's some of the things we may be talking about today.

Paul Manafort and his minion, Rick Gates, have been asked to surrender themselves to Robert Mueller and his league of extraordinary investigators.

What will Robert Mueller put in our trick or treat baskets? Will it be an indictment for Paul Manafort? (Yes, we already told you that.) But is there more? How about Carter Page? Mike Flynn? Jared Kushner? LOCK THEM UP!

This weekend, as you were putting the finishing touches on your sexy Walter Cronkite costume, Dana Boente was "You're Fired."

Trump and Republicans have set their deflector shields to maximum as they continue to dodge Trump-Russia questions with their new Benghazi uranium-flavored pizza scandal.

Trey Gowdy is full of butthurt (again) that someone in the Trump-Russia investigation LEAKED that Mueller was about to start collecting scalps.

The ACA open enrollment period begins on Wednesday, but don't expect to see much effort from the administration to keep people from dying from illness and injury.

Republicans are expected to unveil the Trump tax cuts (for the super rich) later this week, as well as a number of other quieter poor-fucking measures, like killing the IPAB, and steamrolling judges, but Robert Mueller may have just ruined EVERYTHING.

The dirty details of the Trump tax cuts (for the super rich) are falling on Paul Ryan and Kevin Brady, two Morans who will try to convince people that they're not actually about to completely fuck up the housing market (again), screw the poors (again), and dump oodles of Ameros on Wall Street (again).

The National Association of Homebuilders has bailed on Paul Ryan and the Trump tax cuts (for the super rich), and now Republicans are quietly throwing up their hands in frustration.

Meanwhile, Marco Rubio has whipped out his retractable pocket-spine once again to defend the child tax credit.

REXXON and Jim Mattis are talking about the post-9/11 Authorization for Use of Military Force (AUMF) as people are talking about limiting Trump's war powers, but there's some on the Hill worried that a new AUMF might make our never ending wars worse.

How many crooked industry swamp monsters have now been given the greenlight to rape and pillage the federal government? All of them, Katie.

Protections for government whistleblowers at the VA have gotten a hell of a lot worse, with some workers literally shoved into old storerooms.

In a remarkable PR push, ICE started tweeting out some lies after people were pissed ICE agents arrested a 10-year-old girl with cerebral palsy after emergency surgery, or this story about a Detroit area man arrested after testifying as a witness in a criminal trial.

It's not that the new SEC chair is a lazy SOB, he just wants to hold individuals accountable for shady corporate fuck-ups. Why punish the poor, innocent corporation for the actions of one, coked-out suit who can't afford his champagne kisses and caviar dreams?

Then again, super rich politicos, talking heads and shadowy donors are dodging their debts to Uncle Sam and hoping he'll never come to collect. This is literally another reason to hate Joe Scarborough and Jill Stein.

Things are so bad in Puerto Rico that we may never know just how many people died as crematoriums are burning bodies to save time and space, making the death toll inaccurate and families ineligible for FEMA money.

Puerto Rico's electric company "You're Fired" Whitefish Energy after its governor called the entire contract a sloppy pile of shit upon speaking with fellow governors and actual experts without ties to grifty bastard Ryan Zinke.

Texas Republican Rep. Pete Sessions is telling the National Republican Congressional Committee to "keep the hell away from Dallas," even though the bloodthirsty Democrats have set their sights on his seat for 2018.

That Tennessee neo-Nazi rally we told you about on Saturday was relatively peaceful, but there was a nasty fight outside of a bar after some Nazis ALLEGEDLY tried to "pick a fight with" (per the Washington Post) or "punch in the face" (per witnesses) a biracial couple. Fucking Nazis. [Video]

Nixonian spawn and rat fuck Roger Stone has been suspended from Twitter for being a potty mouth. HAHAHAHatechet Man!

After being "You're Fired" by Tea Party crazies, former Speaker John Boehner is spending his twilight years chain smoking and shit talking in between uncontrollable sobs of patriotism.

Because he's an actual American, former President Obama will head to Chicago for jury duty.

And here's your late night wrap-up! Stephen Colbert is clenching his grapefruit while he checked out the $15 Goop magazine; James Corden isn't sure why Trump brags about fake news; Chelsea Handler went on a field trip to learn about the Statue of Liberty; John Oliver 'splainered how fucked the federal financing for flood recovery has become; and Bill Maher is sick of ol' Weepy and fetish patriotism.

And here's your morning Nice Time! Baby goats and kitties!