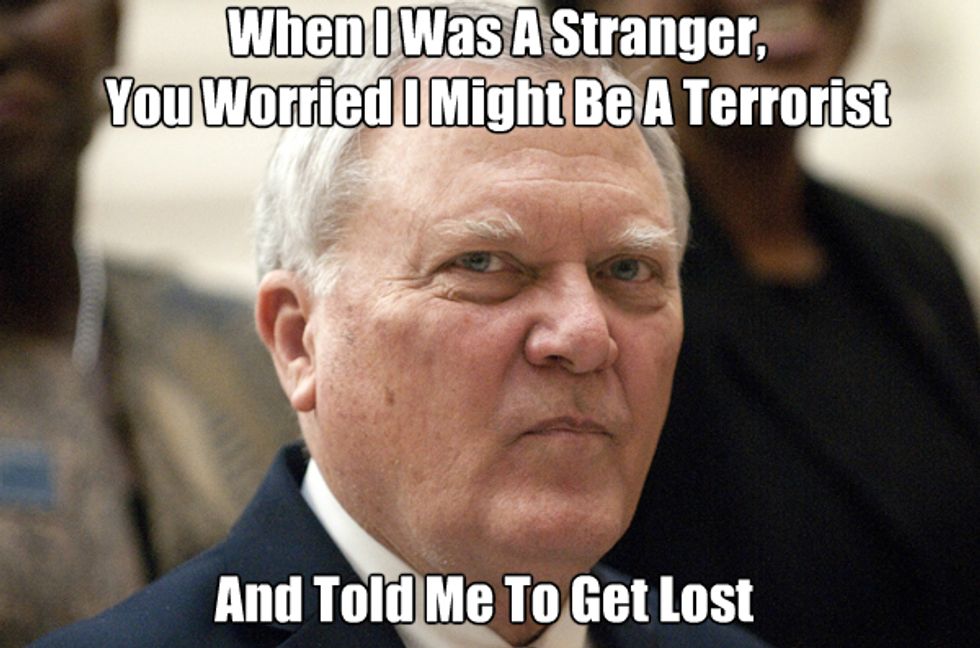 Georgia Gov. Nathan Deal is a Christian. He loves the Bible so much, he made sure cabins in state campgrounds were equipped with copies of the Good Book. But he's apparently pretty easygoing about actually following some of Christ's advice, especially the things about treating strangers as you would your neighbor and other hippie ideas. That's why Deal was among the 27 governors who announced after the Paris terrorist attacks that Syrian refugees were not welcome in Georgia. Had Jesus wanted us to take in strangers from foreign lands, surely He would have mentioned it.

[contextly_sidebar id="QC2lbgxXtJOKcO2bIDBgpFJY8scnzWNr"]Now, even though governors actually don't have the power to bar refugees, Deal is in a fine snit over a Syrian refugee family that was placed in the Atlanta area earlier this month. He's made it clear that the state's Department of Human Services must not approve the family's application for Food Stamps, Medicaid, or any other public assistance, even though that may violate federal law.

The Department of Human Services sent a memo in November ordering employees not to process the applications of Syrian refugees after Gov. Nathan Deal (R) issued an executive order telling all state agencies to stop any involvement with the resettlement of refugees from Syria.

Deal wants to keep Georgia safe from a family of three potential terrorists (one of whom is a 4-year-old child) and an out-of-control administration that insists on acting as if the Constitution gives the federal government the power to control immigration. Which, yes, technically (and in all other ways) it does, but opposing Syrian refugees is very popular among voters, so shouldn't that count for something?

Deal is so sure that he's doing the right thing that he's willing to risk a lawsuit:

“We’re ready to defend it if we have to. I’d rather not spend taxpayer money defending something that can be avoided,” he said. “I just don’t know why the federal government wants to do this behind closed doors in total secrecy, and don’t even trust state leaders charged with the security of our states with basic knowledge.”

The feds have threatened to sue if Georgia doesn't reverse its policy, what with the whole thing where state governments are not allowed to discriminate on the basis of national origin when it comes to benefits, not even if they're really scared they'll somehow find a way to use their EBT cards to blow up a church full of Christian children. Gov. Deal's own attorney general, Sam Olens, sent him an email advising that the state's position "is not well supported in the law." Olens added that he hoped "every effort is made to resolve this matter without resort to litigation." And then maybe he updated his résumé.

As for the refugee family, they seem like a pretty rough crew. There's a daddy, Mohammad, who was a taxi driver in Syria, a mommy, Ebtesam, who saw her sister shot dead by a sniper while walking with her infant daughter, and a little boy, Hasan, wholikes cartoons. We're sure something in that profile is suspicious, even terrifying: after all, the San Bernardino shooters were parents, too!

The family is beginning to learn English and getting a crash course on getting by in America with the help of known refugee sympathizers World Relief Atlanta and the Johnson Ferry church, which the Atlanta Journal-Constitution says has "drawn a mixture of praise and criticism" for doing what a church is supposed to do: helping people in need.

Astonishingly, Mohammad and Ebtesam have actually been allowed to come into contact with ordinary Americans:

On Thursday morning, Jim and Jeanne Slaughenhoup, Johnson Ferry volunteers, showed Mohammad and Ebtesam how to count U.S. money and then they went on a shopping trip with them to a local grocery store. The Slaughenhoup couple cited how the Bible teaches people to care for the needy, including refugees.

“We love these people,” Jeanne Slaughenhoup said as she let Hasan watch a “Tom and Jerry” cartoon on her cell phone. “We have great compassion for them.

It's not clear whether the group gave any advance warning to the stores before they went shopping, if you can believe that! Given the current hysteria over Scary Muslims, we won't be terribly surprised to learn that the Slaughenhoups have been forced to go into hiding. Especially given the very suspicious gratitude shown by the former taxi driver, Mohammad:

Sitting in his family’s apartment furnished by the church, Mohammad said he was grateful for the Johnson Ferry volunteers’ help.

“They stand next to us and have helped us unconditionally,” he said through an Arabic interpreter. “We are so happy and proud.”

Mohammad said his family's history was extensively screened before coming to America, and doubted that a terrorist would bother going through that long process, since resettlement agencies and the U.S. government "are very smart and they could recognize if someone has bad intentions." You can tell he's a foreigner since he thinks the U.S. Government is smart; no doubt he dreams of the day when Hasan's children can gripe about ineffective bureaucrats who won't protect his family from whoever we're terrified of in another generation. Both parents also condemned the Paris terrorists as "criminals," which is exactly what you'd expect them to say, now isn't it?

For his part, Governor Deal is appropriately freaked out over the whole sordid affair. Children watching cartoons? Muslims going shopping without an armed security detail? Shocking:

“We have taken every effort we can at the state level to try to make sure they do not pose a danger to the citizens of our state,” the Republican governor told reporters Wednesday. “When you have a majority of the American public having grave concerns about a specific group of refugees, the federal government owes it to the people of the country and the people of Georgia to give us more assurances than they have given us to this point.”

[contextly_sidebar id="ofvc5nXOQqLqPA5Q3mHCLVGGbQCXMYi2"]Denying a refugee family food and medical benefits is certainly an excellent way of keeping Georgia safe. We bet ISIS will really get the message. Maybe Gov. Deal could drop by Plains some Sunday to see if Jimmy Carter could teach him a thing or two about Christianity.