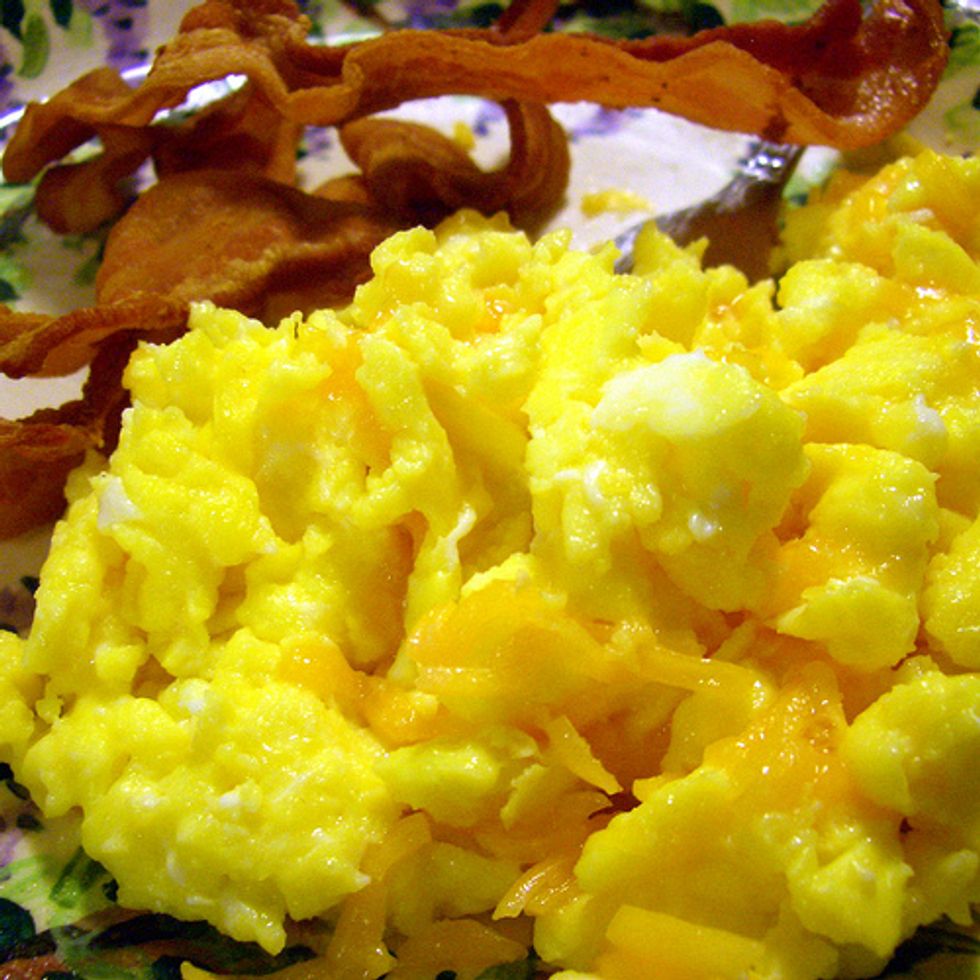 ViaWikimedia CommonsWelcome back to Off The Menu, where we bring you the best and strangest food stories from my email inbox. This week, we’ve got more stories of restaurant employees whose crap was just in no way together. As always, these are real emails from real readers.

This is the second-to-last Off The Menu to appear on Wonkette. Starting Monday, May 2, Off The Menu will be appearing in its new home at Thrillist. If you'd like to keep up with everyone who saves bread and is allergic to crunchy, that'll be where you'll find it.

I live in a small northern Arizona town where the ethnic diversity is broken down into either White or Latino, who mutually loathe and ignore each other. In my town, black people are regarded mythologically: you hear about them, everyone has a friend who says they've seen one, yet no one has actually encountered any.

One afternoon, I was finishing my shift at a popular local diner, where I unfortunately spent several years working during grad school, when I found my manager standing with one of the bus boys in the kitchen (already an odd sight, because these two absolutely hated one another), both staring agape into the dining room, because we’d had a black family come in.

I take their orders and go to put in the tickets when my manager snatches the ticket out of my hand and reads it. She then states with child-like wonder, “eggs … they eat eggs ...” and our bus boy next to her simply whispers, “eggs ...”

Till the day I quit, the bus boy and manager would occasionally look at each other and just say the word “eggs” with total awe.

My sister decided to become a vegetarian at age five, after learning where the meat we ate came from. My parents were happy to accommodate and things were generally fine whenever we were at home. Traveling was another story, though, and we did a fair amount of it. I assume things are better now (this was 10-15 years ago), but these trips were usually pretty difficult on my sister, as inquiries about vegetarian options were often met with a blank look, and she was often reduced to eating plain pasta or a salad without the chicken and a side of fries multiple nights in a row.

The worst (or best) experience we ever had, though, was at a Tim Horton's in Newfoundland, where we must have stopped just entering or exiting the province. My at-the-time ten-year-old sister ordered the vegetable soup, at which point my father interjected to ask whether the soup was made with vegetable stock or chicken/beef stock. The cashier responded that it was beef stock, at which point my father indicated that my sister couldn't eat it, as she was a vegetarian. The very friendly cashier took about three beats to think before responding, "Well, I don't think it has a lot of meat in it?"

I was meeting a friend on her lunch hour from her store clerk job in a local mall, so the food court was the obvious option. I arrived early so I could find out what she wanted and get all our food arranged, so that when she got free we didn't have to spend part of the lunch waiting in line.

So I wait in line for whatever we were eating (I’ve since forgotten). When I got to the point of ordering drinks, I asked for my drink (a large diet soda) and her large water. I specifically said I knew that it wouldn't be free and I'd be happy to pay for it.

He arrived with the food, a large soda and a tiny paper cup of water. I repeated that I wanted a large water and that I'd pay the full price of a soda for it. He said, "I'm sorry, but water only comes in one size." I told him, "No, water comes in whatever size cup you put it in. I'll pay full price for a soda." He repeated "I'm sorry, water only comes in one size." The manager came up and asked if there was a problem. The kid, now nearly in tears, said "He wants a large glass of water." The manager turned to me, obviously to explain the water policy, when I said, again, "I've already offered to pay full price for it."

When the manager turned back to the kid and explained that all he had to do was ring up their reduced price for a cup with ice and put water in it, the kid wailed, "But he didn't ask for a cup of ice. He wanted a cup of water. Water only comes in one size!"

My wife and I sit down in an 'Authentic Mexican Restaurant' located in downtown LA, and we both order ceviche. The waitress comes back with two bowls of the oddest looking ceviche we have ever seen, but oh well, we dig in.

Not only is it odd-looking, but it's the spiciest we've ever had it! The waitress comes by to check on us, we both remark on the odd, fiery ceviche. She goes in the back, and out comes the waitress and the manager, who apologizes for the waitress, who just started there and didn't know what ceviche was, so she served us two bowls of jalapeno salsa.

We all had a good laugh, no harm done, tipped her and left, our lips burning like fire.

My husband and I were living in a city that was in a major growth period with lots of money coming in, and new restaurants and bars were opening all the time. We decided to try a new bar that had opened -- a very flashy place with a minimal all-white interior, clearly going for a more urban, sleek vibe than the other bars on the street. We got our menus and quickly ordered (we selected drinks that were on the menu, I want to emphasize): a gin and tonic for me, and a martini for my husband.

The way-too-cool bartender made no expression but nodded and went off to get our drinks. A minute later, he set them down for us. Mine was pretty straightforward. Gin, tonic, lime, highball glass. My husband, however, had a lowball glass filled with clear liquor, garnished with a lime -- and a salt rim. We both exchanged looks -- did he hear margarita? But then why was the liquor so colorless? And he slowly took a sip.

He practically spat it out. “What is this?” he asked the bartender almost as a reflex (he’s the kind of overly polite person who will usually eat the wrong meal rather than correct waitstaff).

“A martini,” the bartender said, looking very unimpressed with our clearly unsophisticated palates.

The bartender rolled his eyes and reached under the bar to pull out the bottle of Martini & Rossi Dry Vermouth. He set it on the bar and pointed to the back, to a drink recipe which to be fair, did suggest simply pouring vermouth in a glass with a lime wedge. The salt rim, I guess, had been his signature touch.

My husband and I were expecting our first child and his employer unexpectedly transferred him from our hometown of Nashville to Oklahoma City to finish a project there. I was seven months pregnant and we were being moved 12 hours away. Yes, the employer was an ass but my husband couldn't quit, not with a baby on the way. I could have stayed behind but we wanted to be together during this time.

Now we had driven behind the moving company moving our things and they went ahead while we stopped to eat at the only thing we could find that was open that wasn't fast food or a Waffle House, a Fazoli's [Editor’s Note: BREADSTIX BREADSTIX BREADSTIX] somewhere inside Oklahoma. I was tired and sad and hungry so I ordered the first thing that I saw on the menu, some spaghetti with a side salad. The nice young man (I mean YOUNG, he looked like he was 12) rang it up and I asked for the salad dressing on the side (because F's tended to fricking drown those salads to hide the less than fresh nature of them).

The young boy blinked owlishly at me. "On the side?"

"Yes." I didn't understand what the deal was but I think I was too tired to argue or catch on to his confusion.

"Ohhhh kaaay." And he shook his head but clearly either pitying me or mortally afraid of me (or my condition) he smiled and said it would be right out.

Now I worked in the food industry (if you call Pizza Hut 'food') during college, so I'm pretty laid back when it comes to this stuff. We've all been there.

We wait for our food and it comes out - the sweet child who took our order brought it out to our table. He very happily places my spaghetti in front of me, followed by my salad.

Which is drowned in dressing on ONE SIDE OF THE SALAD. Like one half of the salad was just utterly covered from top to bottom with the stuff that you couldn't see any green. I was so stunned I could do nothing but gape at him and his earnest face, so eager to please the crazed pregnant woman.

My husband, who is tired and cranky himself, sputters out, "Are you KIDDING me?"

And the poor kid looks at me in horror and asks, "Is it on the wrong side?"

I burst into laughter until tears streamed down my face. I ate every bit of that salad.