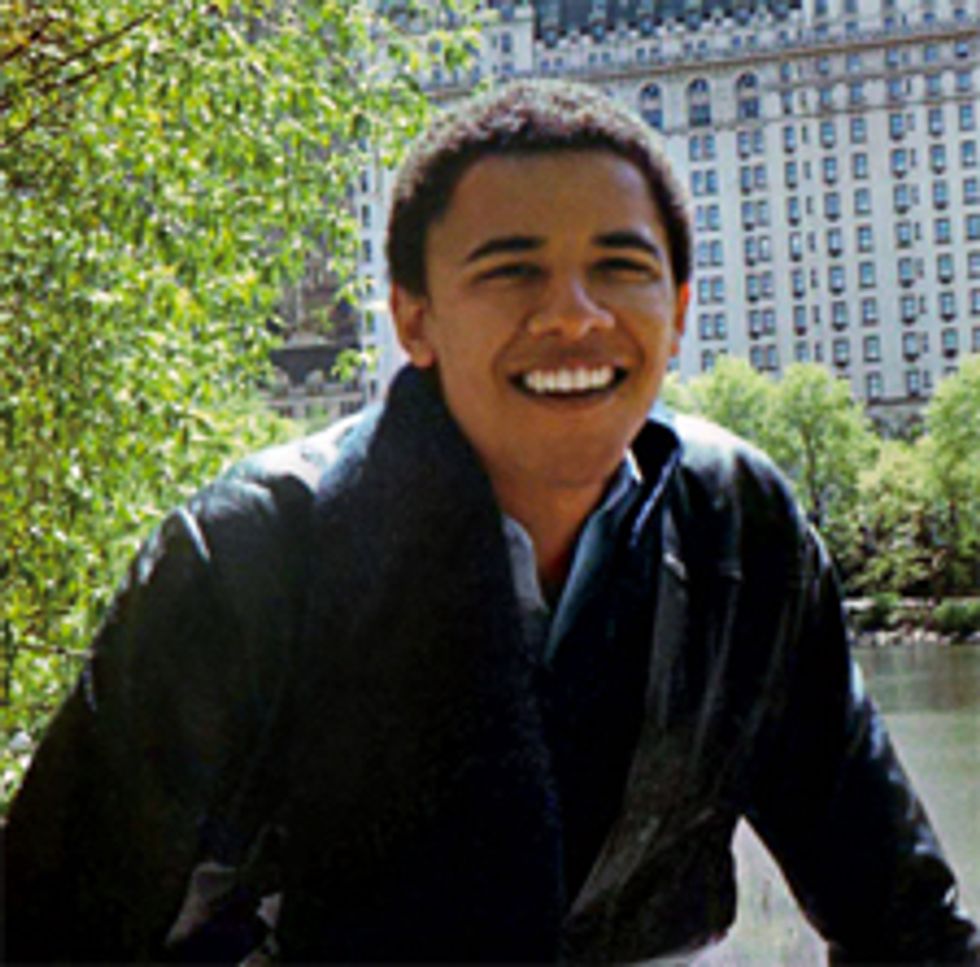 Vanity Fair is out with the megahot megastory of the day: Barack Obama had girlfriends when he was a young man in New York City. Figures. And writer David Maraniss even contacted some of these ladies and got them to hand over the ol' love letters and journals. (This was in the Ancient Times, before people showed their love by clicking buttons on computers.) It's predictable Obama musings -- wah wah I am conflicted between different things wah wah, and also I know a lot about poets and stuff, wah.

Obama spent a summer shackin' up with this one gal, Alex McNear, "a young woman from Occidental who had enchanted Obama when she was co-editing the literary magazine Feast." Oh God. "Alex was interested in postmodern literary criticism, and her arguments brimmed with the deconstructionist ideas of Jacques Derrida, the French philosopher. In one letter she told Obama that she was writing a paper in her modern-poetry class at Occidental about T. S. Eliot’s 'The Waste Land.'" Oh God. And what did you think about "The Waste Land," Obama? "I haven't read 'The Waste Land' for a year," he starts. He is so Columbia, yikes:

I haven’t read “The Waste Land” for a year, and I never did bother to check all the footnotes. But I will hazard these statements—Eliot contains the same ecstatic vision which runs from Münzer to Yeats. However, he retains a grounding in the social reality/order of his time. Facing what he perceives as a choice between ecstatic chaos and lifeless mechanistic order, he accedes to maintaining a separation of asexual purity and brutal sexual reality. And he wears a stoical face before this. Read his essay on Tradition and the Individual Talent, as well as Four Quartets, when he’s less concerned with depicting moribund Europe, to catch a sense of what I speak. Remember how I said there’s a certain kind of conservatism which I respect more than bourgeois liberalism—Eliot is of this type. Of course, the dichotomy he maintains is reactionary, but it’s due to a deep fatalism, not ignorance. (Counter him with Yeats or Pound, who, arising from the same milieu, opted to support Hitler and Mussolini.) And this fatalism is born out of the relation between fertility and death, which I touched on in my last letter—life feeds on itself. A fatalism I share with the western tradition at times. You seem surprised at Eliot’s irreconcilable ambivalence; don’t you share this ambivalence yourself, Alex?

That's got to be the quintessential Obama pick-up line: "Don't you share this ambivalence yourself?" Ranks right up there with, "Don't you see this as a social construct?" or "UHHHHHH look," at least.