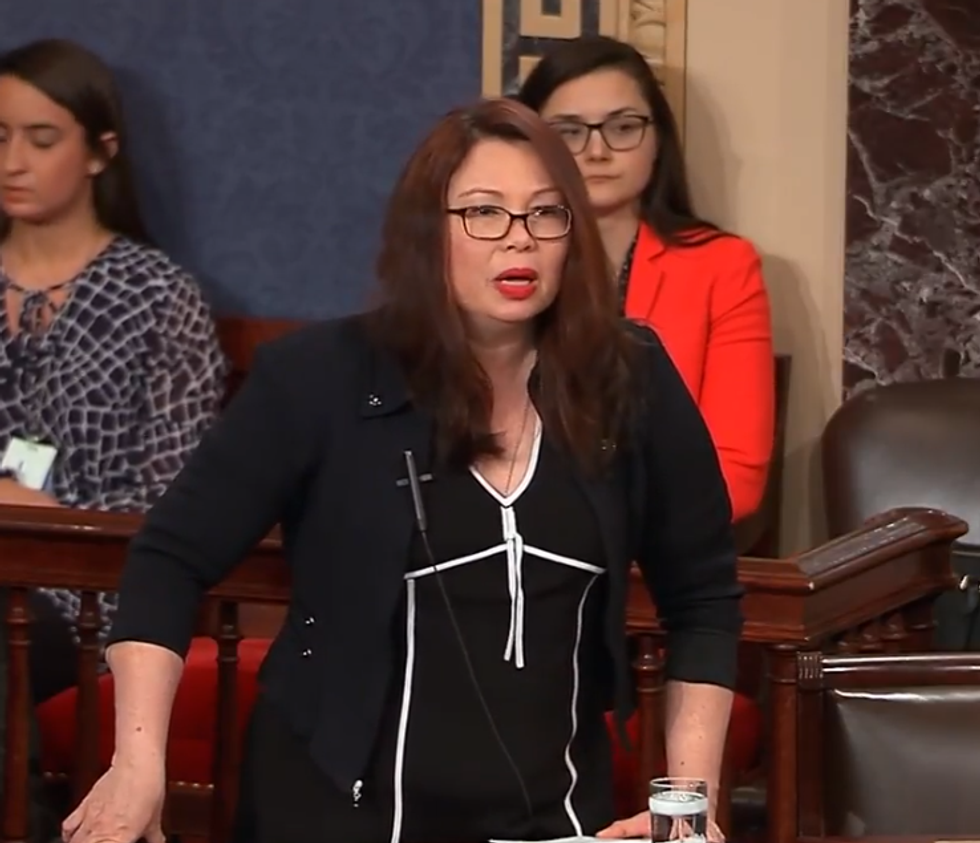 No there is not a deal yet to reopen the government, but there's a vote at high noon, Eastern Time, at which point the Senate will either get the job done, or it won't. Mitch McConnell and Chuck Schumer have been holding quiet, secretive meetings, and a group of 20 or 25 moderate-type senators has been having a slumber party in Maine Senator Susan Collins's office. So maybe they will figure it out! No matter what, Donald Trump, the untamed, inexperienced child president, will continue being absolutely no help, and in fact will make it worse, because he is an incompetent asshole, and he will continue doing whatever President Stephen Miller, the littlest wannabe dictator, orders him to do.

Meanwhile, Vice President Pence used American troops as props while he complained about mean Democrats withholding their pay, and House Republicans are going on TV to cry about military funding, which is RICH, considering how Senator Claire McCaskill introduced a bill to keep military pay going, the way Congress did during the last shutdown, and McConnell grunted, "I object!" Meanwhile, Senator Tammy Duckworth, an actual veteran who LOST HER LEGS FIGHTING ONE OF AMERICA'S WARS, has been fighting for the same.

Speaking of Duckworth, we would like to report a murder, because holy crap look at this video of her on the Senate floor this weekend:

Mr. President, this morning, Donald Trump tweeted that, and I quote, "Democrats are holding our military hostage in this shutdown." Just the latest in a string of recent comments were he accuses Democrats like me of not caring about our military. And it's the latest example of him failing to show leadership to take responsibility for leading this nation.

Does he even know that there are service members who are in harm's way right now watching him, looking for their commander-in-chief to show leadership, rather than to try to deflect blame? Or that his own Pentagon says ... that the short term funding plans that he seems intent on pushing, is actually harmful to not just the military, but our national security?

I spent my entire adult life looking out for the well-being, the training, the equipping of the troops for whom I was responsible. Sadly, this is something the current occupant of the Oval Office does not seem to care to do.

And I will not be lectured about what our military needs by a five-deferment draft dodger. And I have a message for Cadet Bone Spurs. If you cared about our military, you'd stop baiting Kim Jong-un into a war that could put 85,000 American troops and millions of innocent civilians in danger. [...]

If the president truly cared about them, then he would stop hiding behind his Twitter account, stop blaming everyone else. And he can tell his party, a party that controls the House, the White House, and the Senate, to do their job. To govern. To stop allowing the most extreme wing of your party to prevent us from passing a long term funding solution that the military itself, your own leaders that you nominated and appointed, is asking for.

At the very least, you could ask your party to guarantee military pay and death benefits for our service members and their families, so that the troops downrange aren't putting their lives at risk overseas while also worrying about whether they're going to be able to feed their families, or if our government will take care of those families, if God forbid they must make that last measure of devotion for our nation.

And so on and so forth, OMG TAMMY DUCKWORTH, WE GET IT, YOU ARE NOW PRESIDENT.

In case anybody is confused over who is keeping our troops from getting paid, that veteran who LOST HER LEGS IN WAR just 'splained it.

So that is what is going on in America right now. Cadet Bone Spurs is a piece of shit, the entire Republican party is full of shit, and Tammy Duckworth is the boss of you now.