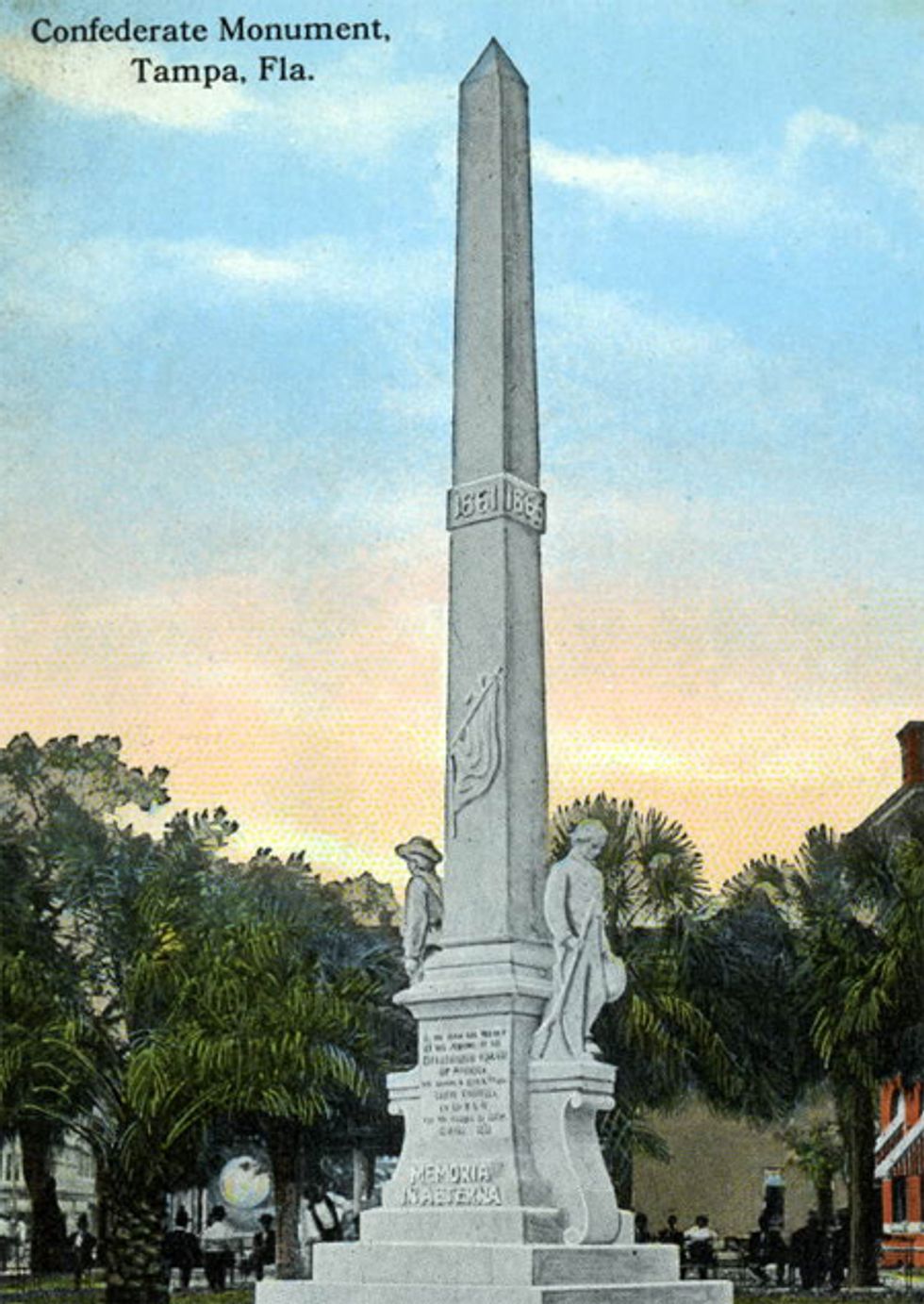 Not that they were trying to compensate for anything

The people of Tampa, Florida, know what to do when local politicians aren't willing to step up and do the right thing. The Hillsborough County Commission wasn't quite ready to remove a tacky Confederate memorial in front of the old county courthouse, erected in 1911. So the commissioners wimped out by saying, in effect, if you people want it removed, you go and raise the money. If opponents of the statue couldn't put up half the cost of removing the statue, $140,000, in 30 days, the memorial would stay right where it was.

Please don't be too shocked to learn the fundraiser blew past the goal in one day. Bye, ugly Confederate obelisk! Bye!

They reached their goal so fast thanks to several Tampa sportsball teams, boosted by a social media push from the city's mayor, Bob Buckhorn, and former Buccaneers coach Tony Dungy:

And then everybody wanted in on taking the damned thing down, with big-dollar donations coming from business and sports people, and also donations of $5 to $500 from commoners, too.

As the effort snowballed, the Greater Tampa Chamber of Commerce announced a $70,000 donation from its members, which included contributions from the Tampa Bay Buccaneers, the Tampa Bay Rays and the Tampa Bay Lightning.

The sportsball teams issued a joint statement saying they wanted to tackle that monument, knock it out of the park, and do something appropriately metaphorical for whatever sport the Lightning plays. We guess they'd put it on ice:

The commissioners had previously agreed that if citizens came up with half the funds needed, the monument would be moved to a family cemetery in Brandon, Florida, but first they had to throw up that dumb fundraising roadblock. Tom Scarritt, the Tampa attorney who led the effort to raise the funds, said the people of Tampa

"fixed the problem because it didn't appear that the county could." Choked up, he added: "I couldn't be more proud of my fellow citizens."

The Chamber of Commerce also issued a statement calling out the commissioners for being cowards and deciding to "pass their responsibility to the business community."

"The monument and what it represents is inconsistent with what is best for our region," the statement said. "We look forward to working with our County Commissioners in the future to make more enlightened decisions."

Mayor Buckhorn piled on, calling the commission's decision to pass the buck to the Buccs "a blatant attempt to not do the morally correct thing" and a decision that would have hurt the city's image with employers and tourists. He also warned commissioners not to try to get in the way of removing the memorial:

"I would dare them," he said. "I think this community has said, 'Enough is enough. We're ready to turn this page.'"

Oh dear. Please don't dare the bastards to do something awful. You've seen how that works with certain political jerkwads.

Commissioner Victor Crist, who had the bright idea in the first place, declared victory for his fiscal smarts. The original plan was for the county to pay for the move, with some volunteer help, but when a GoFundMe campaign only raised $7,000, Crist decided to up the ante and introduce the measure requiring private donations to cover half the costs. The commission voted 4-2 to make opponents of the monument jump through that additional hoop. In a statement, Crist congratulated himself for winning so bigly:

"Now the liberals should be happy it's moving, the conservatives should be happy that the taxpayers are not paying for it, and the Confederate enthusiasts, while they will still be angry because it's moving, should at least be grateful that it's going to be moved safely and erected properly at a site where they could still go and enjoy it," Crist wrote.

The local head of the Sons of Confederate Veterans, David McCallister, was resigned to the results of the fundraiser, but managed some butthurt at the result, saying he was disappointed but not surprised, and was at least glad opponents of the monument met the minimum number of cliches:

The point is, the people who did want to remove the statue needed to have some skin in the game. They needed to put their money where their mouth is.

Thank goodness they ponied up, put their shoulders to the wheel, gave it the old college try, and won the day. Still, McCallister had one more bit of non sequitur wisdom. He just couldn't see the sense of sports teams contributing to taking down a Confederate stone dick, asking, "How many Antifa members buy tickets to football games?"

Now there's a man who understands why these things matter to people.

Yr Wonkette is supported by reader donations. Click that "Donate" linky, you readers, you!