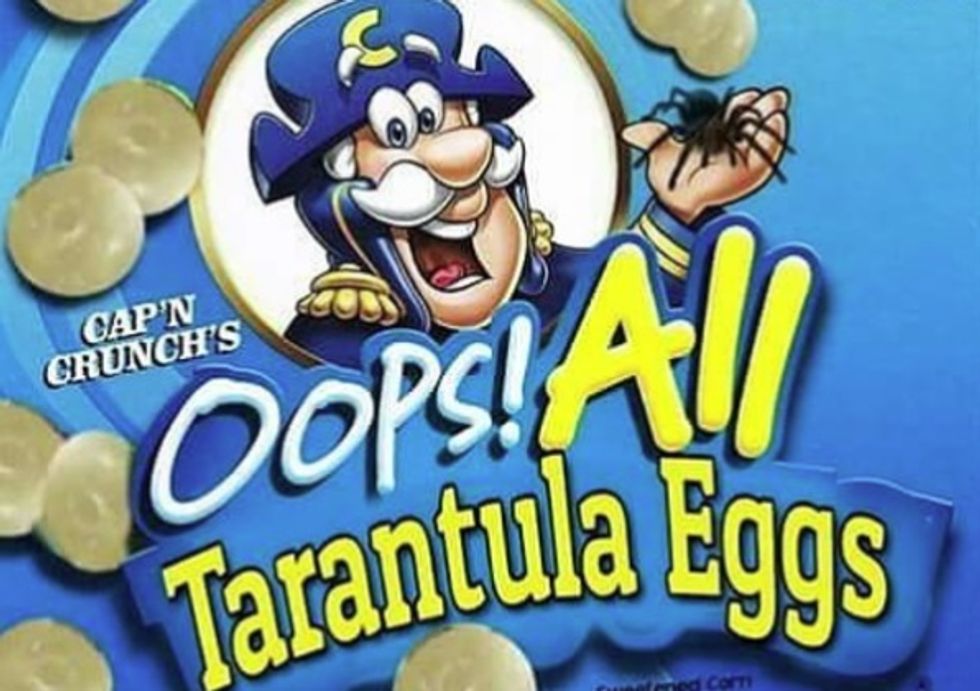 The Senate passed the Republicans' Big Fat Tax Cuts For Big Fat Rich Fuckwads Bill in the wee hours of Wednesday morning, and now the whole mess has to go back to the House to be passed all over again, because the version of the bill passed by the House yesterday contained a few items that turned out to violate the "Byrd Rule" for passing legislation through the reconciliation process. So the Senate had to remove those bits before it voted, fixing the House's mistake, and Donald Trump will just have to wait a few hours longer to sign a bill that takes your taxes and gives them to corporations and the already wealthy.

The bill passed the Senate with only Republican support, 51-48; John McCain missed the vote because he's in Arizona being treated for brain cancer. And Donald Trump is over the moon, and twote this semi-literate string of Randomly Capitalized Words:

Let's try killing a myth. Or at least explaining where it came from and giving it a swift kick in the pants.

But first, the House has to vote again on the thing, because, yes, it passed a major rewrite of the tax code without checking to see what was actually in it. Not a problem, of course -- Republicans won themselves permanent immunity for passing bills they haven't read in 2010, when the Affordable Care Act was passed through regular order but Republicans subsequently lied and lied about it.

Two prominent special favors to Republican constituencies had to get the axe after the Senate parliamentarian ruled they didn't qualify for passage with a simple majority. The first was part of Ted Cruz's precious, a provision extending eligibility for 529 college saving plans to parents of home schoolers.

We face a great precipice. And Paul Ryan is urging us forward.

Another item to get cut was a special favor for Mitch McConnell, which "would have protected Kentucky’s private Berea College from a proposed excise tax on university endowment earnings." So the overall anti-education tax stays in place, but the exemption for Mitch McConnell's favored school (and a few other private colleges) got scotched. Gosh, that's too bad. Paul Ryan must be very happy, though, since yesterday he complained the current tax code was "full of special carveouts and loopholes" -- right before voting for some more special carveouts and loopholes for the the well-connected.

One last item that had to go didn't actually confer any special benefits on anyone, but was an important part of the GOP's propaganda around the bill: The Senate had to kill off the bill's short name, "The Tax Cuts and Jobs Act," because the reconciliation rules really don't allow any provisions that don't have an impact on the budget. The name was challenged by the office of Sen. Bernie Sanders, and the ruling gave Republicans a great big sad because now the final bill that passes will have to go by its formal title, "An Act to provide for reconciliation pursuant to titles II and V of the concurrent resolution on the budget for fiscal year 2018."

Not surprisingly, McConnell spokesperson Don Stewart couldn't believe Democrats would be so petty as to challenge the supply-side fantasy name of the bill:

True enough -- all the name change does is make sure that at least one lie won't be enshrined in law. That, at least, seems worth doing, although the Rs will continue to call it the "Tax Cuts And Jerbs" bill anyway. Just for the sake of knowing, we'd sure like to see how the parliamentarian would have ruled on Donald Trump's preferred title for the legislation, the “Cut, Cut, Cut Act of 2017.” Although maybe he'd let that pass, since Ryan next will be able to cut Social Security, cut Medicare, and cut Granny's home heating. Cut cut cut? We meant win win win.