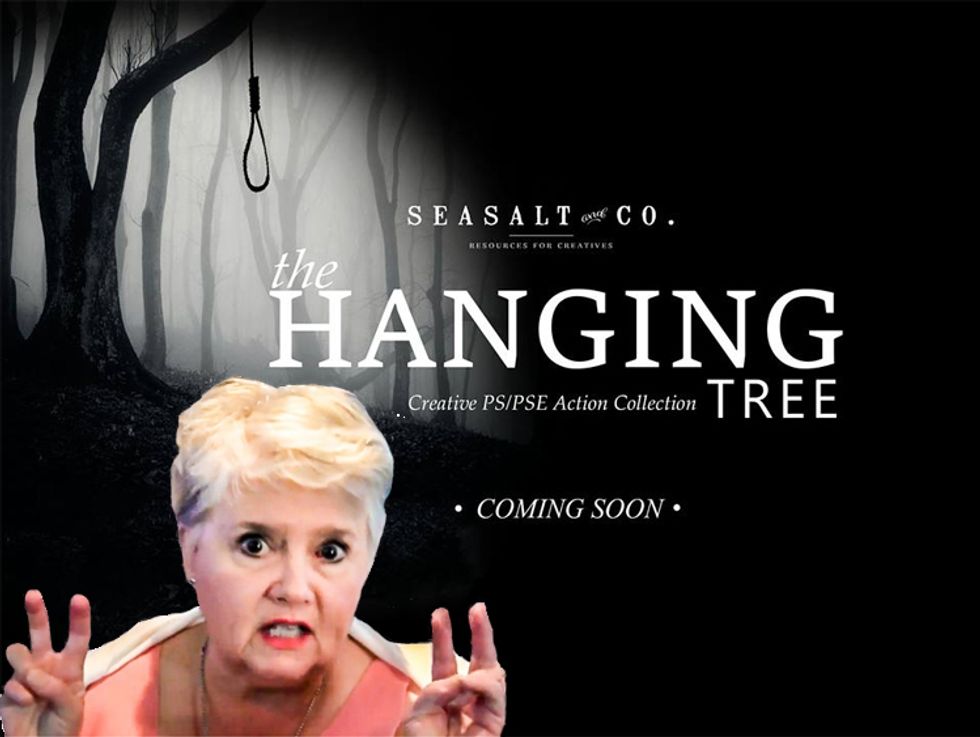 Is everybody amped for Bibi's Big Bloviation today? Tea Party "radio" host and WorldNetDaily contributor Andrea Shea King sure is. She happens to know exactly how important it is for all members of Congress to attend Netanyahu's speech, in fact: She's determined that anyone who doesn't attend is actually guilty of treason, and should be executed. We're not sure whether she thinks that would be treason to the United States or Israel, but it's definitely a hangin' offense, especially for members of the Congressional Black Caucus, because apparently they're the worst of the anti-Israel racists, what with looking like Obama and all.

On her January 24 dumb podcast/"radio show," King looked forward to Netanyahu's important speech, which she predicted would be "Churchillian," and such an important, historic moment that "people alive today, living to see what Netanyahu's going to say, I believe, are going to remember it for the rest of their lives. It is going to be one of those moments you never forget." We hear that he does this card trick thing that is just amazing, for starters.

Oh, but some people will be boycotting the speech. Those members of Congress are just plain not real Americans, King explained, because obviously they want Iran to have the bomb and to use it as soon as possible on Israel. Noting a pundit's prediction that skipping the speech could ultimately cost many of the these Democrats their jobs, King said that was simply not enough, because BECAUSE:

Listen, I would like to think that these guys could pay with their lives, hanging from a noose in front of the U.S. Capitol Building. Because what they are doing is they are putting their own interests above that of America. And to me, that is criminal. Criminal!

King didn't cite the precise U.S., Israeli, or Biblical law that mandates lynching people who boycott speeches by the Israeli prime minister, but as a Tea Partier, her commitment to the Constitution is beyond question. Probably treason -- those folks are awfully fond of finding instances of treason. Or maybe King just really liked the "Day of the Rope" chapter when she read The Turner Diaries, because she knows who really needs a good neck-stretchin' for this offense against America (and probably God Himself):

And guess what? Most of those members who are opting out of attending the speech are members of the Congressional Black Caucus. And their districts are all dumb clucks. Because the dumb clucks wouldn't be electing these people if they knew better.

How do people like this get elected to represent us in Congress? Because there are stupid people out there in those congressional districts who are so ignorant that it’s dangerous. Because these people that they elect into Congress vote, and when they vote, their vote affects us! I don't know who I'm angrier with ... these heinous people who occupy the halls of Congress or the dumb clucks that put them there.

Stupid, stupid people! Our lives are on the line and all they can think of is skin color! You know, all of us are going to turn black if we end up in a cage on fire! Stupid people!

We're not quite sure how King got from her opposition to a nuclear deal with Iran -- which is the point of Netanyahu's speech -- to deciding that boycotting the speech would support ISIS, who is apparently going to be here next week with cages and gasoline to set us all on fire to turn us black, which is where black people come from, we guess. And we also doubt that it would be of any comfort to her that Iran and ISIS actually hate each other, what with the whole Shiite/Sunni thing. But we have to say: few people are as adept at loving America like Andrea Shea King, who's apparently willing to execute vast numbers of Americans to prove it.

And not that a minor detail like this matters, but by our (admittedly one-pass) count, of the 50 Democratic members of the House and Senate whom CNN has confirmed will skip the speech, 18 are members of the Congressional Black Caucus. Why are they all so obsessed with skin color at a time like this, huh?