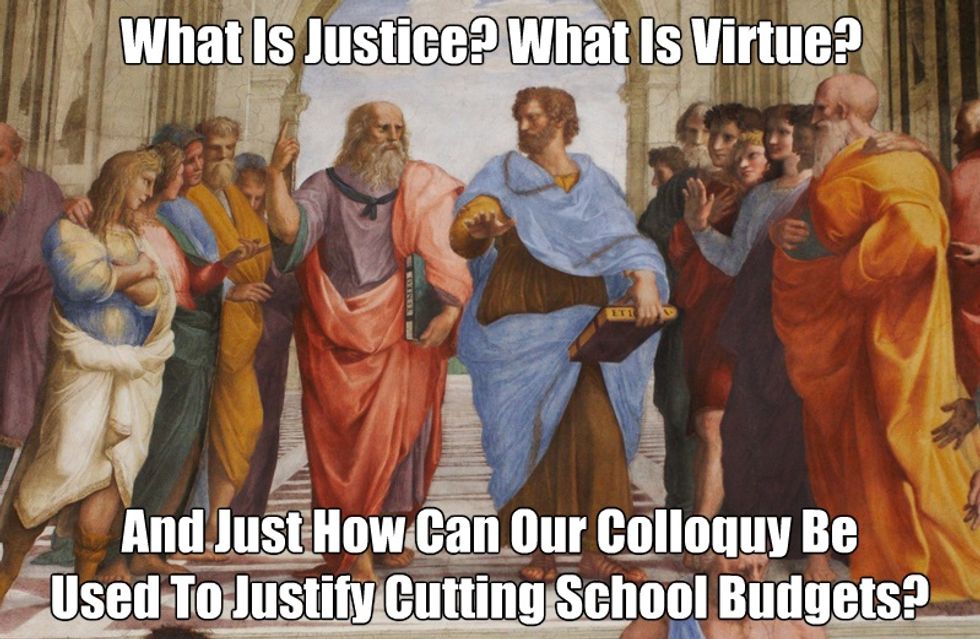 We're not sure we'd go so far as to say that we miss Eric Cantor. But we sure are impressed with the intellectual firepower of Dave Brat, the Tea Party twit that replaced him. In a meeting of the House Education and Workforce Committee Wednesday, Brat explained why we shouldn't get too het up about education policy and federal funding for public schools, and that is because the best will always just naturally rise to the top like they always have in history:

The greatest thinkers in Western civ were not products of education policy. Socrates trained Plato in on a rock and then Plato trained in Aristotle, roughly speaking, on a rock. So, huge funding is not necessary to achieve the greatest minds and the greatest intellects in history.

We think that's pretty special, ol' Socrates just sitting on a rock and training Plato in, whatever that's supposed to mean. You'd almost think that Brat has no idea that the Athenians actually had the reading and the writing and the buildings and crap like that. Nah, just sat on a rock. And it's true, Socrates, Plato, and Aristotle didn't need any lesson plans or government bureaucracy, and just look at how well they turned out! Of course, that one really smart Athenian slave kid that history never heard of because he died at the age of eight probably could have come up with some pretty good ideas, too, but those are the breaks. The point is, the best will be just fine. But even though he seemed willing to just toss public schools out altogether, Brat did acknowledge that we seem to be stuck with the darned things, even if they're completely ineffective in teaching even the simplest thing:

And so with that said, we do face huge challenges, in our kids coming out of the high school system right now, if we ask them what a business is, we'd be challenged to get a good answer. We all talk about skills and all this kinds of things. So we have huge challenges; I want to work together on that. Our kids do compete against India and China, etc. right now in a global economy, and we're not winning. And economics is a win-win; it's not that India and China should lose, we can all trade together and get rich together and so it's a win-win thing. [...]

We can all do better; I think if we really want to do better, we need to get private sector folks into every single one of our schools, get the CEOs in the schools and move beyond this, this narrow policy debate, and really have a revolution ... Our kids do not know what a business is when they graduate from high school. They need to know that. So we can talk skills and this, that, and the other thing, but we're not going to have any success until we do work together at that much higher level and shoot for true success for our kids.

For one thing, the schools need to teach word salad skills a lot better. By the end of his three or so minutes, we were half ready for Rep. Brat to thank everyone for choosing him as Miss Teen South Carolina. For another, is he really sure about that business thing? We've personally seen, with our very own eyes, plenty of high school students who are capable of walking into a store and making a purchase without the least hesitation. Or who can sell us a taco with only minimal assistance. Can't say we've ever seen a teenager confuse a business for a church, a gazebo, or a funicular station. But perhaps we've just seen a particularly gifted group of teens. In any case, if we merely fill our high schools with CEOs, we'll soon have a whole bunch of budding Aristotles going around starting businesses, because if there's anything the Greek philosophers are famous for, it's for teaching on rocks and being entrepreneurs.

Oh, also, the Republicans on the committee Brat serves on want to change the way federal funding for students living in poverty is allocated, so that even less money goes to schools in poor communities and more to middle and upper-income districts. Rep. Brat is willing to provide each urban high school with a nice rock, however.