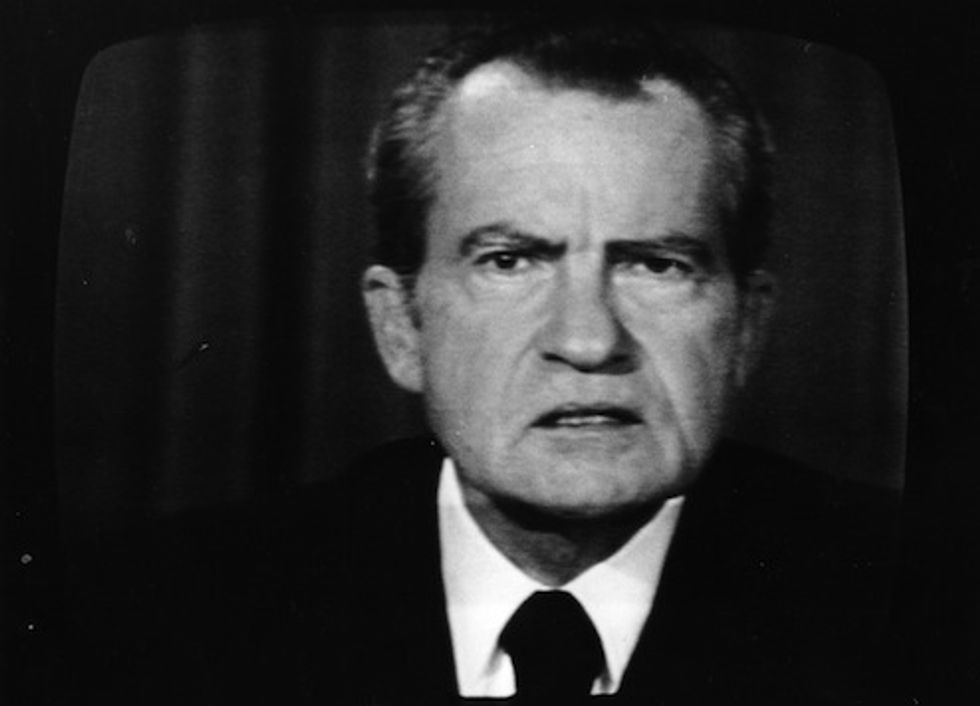 Part of being a world-class news organization/recipe hub/lit blog/mommyblog like Wonket involves subscribing to the email lists of organizations we would otherwise like to pretend are too abominable to exist in a just and rational universe. Which is why emails from Tea Party Nation with subject lines like “State of the Union: Liberals are the New Nazis” keep landing in our inbox, right next to our latest credit card statement (oh high-interest debt, you will be paid off/defaulted on some day!) Let us read on to discover how lapsed Jews like us are really embracing Nazism!

In the last fifty years or so, the left has tried to portray the Nazi Party of Germany’s Third Reich as basically the Republican Party on mild steroids.

This is backwards. Our orders, which we receive during our monthly séances directly from Emma Goldman’s disembodied head when it materializes in our gay psychic’s fetish dungeon, are to say that it is the Republican Party that is basically the Nazis on mild steroids. You would think that after fifty years these guys could at least get that part of our devious plot correct! We are sure Tea Party Nation regrets the error.

Every Republican President, even the liberal Republicans like Nixon, Ford and Bush, are compared to Hitler.

Nixon sure was a fantastic liberal, what with the Red-baiting and the war-mongering and the anti-Semitism and the telling Strom Thurmond, the Senate’s most beloved segregationist, that he would pay lip service to integration so people would think he was open-minded, but once in office would not actually do anything about this country’s intractable racial issues so as to not upset the delicate fee-fees of the Southerners like Strom who were still worked up over the end of America’s apartheid state. You know, that group we refer to today as “the Republican base.” If that is liberalism, the GOP can have it.

As for Ford, does he even really count as a president? He was in office only long enough to pardon Nixon and lose an election to the even more liberal Jimmy Carter, who ushered in the socialist utopia that nearly destroyed America before Ronald Reagan rode into the White House on his personal velociraptor to set things right. And George Bush, assuming they mean the first one? Raised taxes. Obvious liberal. You got us there, Tea Party Nation.

The left would compare Republicans to Satan but they don’t believe in God. On second thought they do think Republicans are the spawn of Satan but with the left, logical inconsistencies have never bothered them.

Actually, the logical inconsistency of “Cut taxes to reduce the deficit” has been bothering liberals (defined for our purposes as “people who understand math”) for, oh, better than thirty years now, but never mind. We do not think Republicans are the spawn of Satan. We simply say, isn’t it interesting that the Dark Lord Lucifer has never publicly denied fathering any Republicans? We’re just asking questions here, and as Our Lady of the Perpetual Martini and known Republican Peggy Noonan has assured us, it is irresponsible not to speculate!

Unfortunately with the left having achieved its goal of political dominance, liberals are looking more and more like Nazis every day.

Okay, we have caught our breath. If having a moderate in the White House and a narrow majority of moderates in one chamber of our bicameral national legislature is enough to achieve political dominance, no wonder these guys are so terrified. We should probably take away their guns, for public safety.

How could those “tolerant” liberals be so Nazi like?

How indeed. We will now take off these Gestapo uniforms and huddle in our shame closets, for America.