Tea Party: We Put Karl Rove In That Nazi Uniform *By Accident* 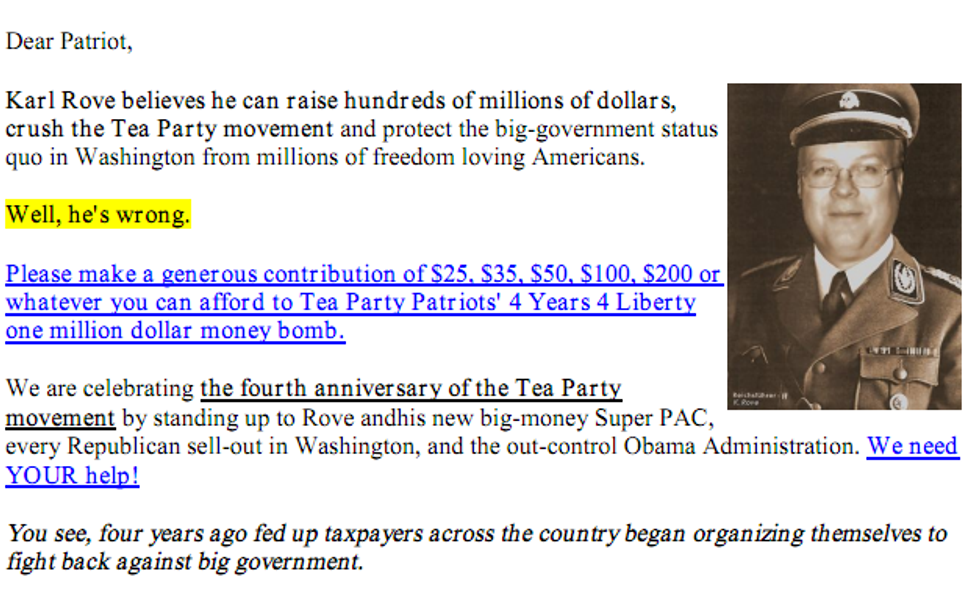 Hey there fellow mommybloggers! Remember that time your DC (DARLING CHILD, IDIOTS) had a slumber party and you let them stay up and gallivant about until finally, at four in the morning, you busted into their room screaming like a crack mom to SHUT UP SHUT UP SHUT UP because they were fighting and yelling like cats in heat? And when you got in there, they all had their pajama shirts off and their little bodies were glistening with spit? And you yelled YOU BETTER NOT BE DOING SEX STUFF IN HERE, and they said "We're not doing sex stuff! We're just having spit fights!" And then they all explained that the spit fight had started BY ACCIDENT because they had all punched each other in the head BY ACCIDENT?

Well, that is exactly how some dumb Tea Party group sent out an email featuring Karl Rove in a Nazi uniform. BY ACCIDENT!!!

Let's hear all about it, shall we?

Tea Party Patriots said that a fundraising email sent out Tuesday showing a manipulated photo of GOP operative Karl Rove wearing an S.S. uniform was a mistake that the organization "did not know about or approve."

"We apologize to Mr. Rove. While we may have strong disagreements with Mr. Rove on the future of conservatism, we want to be clear this imagery is absolutely unacceptable and are working to ensure this type of mistake doesn’t happen again," read the statement.

Active Engagement, L.L.C., which sent the email, claimed responsibility for accidentally including the image. Read their explanation:

An email that was sent earlier today under the banner of Tea Party Patriots included an offensive image of Karl Rove. The image was obviously a photo shopped image of Mr. Rove, a well-known political figure. The image was selected in error from an extensive group of images available publicly online and was adjacent to the image that Tea Party Patriots approved for use. The email that included the image was not approved by Tea Party Patriots. Active Engagement, L.L.C. takes full responsibility for this error and is attempting to contact everyone who received the image to explain the error. More importantly, Active Engagement, L.L.C. apologizes to Mr. Rove for this mistake. Active Engagement, L.L.C. does not believe there is any place in political discourse for images such as these.

There you have it. There you also probably have basements full of 9-year-olds covered with spit. Somebody should probably check on that.