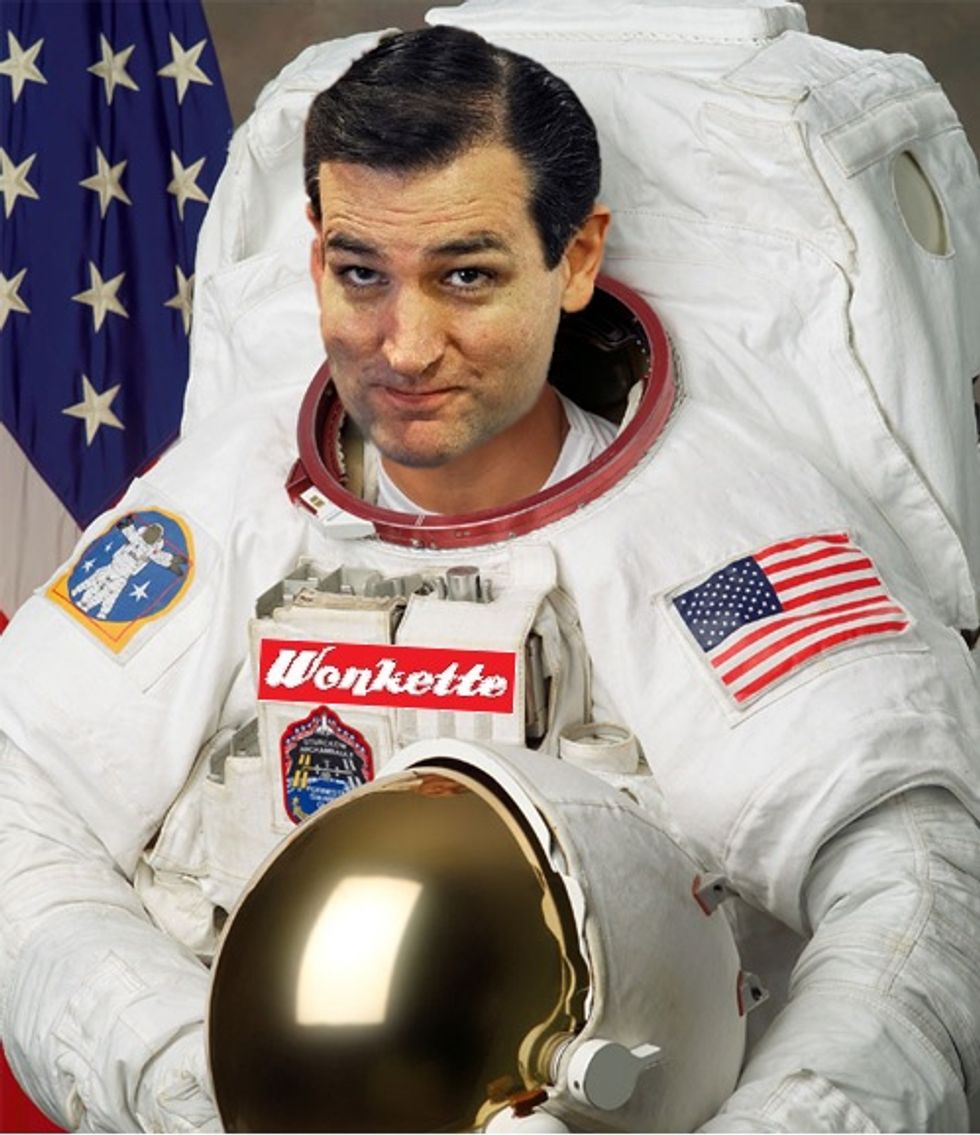 Hey, how about that exciting NASA flyby of Pluto? The incredibly cool New Horizons spacecraft passed within about 7,800 miles of the dwarf planet, and got the most detailed photographs of its surface ever. And Sen. Ted Cruz, who fancies himself a huge fan of the Final Frontier, was pretty jazzed about it too, telling Politico, "This is a historic milestone in space exploration," and informing the National Journal that this was an example of "NASA doing what it does best, pushing the boundaries of our imagination by traveling to the unknown." Because, as we've noted before, what Ted Cruz thinks NASA needs to be doing is concentrating on stuff that is far away from Earth -- the real space science, not all the stupid wasteful research that NASA has been doing on our own planet, which isn't in space at all, and also isn't even good science, as Ted Cruz understands science. Which is badly.

Ted Cruz is simply not a fan of these dumb NASA scientists who refuse to look to the skies -- or at least, not high enough in the skies, because what's actually in our own planet's atmosphere belongs to the fossil fuel industry, and NASA shouldn't politicize science by getting in the way of scientific progress with a lot of wild predictions about climate change. As he lectured NASA administrator Charles Bolden at a hearing in March, NASA is about being inspiring and space-oriented and doing cool stuff like going to the Moon, not about being depressing and Earth-looking-at:

But I would suggest that almost any American would agree that the core function of NASA is to explore space. That’s what inspires little boys and little girls across this country.

After all, no children in the history of the world ever got excited about how carbon dioxide is making the planet unlivable, and there's nothing at all inspiring in the quest to stop global warming, there just isn't. Go look at some planets that don't have lobbyists, will you, NASA? Cruz has actually won at least part of his battle against NASA's stupid satellites that look at Earth, convincing his pals in the House to slash NASA's Earth-science budget.

Funny thing about planetary science, though: as Mother Jones columnist Tim McDonnell points out, there aren't any other agencies in the U.S scientific establishment, or private industry, to take over NASA's climate research. And of course, it's NASA satellites that collect the very data Cruz misinterprets to call climate change a crock.

Worse, says McDonnell, "it's pretty hard for scientists to make sense of what they see on other planets if they don't understand the one we're on."

In pretending there's a fundamental difference between Earth science and space exploration, Cruz pretty much misses the point of science. It's all connected, as the Union of Concerned Scientists' Andrew Rosenberg told McDonnell:

"It doesn't make sense to pick out one achievement as if it isn't built on all this other basic research—everything from material science, to Earth science, to developing new instruments," he said. "It's not as if you have a standalone program for space that doesn't depend on a huge number of other fields."

Consider, for example, data about a new planet's atmosphere, gathered by a passing spacecraft. What can scientists compare that to, if they don't understand the Earth's atmosphere, Rosenberg said. "The same goes for water, the motion of continents, and everything else we'd want to know about some far-off planet."

Yeah, but there aren't any votes or lobbyists on those far-off planets, which is a pretty significant factor to overlook, Mr. Science Man. Another guy who is a scientist, astrobiologist David Grinspoon, notes that we've already applied discoveries from extraterrestrial observations to our own little blue world:

He pointed to the hole in the ozone layer as a classic example: Scientists were first alerted to the possibility that the use of certain chemicals on Earth could erode the ozone by studying the atmosphere of Venus.

Happily, when the international scientific community came to a consensus about solving the ozone hole, the world took action, instead of listening to idiots like Ted Cruz, who think that science should only study stuff that won't be bad for campaign donors, or who claim -- as many did in the fight to ban ozone-depleting chemicals -- that any action would destroy the entire world economy.

In any case, it's time to take action: How soon can we send Donald Trump to assess possible golf course sites on Pluto?