Ted Nugent: 'Ride Into That Battlefield,' Behead The Democrats This Fall 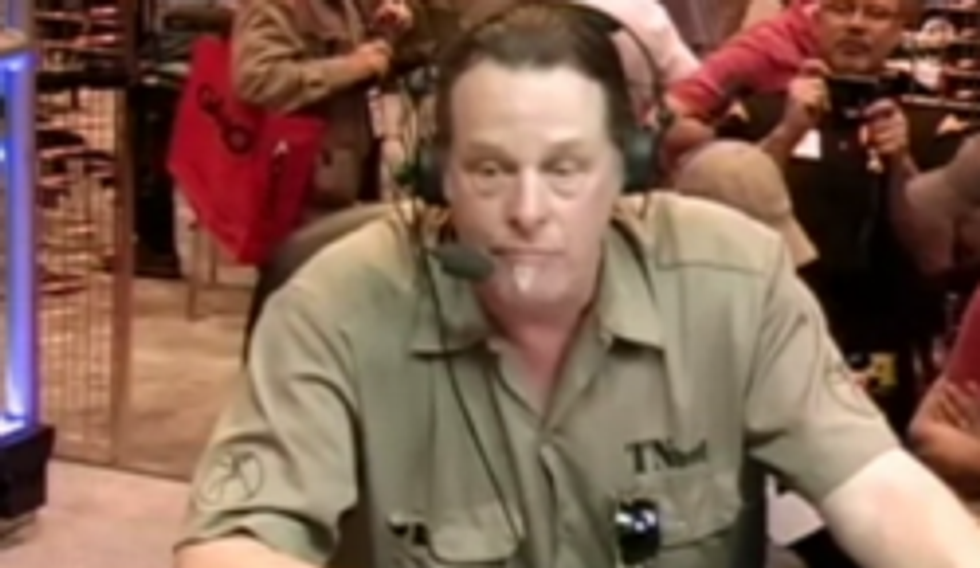 We have found the one musician who would not be enraged to find one of his songs used without permission at a conservative orgy somewhere in America: he is of course Ted Nugent, who attended the NRA's annual ball gala cotillion this past weekend to sing "songs," show his support of fast-acting weaponry, and tell America that they should vote for Romney this fall and also as a consequence behead the Democrats. In an America-themed blouson and trusty camo cowboy hat, Nugent proclaimed Obama's camp to be a "vile, evil America-hating administration” that is "wiping its ass with the Constitution."

Offstage, Nugent, wearing what appeared to be a casual military uniform, even though he dodged the Vietnam draft (HUNTING IS LIKE WAR!), let loose his ponytail to speak to a near-empty table while wearing an earpiece tasked with injecting the appropriate message into his ears from his home planet. Things he wants you to know, besides the fact that the Constitution is toilet paper to the Dems, who need to have their heads removed: "four" Supreme Court justices don't even "believe in" the Constitution:

Some guy in a camo baseball cap was nodding his head while Nugent was saying this, as if to say, "Oh yeah, I remember seeing that go down on C-SPAN."

...My brain can't accept the information.

We'll be a suburb of Indonesia next year.