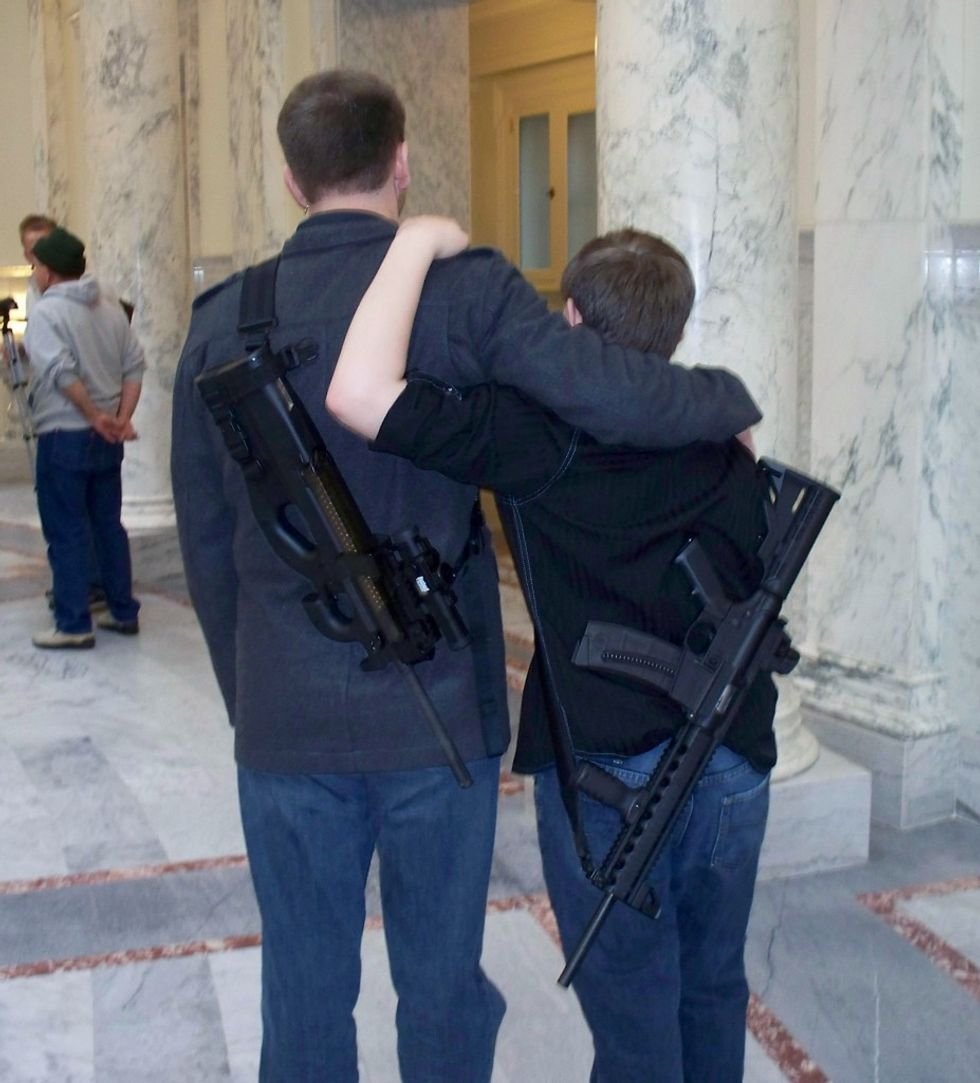 Guns! Can live without ‘em, and with ‘em, well, we can’t live! I tell ya! But however much Obama and the Kommunist Youth aretrying to take your second amendment gun fondling rights, you will always be able to keep your semiautomatic lead sprinklers, no matter how much we sensible people might try to grab them. However, there is a new, unmotivated threat to your perfectly reasonable second amendment requests. That is *cue dramatic Bum Bum Bum* REASONABLE TEENZ! That’s right, we’re loud, we’re proud, and just let us get back to playing Fallout New Vegas already, jeez.

First of all, violent videogames HAVE NOTHING TO DO WITH TODAY’S TOPIC. Anybody that implies they do will be prosecuted. Anybody that directly says so will be banished. Anybody that tells me in Call of Duty will be shot and their avatar will be teabagged. Hold your damn horses, next weeks kolumn will be about that very topic. The VIDEOGAMES, not the teabagging, get your mind out of the virtual gutter.

Teenz, especially Teenz with a Y chromosome and the stoopid that it brings, like guns. Srsly, they are friggin cool! Just look at them! And they go bang and destroy shit! What’s not to like? I am one of the few teenz in Idaho that does not own a gun, and possibly the only one that has never fired one. Perhaps it is an Idaho thing. We watch shows about building guns, shows about firing guns, and even shows about comparing guns. If somebody made a show about watching a show about guns, we'd watch that, too. At a gun show.

However, we understand that there is a limit. Even for those of us whose idea of a good time is spending a day in Cabela’s (not kidding, I know multiple), the fact that NOBODY needs more than maybe a 9mm is pretty obvious. Even I can be heard talking at times about, say, the gun on an A-10 warthog, but I don’t want one. Teenz have come to the realization that some of their NRA-hole parents will never accept: we don’t need that shit.

What Teenz are having trouble with is why the hell anybody thinks they need an AR-15. No matter how many times you watched Red Dawn, a redneck with a rifle cannot take down a tank. Even WE can see that. It is something made to kill people, and only to kill people. No matter how many times you say zombies, or home defense, the only purposes for an AR-15 are fondling and mass murders. And, considering the recent trend of school shootings, we are the ones put in danger by this.

Now, if you will excuse me, I am going to shoot, stab, bash, ignite, and disintegrate as many virtual people as I possibly can.

Kid Zoom is a high school sophomore in the wilds of Idaho. He is Doktor Zoom's spawn. He thinks that his Teen Korner column would be vastly improved if Dad would buy some thousand-dollar graphics card for his computer. Nice try.