Teen-Molesting Kentucky Pastor AND GOP Rep. Will Deny It All Till He's Orange In The Face 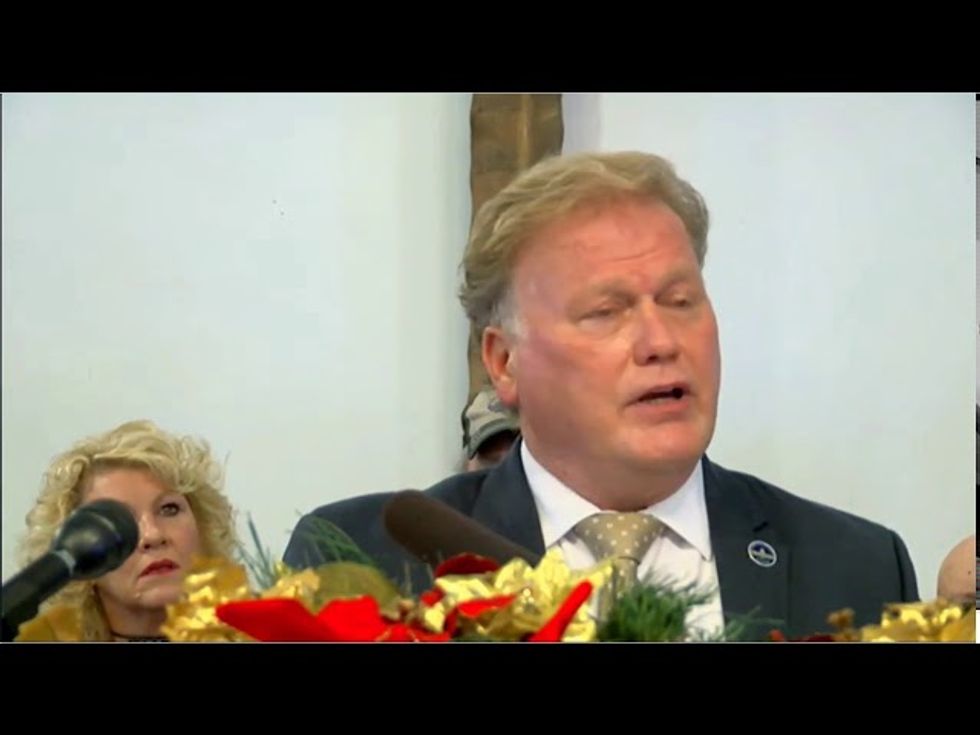 Update -- Representative Dan Johnson committed suicide on Wednesday afternoon. He left a note. Our killermartinis has thoughts for all of us here. And a reminder, if you need it: We here (and in the comments) don't wish pain or hell on people, except sometimes Dick Cheney.

Welp, just as soon as we rid ourselves of one (credibly accused) redneck, God-shielding, child molesting sex predator, another one comes along right behind it, like a disgusting never-ending human centipede of sexual assault. Kentucky State Representative Dan Johnson has been (credibly accused) of rape, and the details are what can best be called seriously horrifying.

In 2012 on New Year's Eve, Dan Johnson hosted a party. One of his party guests, 17-year-old Maranda Richmond, fell asleep on his couch. She woke up a while later to Johnson kissing her on the forehead. At first she thought this was "fatherly," but when he moved on to forcibly put his hand under her shirt and grab her 17-year-old boob, and then shove his finger into her 17-year-old, unwilling vagina, this was not fatherly at all and Miss Richmond was, naturally, explicitly, and visibly upset. She told him no, and to get away, and Johnson told her she would like it. Now Dan Johnson argues that people who are elected are just people, and people are not perfect, and he did not do any of this and it is all a lie brought about by NPR and this current frenzy of accusing political people of the sex stuff they do:

It is the season. Last election it seemed to be racism. This election it seems to be sexual impropriety, Johnson complained. People want to go back over my whole entire life...There is no reason I would resign.

Did we forget to mention he was her pastor? Did we also forget to mention that he was once arrested for insurance fraud and car arson like a common Darrell Issa? Because it's no "molest a girl you're pastoring," but he did that too.

The problem with that idea is that Maranda Richmond reported this to the Louisville police in 2013, and we do not think it was because she was getting a jump on being able to accuse people of things four years later to screw with an election. Also, you ain't gotta be perfect to know thou shalt not put your hands in the pants of, and your finger inside, anyone, including if not especially, a "groggy" 17-year-old who is asleep on your couch.

According to the state law of Kentucky, forcible penetration of one person's sex organs with any part of another person's body -- which would include a disgusting old man's finger -- that is rape, and rape is against the law in a major felonious kind of way even if the police in Louisville don't do anything about it the first time it is brought their attention. It'd be real good though if maybe some public questions as to why exactly they did not do anything could help persuade them to re-open the investigation.

Also, we probably should go back over Dan Johnson's entire life because it seems pretty certain that this is a thing Dan Johnson might have done before or after he has been (credibly) accused of doing it this time.

Naturally, Dan Johnson held a press conference to say he is not going to resign in his [Liar, Liar] "Hearts On Fire" church, and before he told the congregation of media people that he did not fingerbang a teenager against her will, he sang O Come All Ye Faithful, like you do, with backup singers behind him, because he never did what this girl is accusing him of, that she reported to the police in explicit detail four years ago. This girl did not even "wait 40 years to come forward." She went to the police after it happened and the police did nothing except close the case and they haven't said why exactly they did that yet.

As for the "last election it was racism," part of his defense, Dan Johnson should know, because he got into all kinds of non-trouble when he put several posts on Facebook calling the Obamas monkeys, because he is an unoriginal racist as well as an alleged rapist. Dan Johnson got elected after the people in his district knew about the racism. Now we get to find out if the representative who has been (credibly accused) of rape will get to stay that way.