Televangelist Assholes Pretty Sure Manchester And London Asking For It, Like Common Godless Sluts 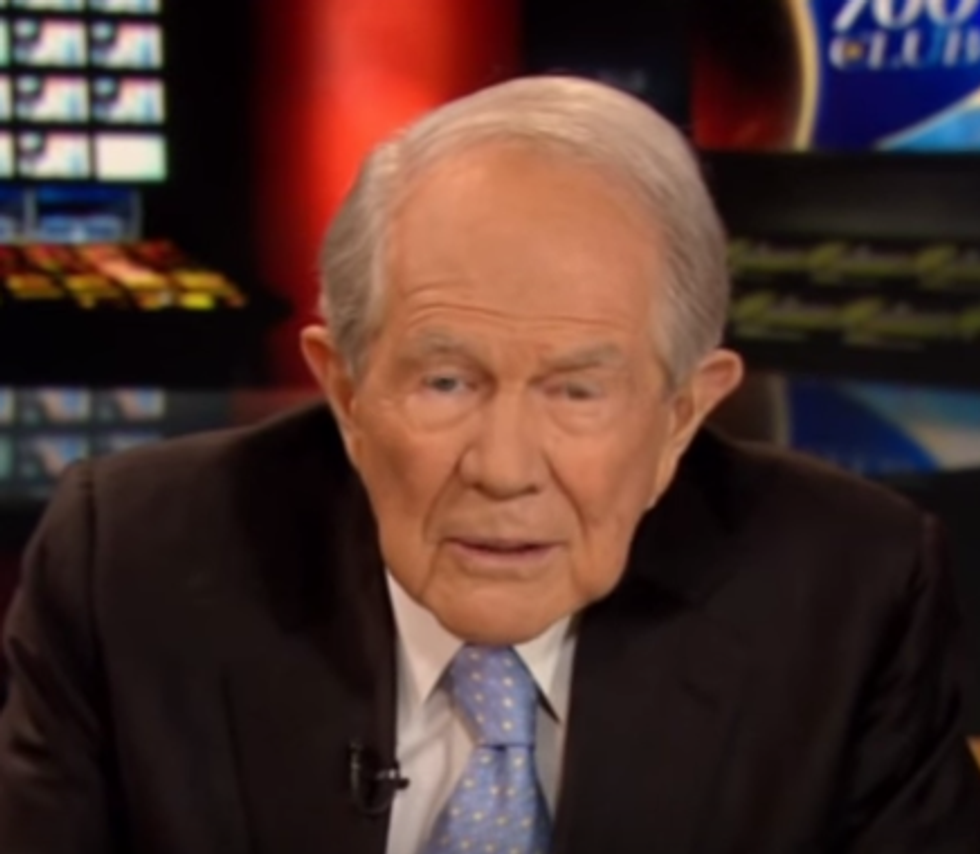 It's a truism that when something terrible happens, be it terrorism or a natural disaster, certain wingnut Christians will declare it to be an act of judgment by a loving God, as a comeuppance for some sin or another. Hurricane Katrina? Gays. Those awful tornados in Joplin, Missouri, a few years back? Gays and abortion and porno. Hurricane Matthew? Totally the fault of Orlando and Savannah, which are known sanctuary cities for gays. Haiti earthquake? God's judgment against voodoo doers who do voodoo. 9/11? Gay abortion pagan feminists. Family Research Council hate group leader Tony Perkins losing his Louisiana house in terrible floods? Totally random. (How'd that one get in there? Our bad.)

Anyway, Pat Robertson and Jim Bakker (who advanced some of the theories above, or others just like that!) are at it again, explaining why terrorism happened to Manchester and London, and their explanation is basically, "bitches be askin' for God's wrath to rain down on them, probably because they were dressed like sluts." Or something.

Here's Jim Bakker on the Manchester victims, some of them children, who just wanted to go see Ariana Grande and have fun that night:

What was the name of that concert? ‘Dangerous Woman concert.’ [...] they literally invited these kinds of things to happen. They almost cursed themselves with this concert. I tell you what, God’s not going to put up with mockery. ‘Be not deceived, God is not mocked.’

It was the "Dangerous Woman Tour," and we guess in Bakker's mind all those people were mocking God at that concert (which sounds a lot like NASTY WOMAN TOUR to Jim Bakker) by crucifying unborn babies while wearing short skirts and making lesbian to each other, all while checking UberEats to see if they can get #Pizzagate delivered to their houses, instead of going to Christlike Lady Tour, which involves no singing, no dancing, and certainly no talking, because ladies aren't supposed to do those things.

Jim Bakker knows, because God speaks to him and tells him which color panties to wear when a bad thing is about to happen.

Ladies and gentlemen, you can’t keep somebody from wanting to die. You can help them get better, but if they want to die, it’s really hard. And if the Brits and other people in Western Europe want to die, if they figure that society has come to its end and they want to end it, well, Islam is certainly providing them a way to do it.

This one is a bit more confusing, but Grandpa Pat was talking to Dale Hurd, a "reporter" for Christian Broadcasting Network, who was advancing a conspiracy theory that people at high levels of the British government were letting Islamic terrorists do attacks because Brits ALL WANT TO DIE. His point was that "political correctness is so important" to liberals that they worship Islam, which means they want to die at the hands of the "barbarians from Asia." Pat Robertson, having his light bulb moment, asked "So this is really a death wish?" Then he launched into the conclusion above, which makes ... literally no sense at all.

But Pat Robertson also knows that of which he speaks, just like he totally knew what he was talking about when he consoled one of his pretend "viewers" who "wrote in a question" by reminding them that if little children die, it's entirely possible God killed them because they were going to grow up to be Hitler. Another time he answered a "reader question" from "Cynthia," telling her it's technically not a sin to post pictures of your kids on Facebook, as long as you're aware that witches will curse your baby pictures, which will lead to demons entering your kids' bodies and oh god next thing you know they will be at Dangerous Woman Concert with Ariana Grande and oh fuck it you know what happens next.

Can we be done with these senile old fake-ass "Christians" now? Yes we can.