Tell It To Clinton's Dick, Lindsey Graham And Jeff Sessions! 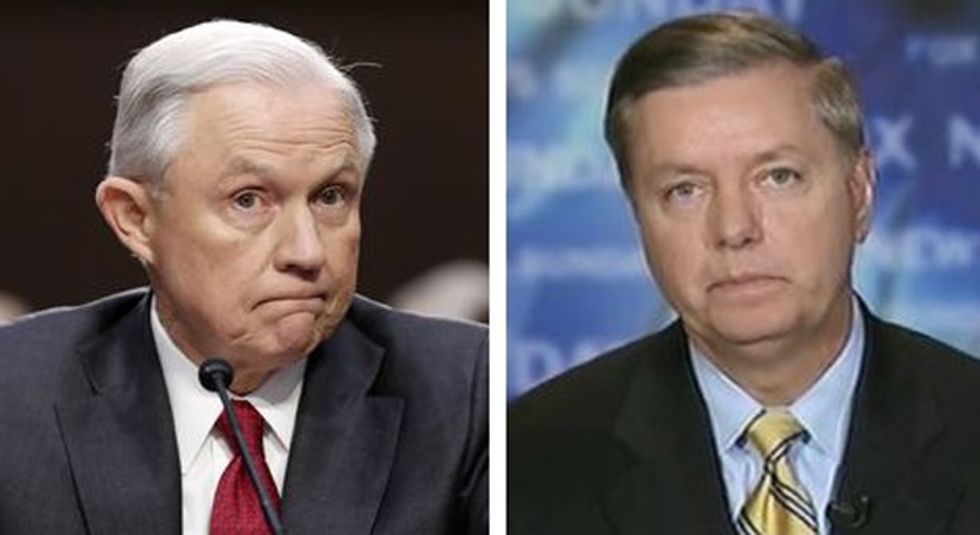 We're learning all sorts of important new legal theories from the Republicans this week, starting with Donald Trump's dumb lawyer John Dowd and his insistence that the president of the USA can't actually obstruct justice. The thinking goes like this: Donald Trump is the nation's top law enforcement guy, so if Trump told James Comey not to look at the Trump campaign and transition staff's contacts with Russia, then that's just a law enforcer setting law enforcement priorities. No different than a police chief ordering a cop to take that breathalyzer away at a traffic stop. OK, not the best analogy. But the real point is, by grace of his position at the top of the law enforcement food chain, a president just can't obstruct justice.

Funny thing! When Attorney General Jeff Sessions (vomit) was still a mere member of the Senate, that particular legal assessment of whether a president could obstruct justice didn't seem to occur to him, at least not when it came to Bill Clinton. In 1999, Sessions said in an interview on C-Span,

I hope that he can rebut that and prove that did not happen. I hope he can show that he did not commit obstruction of justice and that he can complete his term. But there are serious allegations that that occurred.

Not a word about Clinton being immune there thanks to his being the nation's top law enforcer, though, to be sure, Clinton never fired an FBI director who was investigating him. (He fired William Sessions, who wasn't investigating him, but kept Louis Freeh -- who was.)

Then when Sessions voted to remove Clinton from office -- on, among other charges, one count of obstruction of justice -- Sessions noted Clinton's status as the nation's top law enforcer. But in Sessions's assessment at the time, that didn't make Clinton immune from obstructing justice; it made him even worse!

It has been proven beyond a reasonable doubt and to a moral certainty that President William Jefferson Clinton perjured himself before a federal grand jury and has persisted in a continuous pattern of lying and obstructing justice. The chief law enforcement officer of the land, whose oath of office calls on him to preserve, protect, and defend the Constitution, crossed the line and failed to defend and protect the law, and, in fact, attacked the law and the rights of a fellow citizen.

Then we have Lindsey Graham, who insisted that Michael Flynn's guilty plea on a charge of lying to the FBI had no larger implications for the Trump/Russia investigation, since, Graham explained on "Face the Nation" this weekend, "what Flynn lied about is not a crime." Graham didn't try to say lying to the FBI wasn't a crime, mind you, but the thing he lied about? No big:

I don't think it's wrong for a transition person to talk to a foreign government about change in policy. I don't think the Logan Act is worth the paper it's written on.

Now, before the election, that would be another matter, said Graham. Collusion between the Trump campaign and the Russians would be very, very bad, he explained, but once Trump was elected -- but not yet in office -- it was probably just fine for Flynn to contact Russia to make plans for a beautiful future of peace and harmony and cooperation, also lifting sanctions, please, even if Barack Obama was technically still president.

Of course, Bill Clinton lied about something that wasn't a crime, either, but that was serious business, which is why Graham pushed for Bill Clinton to be impeached in the House, then served as one of the Republican impeachment managers during the Senate trial, which nonetheless acquitted Clinton. Even so, Graham used his role in the impeachment trial as fodder for his reelection in 1998, to prove that he was the candidate of Law And Order. At a town hall early in his reelection campaign, Graham said the point is all about asking the hard questions:

"It's a time for the country as a whole to understand what went on here and where we're going to go,'' Mr. Graham said. ''What are the consequences of this case? What do you do with the next Federal judge who has got wandering hands in the office and someone's got the courage to say, 'No, you shouldn't treat me that way,' and he starts hiding evidence and getting others to lie for him -- what do we do with that case?"

Yes, Graham was talking about hypothetical sex-criming, not election-messing with a foreign government. But now, he seems a little less worried about a president who's hiding evidence and had people lying for him. Wonder why that might be?

Your Wonkette is obstructing THE BULLSHIT! Click here to keep us blocking it forever!