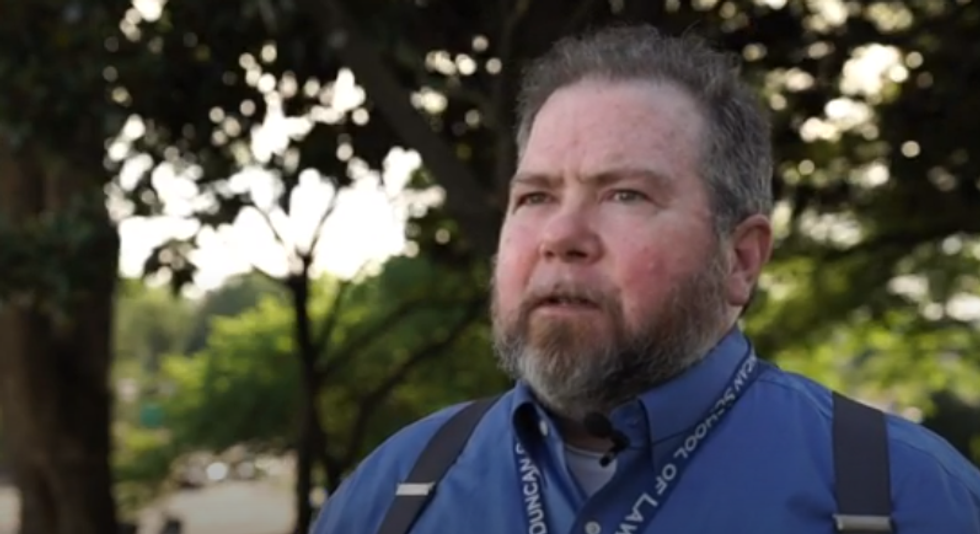 Jeff Amyx, God and Gay-fearing owner of Amyx Hardware & Roofing Supplies in Grainger County, Tennessee. has finally gotten some GOOD NEWS from the Supreme Court. His pickle was all in a tickle over the decision to allow a Colorado baker the right to refuse to make a cake for a gay wedding, so he decided to re-impose his own gay ban. Amyx is no stranger to hating on the gay, having made the news in 2015 for putting a "NO GAYS ALLOWED" sign on his shitty hardware store, because he's such a good Christian. And now he's heading for his box of crayons and scratch paper to design a brand new sign to warn away any Gay Agenda Thugs who might try to come to his dusty ass shop to organize it. Or shop there. Because, yeah, EVERYBODY is dying to buy things from bigots in East Tennessee. On my way never ever the fuck ever!

What is Amyx really afraid of? Perhaps he fears being schooled by a gay Bob Vila on how to fix shit. Perhaps he worries God might see him sell some oak to a flashy gay man looking for "hardwood." Or maybe he's just an attention seeking troll who uses religion and shitty-ass chicken scratch signs to let everyone know he's an asshole and very proud of himself.

Last time Jeff Amyx pulled this stunt he got himself a Trumpian level of attention, so there is NO WAY IN HELL he is going to pass up a chance to roll out his permanent marker and bad handwriting to freshen up the decor in his shop. Tres bien! His new sign will need a bit of design assistance though, and we wonder how the fuck a hardware store owner can’t simply build a fucking sign? Dude, really? You literally have all the tools and supplies to build something decent. Lazy ass. Ron Swanson is looking at you in dismay, fool! Get yo woodworking skills up to par. Your sign was pathetic.

Not to be outdone by the histrionics of Aunt Pitty Pat from Gone With The Wind, Amyx rolled out his fainting couch and smelling salts to declare his absolute shock over the Supreme Court decision:

I was shocked. I was really shocked because of the track record of our Supreme Court ...

Please note that “Christianity” was also used to explain why “Red Savages” must be murdered and “Black Savages” must be enslaved, and now I suppose “Gay Savages” are here to get vengeance for us, thank you very much. Please calm down, these are just history facts. Although if “Gay Savages” just so happens to become a Netflix series or a band name, I demand credit for the idea.

Amyx's bitter ass goes on to discuss his fear of the looming cloud of pain and horror ready to wash over him in the future, because evil gays are obviously coming to STEAL HIS JOY. He just wants to discriminate, but people keep ruining his life:

Christianity is under attack. This is a great win, don't get me wrong, but this is not the end, this is just the beginning," Amyx said. "Right now we're seeing a ray of sunshine. This is 'happy days' for Christians all over America, but dark days will come.

Will somebody please explain how Christianity is being abused? I cannot think of one right that Christians lost when gay people were allowed to marry. Is this like that White Genocide thing where white people are disappearing all over the world because feminists are eating Birth Control? Or is it similar to the “White Man’s Burden” of Dark People telling him to mind his own fucking business? Well, whatever it is, it sounds like bullshit just like the War on Christmas that's been bullying Fox News for years on end.

On the dark side, watching people like Jeff Amyx getting all jazzed up over this Supreme Court decision is vomit-inducing. On the bright side, at least the decision was a narrow ruling, so we'll be able to "Make War On Christianity" again very soon. (We kid!)

Stewart Harris, associate director of the Abraham Lincoln Institute for the Study of Leadership and Public Policy at Lincoln Memorial University addressed the narrowness of this ruling:

There're two very important constitutional issues here at least. On one side, you've got equality. It actually came to us in the form of a state statute, but still the idea is that the law has to treat everyone equally. On the other side, you've got the freedom of religion and freedom of expression," Harris said. "Of all those issues, the only one they even sort of tangentially addressed was free exercise of religion.

So basically, all the punkass dickholes so excited about this ruling that they're putting up "Straight Only" signs and separate rainbow-colored water fountains can knock that shit off right now.

Sure, I would love to see rainbow water-fountains because rainbows are awesome, but no, you cannot impose Gay Crow on America just yet. Just go to the wedding, eat some cake, and shut the fuck up already before Gay Jesus punishes your soul.