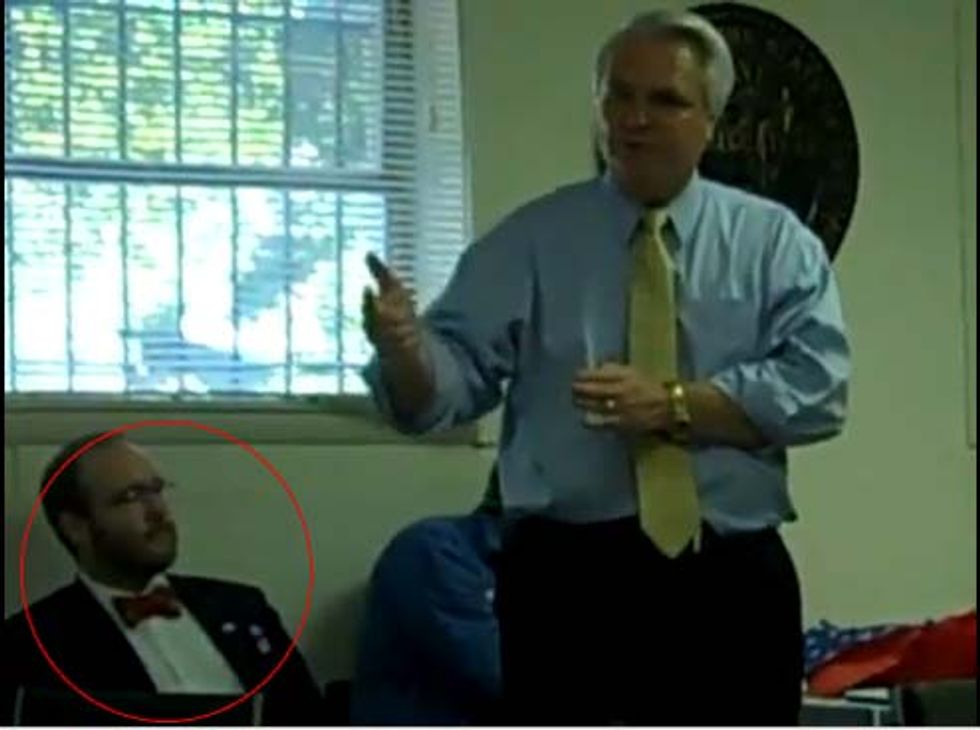 Jesus Christ, is everyone running for governor of Tennessee? In addition to Basil Marceaux,"Crazy Man James," and secessionist Congressman Zach Wamp, current Lieutenant Governor of Tennessee Ron Ramsey is fighting for the Republican nomination. But Ramsey isn't an actual lunatic and doesn't want Tennessee to break away and form its own pointless independent nation, so obviously he needs a "hook" to get the crazies who now determine the outcome of Republican primaries to vote for him. Hmm, how about calling Islam a "cult," will that do? Will that get you to pay attention, just for 10 minutes or so? Find out with video, after the jump!

So, yeah, this is Ramsey in ... the break room in a government building, or a senior center, or in an office at some low-slung office park somewhere? The headline on the YouTube video says "Chattanooga," so let's go with that. Anyway, if you want to avoid hearing the usual blather about debt and the country heading in the wrong direction and so forth and just see the Islam stuff, skip ahead to about 3:10 -- but you'll miss the sad, slow spectacle of the audience rapidly losing interest; by the time he gets to anything vaguely interesting, it seems like pretty much everyone else in the room is talking about something else, and not even bothering to whisper. So rude!

"Now, you could even argue whether being a Muslim is actually a religion, or is it a nationality, way of life, cult whatever you want to call it," is the fun quote, if your fascistic workplace blocks the YouTube. Ramsey also worries about the imposition of Sharia law on Americans (did you know that there are 22 communities already run by Sharia judges, right here on U.S. soil?) and seriously misconstrues a long-running controversy about a proposed Muslim community center in Tennessee (Talking Points Memo has the details, if you care).

Then he wanders off into zoning issues and it gets boring again. But, before that happens, he makes the mistake of admitting that he's only cared about the Muslim takeover of the U.S. for a few weeks! Now we must ask the question: does Ron Ramsey hate Muslims enough? For your answer, check out the individual sitting behind Ramsey -- presumably one of his staffers:

It's well known that, now that Tucker Carlson has given up bow ties, the only people who wear them are Black Muslims and George Will. And that doesn't look like George Will.

Ramsey also noted that he loves the 1st, 2nd, and 10th amendments equally, which means he is 100 percent in favor of gay marriage. Basil Marceaux will dispatch this gentleman handily. [TPM]