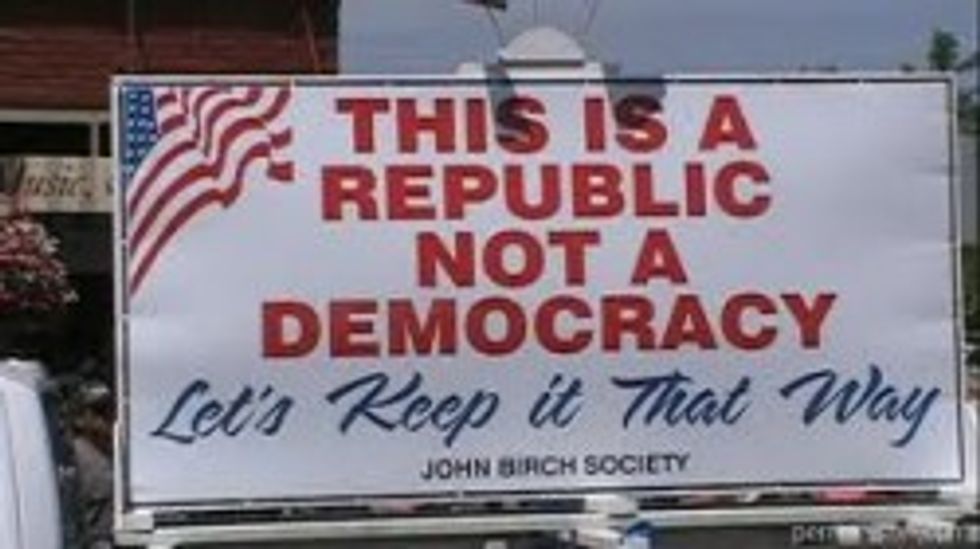 Some facts: Agenda 21 was created 20 years ago. And according to the United Nations website, this isn't some secret creepy thing that only Democrat Americans are into. It was "adopted by more than 178 Governments at the United Nations Conference on Environment and Development (UNCED)" in Rio de Janeiro, Brazil in 1992. And it has been supported many times, by many nations, using the UN's weird polite little verbs, since. So, one can only assume this means the world is being taken over by communists sprouting from every corner of the land. Or as Mike Turner, the state's (Democratic) caucus chairman, put it: “Elected officials actually think there’s a communist behind every tree."

Apparently here is what the GOP people in Tennessee think Agenda 21 will do: prevent houses from being built on mountaintops and babies from being born! Yes, that's it! A proponent of the bill to eliminate Agenda 21 forever, Rep. Glen Casada, had this to say:

It reads well. It has nice words like sustainability and helping the poor. But what these people want to do is they want to cap the number of people this planet can have. … So ladies and gentlemen, if that doesn’t bother you, if those words don’t scare you, we’ve got to talk.

That's OK. Interesting that Tennessee Republicans aren't a fan of letting gay people have children, or even mentioning the word gay in schools, but straight people ... do your thing! Constantly, as rabbits! But also, BE FREE to never never have abortions.

Rep. Rick Womick, another supporter of 'Don't Say Trees,' as we will henceforth call it, thought of two really, really horrifyingly good examples of how Agenda 21 oppresses people:

a Cocke County [!] proposal to ban building on ridgetops

You want them to do phwut now?