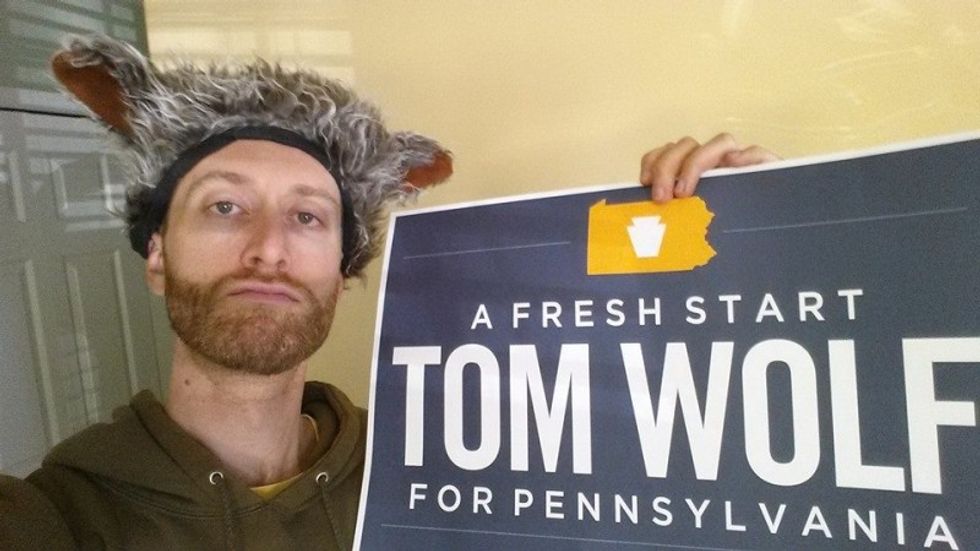 Tom Corbett is well on his way to becoming the first Pennsylvania governor to get the boot after only one term in office since the state began allowing governors to run for re-election… in 1968. Groovy!

Polls show Corbett trailing challenger Tom Wolf by more digits than you have on both hands unless you have, like, 13 digits, which in some cultures is considered a mark of sexual potency, probably, so don't sweat it.

Wolf's lead has actually narrowed in recent weeks, which is probably a good thing as there's some evidence (i.e. Nate Silver said it) that seemingly insurmountable leads in polls can depress turnout for the leading candidate as supporters think the race is in the bag. So here's the standard exhortation: Get out there and vote, Pennsylvania! It's up to YOU to decide how humiliated Tom Corbett will be.

For he is a man who deserves to be humiliated. Corbett was never as flamboyantly dreadful as some of his better-known peers like Scott Walker, Rick Scott, Rick Perry, Nikki Haley, Jan Brewer, Chris Christie, et cetera. His was was a stolid, workmanlike kind of fuckery, yet no less potent for all that. Corbett ticks every box on the list of things people hate about Republicans, but did so in ways that weren't even that amusing, no fair! Check it out:

Screwed the poor: Corbett reinstated a harsh asset test for receiving food stamps. Does your household have more than $5,500 in wealth crumbs, like dollars in the bank or maybe even a SECOND CAR, like some kind of Pharaoh? No food stamps for you. (We can't find the citation but as an exPAt who followed this, we're pretty sure Corbett's original plan was to include the value of a household's FIRST car in the asset test. It's all academic now anyway, as Wolf says he'll end the asset test altogether.) Also, he initially rejected Obamacare's Medicaid expansion and only recently reached a compromise to accept the funds with a plan that is -- SURPRISE! -- less generous than Obamacare intended.

Screwed teachers, students: Pennsylvania got a bunch of stimulus money for education under former Gov. Ed Rendell, and when that ran out, Corbett was like "Meh, let's just spend whatever we spent 3 years ago on education, minus five bucks. Should be plenty right?"

Fellated frackers: Got several million gallons of questionable fluid you wanna shoot into Pennsylvania's gassy bedrock? Plan to make a fortune doing this? Don't worry about paying any extraction taxes on that fortune in Tom Corbett's Pennsylvania. Want to do it in a state park, you kinky weirdo? Go nuts! Want a $1.7 billion tax break to build a poison factory that will kill people? Sounds a little sociopathic, but Tom Corbett really wants to help you out here.

Demeaned gays: Gay people getting married is practically essentially exactly the same as 12-year-olds getting married, "reasoned" Corbett this one time. But then he realized how ridiculous that sounded, and corrected himself: "I think a much better analogy would have been brother and sister, don't you?" ACTUAL QUOTE and NO NOT REALLY TOM.

Went hard for voter ID: But not too hard, because this spring he gave up the state's appeal of the State Supreme Court's decision to strike down PA's voter ID law. That's when we knew the fight had gone from him.

Pro-gun Chaos: Maybe some city in Pennsylvania wants to have a law that might keep them safer from getting shot? Dream on, some city! Corbett signed a law that says nobody's allowed to have stricter gun laws than the state already has. NRA, how's your dick? Good and sucked, by Tom Corbett? Enjoy it while it lasts!

So what about Corbett's Democratic opponent, Tom Wolf? Not sure. Business guy, they say. His partisans are furry cosplayers:

You know what, at this point? Fine.

So, as the Senate looks increasingly likely to flip to the GOP, try to remember that what's happening to Tom Corbett right now could be a preview of what will happen nationally in 2016, when voters are reminded (AGAIN!) that they actually hate the GOP's policies when they're tried in the real world.