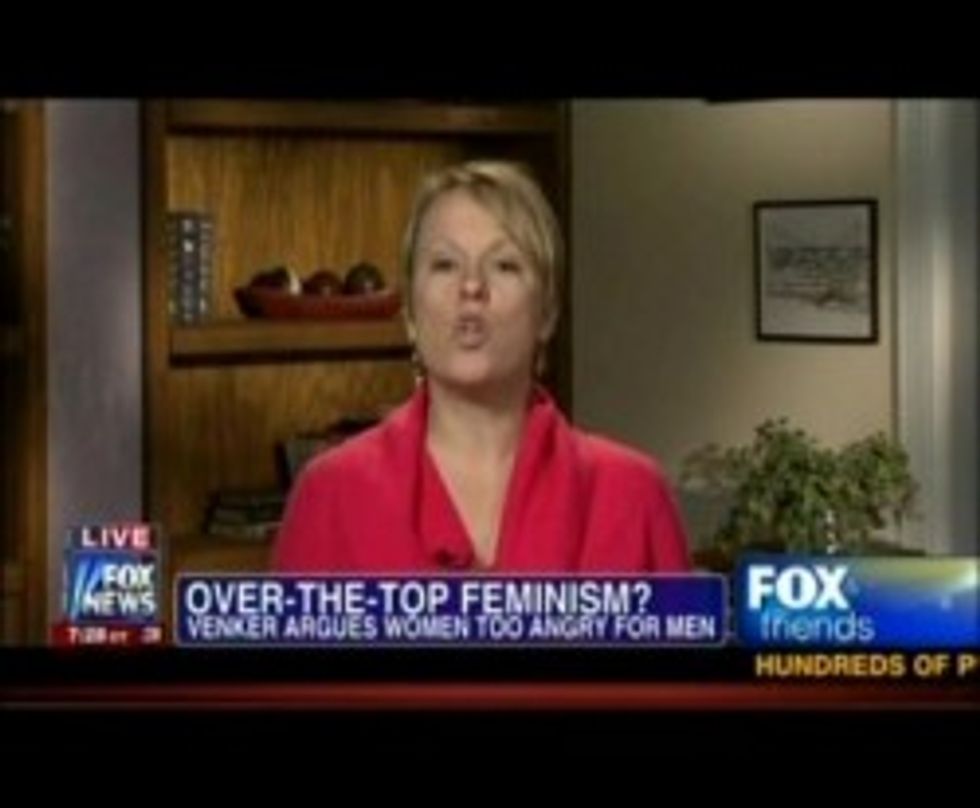 First Suzanne Venker, Phyllis Schlafly's niece, wrote a very nice"think piece" for Fox News that was only trying to explain to women for their own good that the way they were comporting themselves (like men's equals) was making men not want to marry them, because they (women) are angry hairy mannish whores. This made men angry, she said, but for some reason she did not tell the men to stop being angry? Only the women? That's so weird! Then she got flooded with hate mail and backpedaled her little tushie off, saying, Oh no no no, what I meant to say was that HUSBANDS don't like when WIVES are equal, which sort of eviscerated her claim that men aren't marrying women anymore because of women's gross feminism, since there are still husbands, and they are so grossed out. But now Suzanne Venker is pissed, y'all, and she is taking back her backpedaling and saying she was right all along (sort of like that Unskewed Polls guy did), and we should call a truce in the "War on Men" (a war we are conducting, again, by acting like we are "equal") because men like to kill things. Wait, what?

Lay some science on us, Suzanne Venker!

Here’s what we know: Females, in general, are nurturing and relational beings. They like to gather and nest and take care of people. They like to commiserate with other females – a lot. That’s why girls can talk for hours on end. It’s why more women stay home with their children than men. It’s why the teaching and caregiving professions are still heavily female. Not every single woman in the world falls into this category, but that doesn’t make the generalization any less true.

Males, on the other hand – in general – are loners. They’re content to mill about in their man caves. They like to hunt. They like to build things and kill things. If you don’t have a son, this may sound strange. But again, that doesn’t make it untrue – nor does the fact that not every single man in the world is like this. Men also take pride in caring for their families. They can’t carry babies or nurse them, but they can provide for them. So let them.

We'll just assume that the reason none of the men in our family likes to build things or kill things is because they are Jews. But that's besides the point! Let's instead ask ourselves why men liking "to kill things" is Suzanne Venker's stated reason that women should be submissive to men, take their names, stay home with the babies, not rub it in Dear Hubby's face when she has a job that pays all their bills, etc. What is Suzanne Venker trying to say?

Suzanne Venker is trying to say we should submit to our men so they won't Domestic Violence us to death, obviously, and who could blame them? Make better choices, everyone! Better choices.