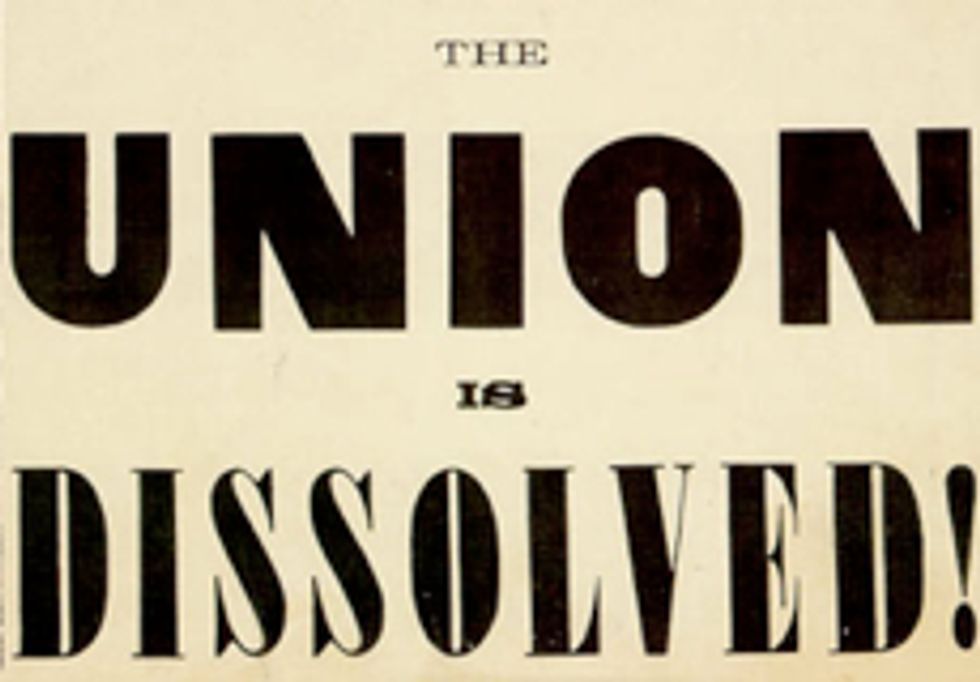 Mysterious Wonkette Texas operative "The Doctor" (RP?) has forwarded us a delightful e-mail (s)he received this morning, probably from a great aunt or uncle, that thoroughly explains how Texas has the resources it needs to secede from the Union, which it should do immediately, "since B. Hussein Obama won the election." Silly sheeple, onlynow they get it; the Paultards have been lobbying for this since January or August or whenever it was that Ron Paul stopped running. *FACEPALM*

And just like those glorious Paultard schemes of yore, this one features a number of lines that strongly suggest we're reading satire. (THE FIRST #2 IS A VERY GOOD EXAMPLE OF THIS.) (#9 TOO.)

But of course, it's not satire.

Subject: Here's what Texas can do !

from the Union . (Reference the Texas-American Annexation Treaty of

We Texans love y'all, but we'll probably have to take action since B. Hussein Obama won the election. We'll miss you too.

Here is what can happen:

Texas immediately secedes from the Union .

#2: George W. Bush will become the President of the Republic of Texas .

So what does Texas have to do to survive as a Republic?

1. NASA is just south of Houston , Texas . We will control the space industry.

2. We refine over 85% of the gasoline in the United States .

with Texas ," will take on a whole new meaning.

4. Oil - we can supply all the oil that the Republic of Texas will

need for the next 300 years. Yankee states? Sorry about that.

5. Natural Gas - again we have all we need and it's too bad about

those Northern States. John Kerry will have to figure out a way to

6. Computer Industry - we currently lead the nation in producing

goes on and on.

7. Medical Care - We have the largest research centers for cancer

research, the best burn centers and the top trauma units in the world,

as well as other large health centers. Dallas has some of the best

hospitals in the United States .

8. We have enough colleges to keep us going: University of Texas ,

grows better in the South anyway.

9. We have a ready supply of workers. We could just open the border

when we need some more.

10. We have essential control of the paper industry, plastics, insurance, etc.

11. In case of a foreign invasion, we have the Texas National Guard

and the Texas Air National Guard. We don't have an Army, but since

everybody down here has at least six rifles and a pile of ammo, we can

raise an Army in 24 hours if we need one. If the situation really

gets bad, we can always call the Department of Public Safety and ask

them to send over Chuck Norris and a couple of Texas Rangers.

12. We are totally self-sufficient in beef, poultry, hogs, and several

types of grain, fruit and vegetables, and let's not forget seafood

from the Gulf. Also, everybody down here knows how to cook them so

that they taste good. Don't need any food.

Texas in good shape. There isn't a thing out there that we need and

Now to the rest of the United States under President Obama:

Since you won't have the refineries to get gas for your cars, only

President Obama will be able to drive around in his big 9 mpg SUV.

The rest of the United States will have to walk or ride bikes.

You won't have any natural gas to heat your homes, but since Mr. Obama

has predicted global warming, you will not need the gas as long as you

Signed, The People of Texas

P.S. This is not a threatening letter - just a note to give you

something to think about!

SLEEP WELL TONIGHT THE EYES OF TEXAS ARE UPON YOU!!

One Nation Under God

Well, as long as they have "essential control" over plastics and insurance, "etc.", then really there's no reason to stay in this filthy banana republic.