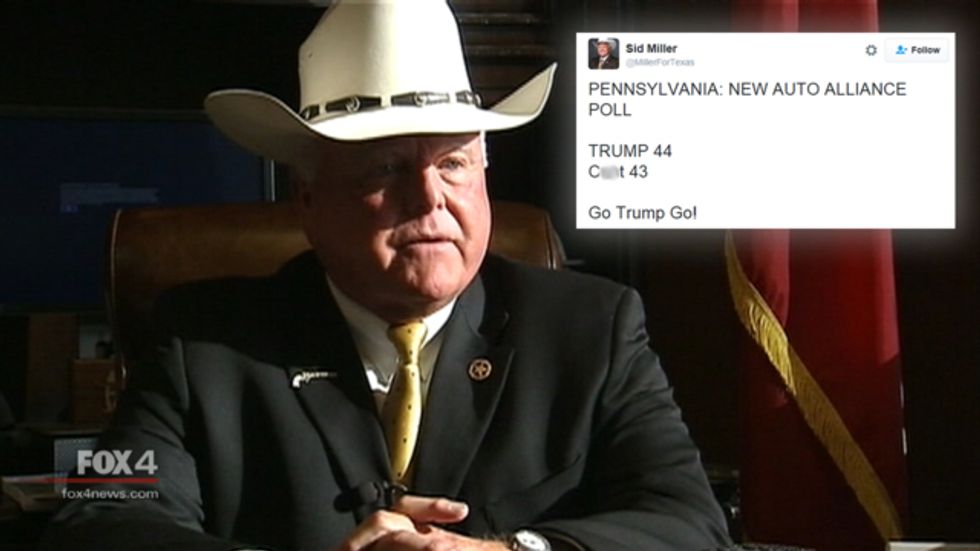 You see that tweet up there where it looks an awful lot like Sid Miller, Texas's Agriculture Commissioner, called Hillary Clinton a rhymes with runt? Commissioner Miller, who occupies one of those seemingly minor offices that's allegedly a first step toward higher office (at least it worked for Rick Perry), strongly denies he ever meant to send out such a scandalous thing in his Twitter account. First he said the account was "hacked," and then blamed a staffer for "retweeting" the message. Now, since it's not a forwarded version of someone else's message, it seems at least somewhat credible that Miller didn't send it himself, since he clearly has no freaking idea what a retweet is. That, or he's really bad at making excuses. Maybe both!

A spokesperson for the agency, Mark Loeffler, told the Dallas Morning News the account had been hacked, and tweeted the same. But then that tweet, too, was removed.

As Cuntgate unfolded Tuesday, NBC-DFW reporter Kristen Orsborn had a heck of a time getting a straight answer out of Miller's office:

Miller eventually settled on the "a staffer done it" story when he spoke to the Houston Chronicle:

"We screwed that. We made a mistake," Miller said by phone late Tuesday.

He said his staffer did not read the message closely before posting the tweet. He said his team took it down when they realized what it said. By that time, however, the tweet already had been noted and screen-shot by political reporters who retweeted it across the country.

"It's disrespectful and not something I would want my name attached to. We apologize for that," Miller said.

Miller, a Republican and avid Trump supporter, added the tweet "was not done maliciously" and the staffer "has been dealt with," but declined to go into further detail.

Texas Gov. Greg Abbott* was appropriately outraged, yes, outraged!! He called it "reprehensible" and "an embarrassment" to the Great State of Texas, and even issued a statement averring that "No true Texas gentleman would ever talk this way," which informed sources tell Yr Wonkette provoked audible guffaws and an exclamation of "Oh, horseshit!" from the ashes of the late Molly Ivins.

This is hardly the first time Mr. Miller's Tweeter account has gotten him in trouble; in August 2015, the Agriculture Commissioner posted a hilarious meme to Facebook to mark the anniversary of the atomic bombings of Hiroshima and Nagasaki:

That post was also deleted, although at least Miller didn't try to put out a lame "account hacked" narrative. Don't you people get it? He's just a good ol' boy who's not afraid to be politically incorrect. Or the sort of fellow who in a more gentlemanly age would only have told his stupid racist, sexist jokes to good ol' boy reporters who shared his sense of humor, and who would have described him as "colorful." Sadly, in today's degraded world, people are so touchy they think he's just an asshole.

* Update: Originally misnamed Texas governor "Jim Abbott." Must have had baseball on my mind for some reason. Wonkette regrets the unforced error.