Texas and Virginia Lawmakers Will Defeat The Homosexuals This Time, Goldurnit! 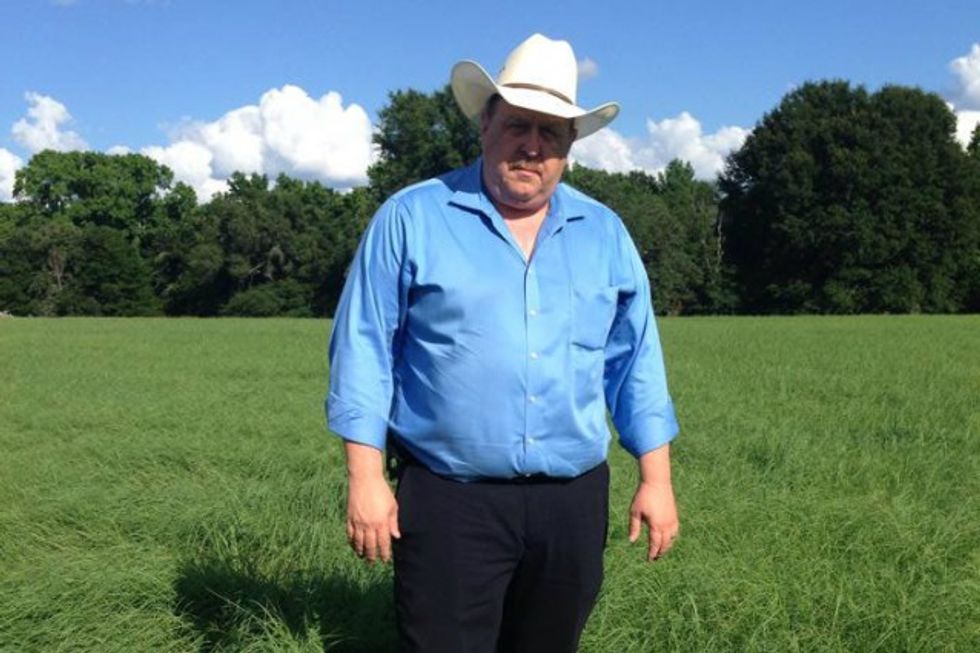 Here is your new Texas freedom-fighter for poor, oppressed heterosexual straight-married bigots. His name is Cecil Bell, Jr., and he is your new frand.

Hello, Texas Bumpkin Daddy, who still manages to look more intelligent than Louie Gohmert, what is your plan to defeat the Lone Star Homosexualistas? It is this:

State Rep. Cecil Bell Jr. (R) has introduced HB 623, the “Texas Preservation of Sovereignty and Marriage Act.” It would prohibit the use of taxpayer funds (including governmental salaries) for the licensing of same-sex marriage, and any employee who violates this restriction would no longer be allowed to collect “a salary, pension, or other employee benefit.”

The bill also prohibits public funding to “enforce a court order” requiring the issuance of a same-sex marriage license. In other words, if a federal court ruled that it was unconstitutional to deny same-sex couples marriage licenses, this law would still prohibit the only people empowered to issue those licenses from doing so.

Bell included in his bill a provision attempting to immunize the would-be law from any legal action in state court, guaranteeing, "A court of this State shall dismiss a legal action challenging a provision of this section and shall award costs and attorney’s fees to a person or entity named as a defendant in the legal action.” Of course, it could then be challenged in federal court, where it would likely be overturned.

Oh, there you go, that will work, well done, boy genius! If the goldarn fedrul gummit (pew pew pew!)* says we gotta change our laws so some ho-mo-Tex-i-can can marry some big city feller name-a Brandon or Derek, not on my watch boy howdy! I'll make sure I ruint the career and livelihood of any employee who thinks the gummit of the US and A is higher than the laws of Texas and Cecil Bell, Jr.! And oh, now yew gon take me to court? Tricked ya 'gin, ya wiseass libtard. My bill gets rid-a courts altogether! Can't sue, can't do 'nothin! I'm Cecil. Cecil Bell, Jr. But my momma calls me "Tiny." You can call me that if you like. "Texas Justice" will be back after these messages!

Not to be outdone by old Cecil, Virginia Delegate Bob Marshall has his OWN plan, in the great state of Virginia, which was forced to go gay for gay marrying last year. Most of the laws being pushed lately by anti-gay conservatives have focused on things actually related to gays marrying each other, because they're already having a really hard time not looking like stone cold Jim Crow Bigots on this issue (and others, so many others, all the other issues). So they're like "Charlene and Pat can do whatever they want, as long as I don't have to see it, and I'm definitely not making a boobie cake for their so-called wedding, because I will have to answer to God about that one day, because my God is very concerned about wedding decorations!" But mostly they've stayed away from trying to make laws that literally have no tangible connection to their sad, pathetic bigotry.

But not Bob! He's on it. Bob has A Idiot Idea for a new state law that goes much, much further:

Marshall’s measure would attach a “conscience clause” to any “license, registration, or certificate” obtained from the commonwealth, whether by a private business or a government agency. This clause would allow all workers to refuse to “perform, assist, consent to, or participate in any action” that would “violate the religious or moral conviction of such person with respect to same-sex ‘marriage’ or homosexual behavior.” (Emphasis mine — though the scare quotes around “marriage” are in the bill.) In other words, workers in the state of Virginia need only declare that interacting with people who partake in “homosexual behavior” violates their “moral conviction” — and they will be free to turn them away.

Because the bill applies to both private and public enterprises, and because these enterprises almost always need some kind of “license, registration, or certificate” from the government, its reach is essentially endless. University professors could refuse to teach gay students; doctors in state-run hospitals could refuse to treat gay patients. Hotels, restaurants, movie theaters, and bars could simply put up a sign reading “No gays allowed.” Police officers and ambulance drivers could refuse to aid not just gay couples, but also gay individuals. County clerks and DMVs could turn away gays at the door. Public school teachers could kick out gay students. Daycares could refuse to look after the children of gay couples.

"Why wouldn't you drive that patient to the hospital, anti-gay ambulance driver?"

"Well, you see, he was watching Project Runway, and I have a moral conviction against THAT sort of behavior."

"Oh, jolly well, then. Thank Republican Jesus Bob Marshall made that law, so that we don't have to live as functioning adults in civilized society! What a relief!"

If the name "Bob Marshall" sounds familiar to Wonket readers, it should, because this is the same champ who believes that God punishes women who have abortions by giving them disabled children, thinks that SCOTUS Justice Anthony Kennedy must be a gay homosexual, and killed a judge's nomination due to the fact that the nominee was a homosexer. Slate points out that that judge has now been appointed, so neener. So this shitmuffin has been muffining shit as long as shits have been muffinable.

Also, your Editrix reports that she might be distantly related to him -- if he, like she, is a descendant of Chief Justice John Marshall or any of his siblings -- and therefore Bob Marshall is probably cousin to a communist.

While we're wrapping up, these folks really don't like it when we point out the obvious connections between these proposals and whites-only lunch counters and separate drinking fountains. It's weird, because it was their damn daddies and grandpas who fought for those laws. (Don't ever let a fundamentalist Christian tell you their movement was not directly born out of the segregationist movement. It was.)

*Men like Cecil shoot their guns in their air, or their fingers if they can't get down in their waistbands that fast, just like that when they say "goldarn fedrul gummit." Texas Fact.