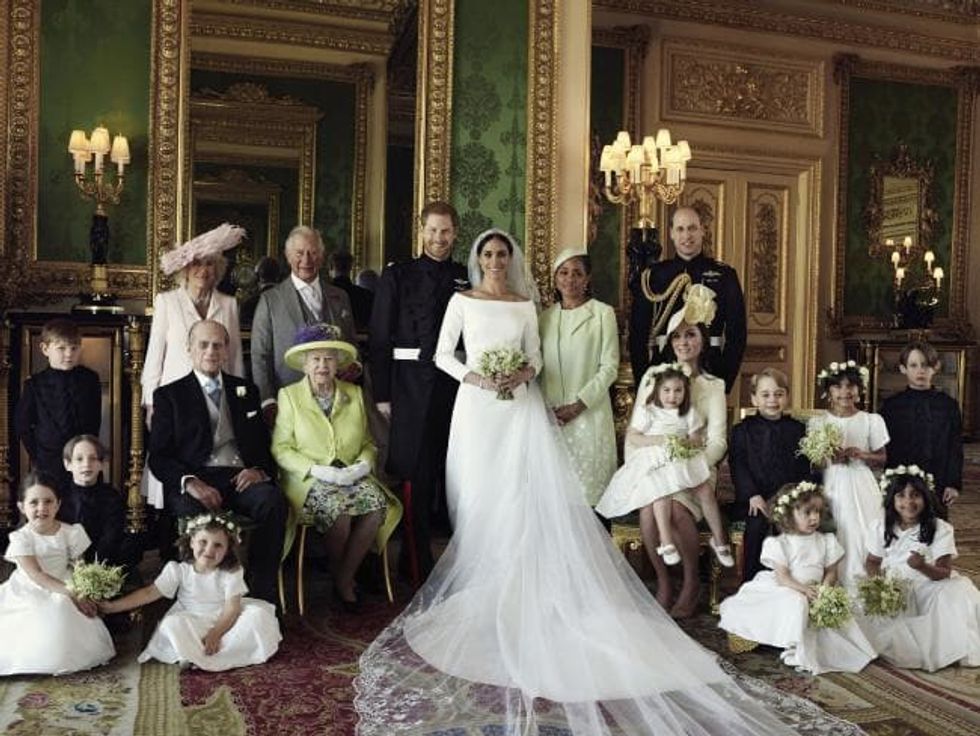 Queen Elizabeth's Nazi-tolerant Uncle would have some quibbles with this photo.

I'm usually resistant to the notion that we live in a post-racial world. After Obama's history-making election in 2008, we all joined hands and offered the world a trademarked beverage, but somehow still wound up with this asshat as the next president. What was in that drink? And although black folks are still being arrested for using the bathroom, it all feels like the last gasps of the not-so-master-race when Queen Frickin' Elizabeth (the one in England ... who lives in Buckingham Palace) now has black in-laws.

Black relatives of the Royal Family would previously be some heavily guarded secret that's shockingly discovered in the climax of a suspense thriller or even a Sherlock from a couple years ago. Now, Meghan Markle, a verifiable black woman, is the "Duchess of Sussex" -- an incredibly white title that in America is usually only adopted by drunk sorority girls or drag queens -- and her likely also black child with Prince Harry will be 7th in line to the crown. And let's recall the last redheaded black person to make a significant mark on the world:

Such a blow to the traditional social fabric has already caused racist idiots like Katie Hopkins to start aging rapidly as if they'd taken their afternoon tea from the wrong Holy Grail.

Twitter minions. I do not give offence. You choose to take it. You need to make better choices. You may stand. #RoyalWedddingpic.twitter.com/oex0EQCOFv

Now, like The Beatles, this post-racial invasion has landed on the shores of the former colonies and already claimed a victim in its wake. Last night, bigot and fake mustache model Vickers Cunningham narrowly lost his bid for Dallas County commissioner.

Cunningham, who served as a criminal court judge, drew national attention after his estranged brother came forward with allegations that Cunningham was racist and homophobic, and regularly used the N-word.

In an interview with the Dallas Morning News, Cunningham said that he was not a racist, but acknowledged setting up a trust for his children that promised them a provision if they married someone white.

"I strongly support traditional family values, that if you marry a person of the opposite sex, that’s Caucasian, that’s Christian, they will get a distribution,” he said.

I confess some amusement that Cunningham actually had a crazy Flowers in the Attic-style will drawn up. If you haven't read the classic V.C. Andrews novel, which wouldn't surprise me given the current state of our public schools, the gist is this: The wealthy family patriarch has a grudge against his daughter because she married his brother and although the resulting kids don't have any obvious cloven-hoof deformities, the grandfather thinks it might be best to lock them up in the attic and slowly poison them. His daughter agrees because she's evil and has no non-rich-girl-skills so doesn't want to get written out of her father's will, which in a surprise twist requires that she can't have kids ever -- even after her current incestuous ones are gone. I found it hard to believe it was legal to be so petty and twisted, but I was later advised that this is 80% of family law.

Anyway, now Cunningham doesn't just look petty, he looks ridiculous. And it's not just the mustache.

Who can claim interracial marriage isn't a "traditional family value" when Queen Elizabeth's grandson just married a black woman? Queen Elizabeth is head of the Church of England -- God is probably on her darts team. Nothing says "chillax on the race-mixing phobia" more than this. Mike Pence is probably sweating because one of William's or Harry's future kids will probably be gay and then that'll be that. Who's gonna refuse to make a cake for the gay prince?

Oh, Cunningham's 25-vote defeat is close enough to trigger a recount if he wishes, but I think he'll have trouble making all those black votes against him count as just 3/5ths of one. Enjoy the cramped confines of the post-racial bigot attic.

Isn't the world a lovely place? Give us money.