Texas GOP Tired Of Getting Arrested For Taking Guns To Airports, Has New Law To Make It OK 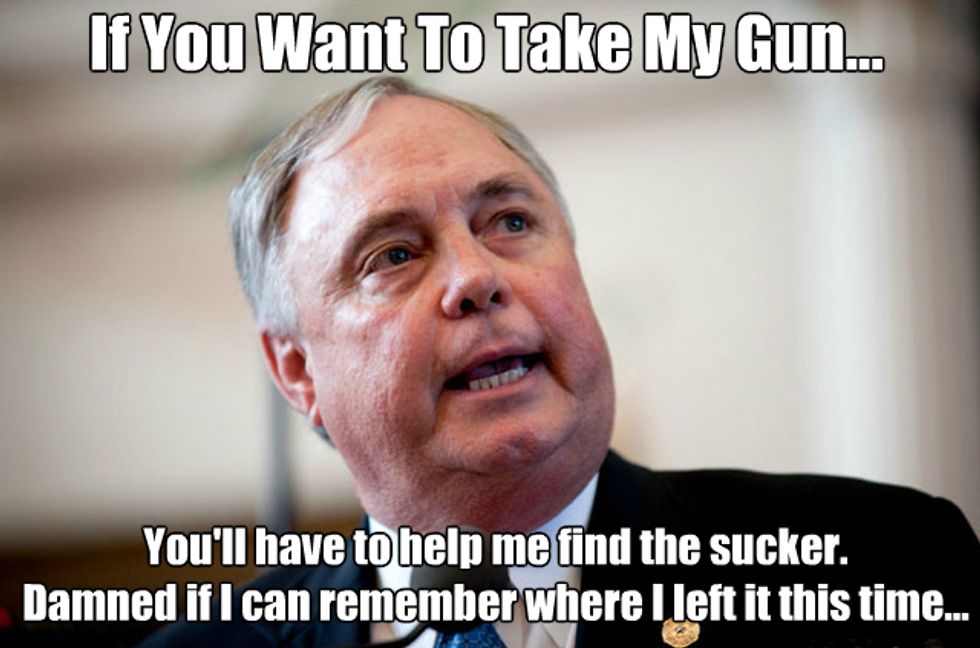 Texans sure love guns! And every Texan knows that in this bad old world, the only way to be safe from crimers and killers and haters and Federal Jackboots is to pack heat at all times. But this causes the occasional faux pas when you accidentally leave one of your many, many guns in your carryon bag as you head to the airport, and then the TSA arrests you as if you were trying to take a gun on a plane like some common Cuban. Thankfully, due to the selfless patriotism and compassion of gun-humpers in the state legislature, this tyranny may soon end. On Thursday, the Texas House passed a bill that would protect concealed carry permit-holders from being arrested when caught with guns at airport security, just as long as they leave the security area immediately.

The bill was introduced by Republican state Rep. Drew Springer, and cosponsored by state Rep. Drew Darby, who knows a thing or two about how easy it is to make a teensy little mistake at the airport, seeing as how he was arrested and charged with a felony in 2013 when TSA agents at Austin's airport found a loaded pistol in his carry-on luggage. Durned if he knew how the little rascal got in there -- it wasn't one of his main guns, we reckon, just one of his extra, backup, stocking-stuffer guns, so he'd forgotten it was there. And by golly, no law-abiding citizen who loves America and the Second Amendment should ever have to be treated like a criminal just because they accidentally didn't abide by the law, which is no doubt why Darby cosponsored HB 554, to make airport security a lot friendlier to absent-minded gun owners.

After all, this sort of thing happens all the time -- especially in Texas. CBS DFW notes that

Texas leads the U.S. in gun confiscations in airport security checks. These confiscations spiked 25 percent last year; the Transportation Safety Administration confiscated 2,212 guns at airports in 2014, including 350-plus in Texas.

Just think of all the Responsible Gun Owners this is going to help! Like Shemane Nugent, Ted Nugent's wife, who was arrested in 2013 at DFW International just for forgetting about a little gun in her carryon, one you could probably only shoot five or six people with. Or maybe WorldNet Daily publisher and hyperventilating conspiracy loon Joseph Farrah, who had the same thing happen to him, only it happened at Dulles in Washington DC, so he'd have to come to Texas to get the full benefit of his Second Amendment brain farts.

Even if the Senate passes the bill and Gov. Greg Abbott signs it -- and god knows they prolly will, it being another expansion of the sacred right to be an idiot with a gun in Texas -- the Austin Fox affiliate notes that the bill would only affect state law, not federal regulations. People caught with guns at airport checkpoints would still be subject to a federal civil penalty, with fines averaging around $3000. Then again, armed Texans, knowing that they now have the right to just walk away, may feel very oppressed by federal TSA agents trying to fine them, so who knows -- maybe they'll feel the need to stand their ground, especially if they have a deeply held belief that the TSA may cart them away to a Walmart FEMA Camp.

We would suggest Texas gun laws have reached Peak Stupid with this measure, but, no, that would just be tempting fate. Also, too, we really wish we could call Molly Ivins back to active duty -- she'd be having a field day with all this stuff.