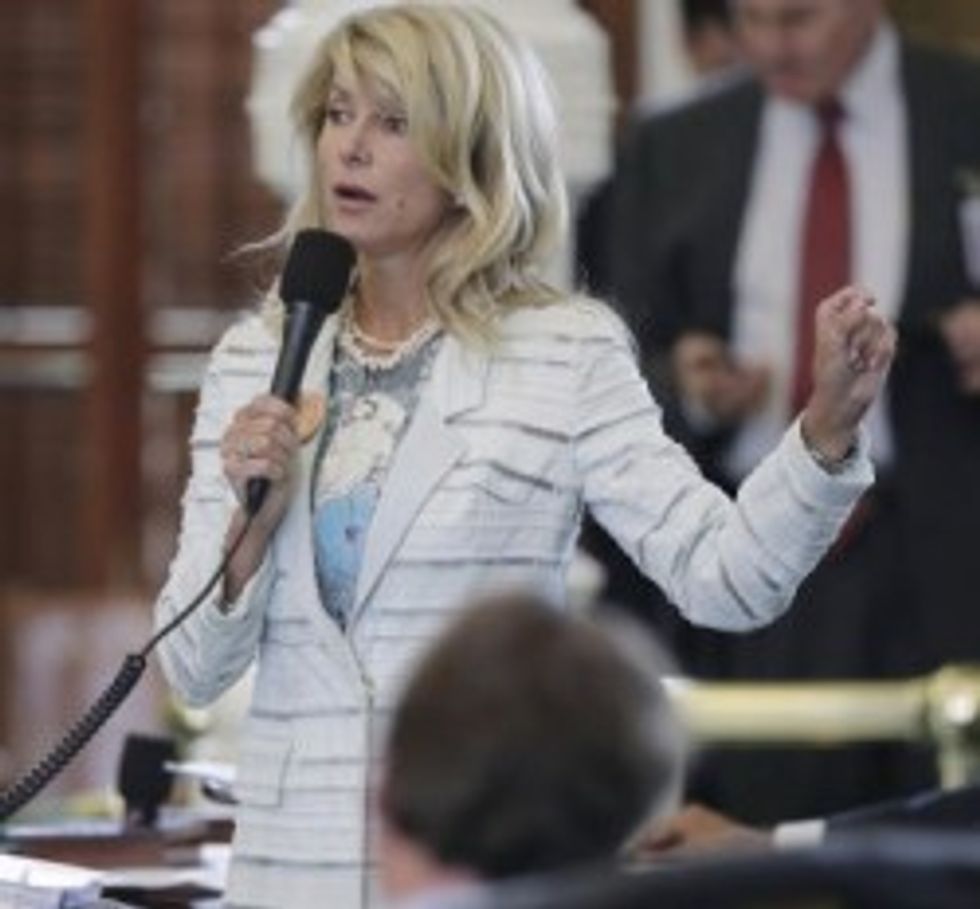 Were you unable to sleep last night because of the sound of women screaming WHAT THE FUCKING FUCK?!?!? coming out of the Texas state capitol?

It all started when state Sen. Wendy Davis, Wonkette's unanimous frontrunner for the Legislative Badass of the Year Award, stood on her feet all goddamned day to explain, in little itty bitty words that even Texas Republicans should be able to understand, why Senate Bill 5 -- which bans abortion after 20 weeks, requires clinics to be certified as "ambulatory surgical centers," and a bunch of other steaming donkeyshit -- is wrong and stupid and unconstitutional and also wrong and stupid (and unconstitutional). As Yr Wonkette already 'splained at you, all but five of Texas’s 47 existing clinics would have to close under this new bill.

But then? Oh, there were shenanigans!

As you might imagine, the menfolk of the Texas Senate did not appreciate having to listen to some lady running her mouth off 'bout ladyparts, as, clearly, that's none of her business. State Sen. Bob Deuell, who is A Doctor and also A Idiot, even mansplained that none of this is even relevant because -- we shit you not -- pregnancy only results from "accurate intercourse." Yeah. We can't believe that shit either. Except that considering today's Republican Party, we totally can.

But Wendy Davis, who is a superbad badass, just kept yammerin' and yammerin' and was all, like, "No, I will NOT yield." Which is when the menfolk did some outside-the-box thinking (yes, we use that "thinking" word loosely) and decided they'd found a way to shut that whole thing down.

WHAT?!? you say. They just, like, made her stop talking? Why yes they did. Because she dared to discuss other Texas restrictions on abortion, and the menfolk kept saying that discussing abortion restrictions was not "germane" to the discussion of abortion restrictions, and some RIDICULOSE Texas procedural rule says that if the men whine three times and click their heels, they can end a filibuster.

In case you were watching the clock, yes, that was the exact moment that ALL HELL BROKE LOOSE. The audience -- and vaginas all across the land -- started shouting "BULLSHIT!" so the Texas menfolk had the audience escorted and locked out of the room because lalalalalala, we can't hear you! Shut up, men are talking!

Finally, after they'd consulted themselves and their manual enough to convince themselves that yes, they were quite certain they did not want to hear any more from the little woman, they decided it was time to vote on their heinous bill. And that's when the dogs of war were REALLY slipped and the crowd went wild. No, seriously, it went motherfucking wild. There was screaming and shouting, even as the very gifted state Sen. Robert Lloyd Duncan begged the crowd to please stop shouting at him and said, "If I can have some order," to which the crowd basically shouted FUCK YOU AND YOUR ORDER! And when he tried to announce a vote tally -- surprise! The menfolk got their way, according to his calculation! -- the crowd erupted into chants of "SHAME! SHAME! SHAME!" and some more general shouting and outrage, while the GOP frantically looked for a parliamentary loophole so they could fool the crowd into leaving, then vote with no one in the chamber.

While the bill did not actually pass by the midnight deadline, the GOP decided it was just a heckuva lot easier to say it did. Congratulations, womens of Texas! You are cordially invited to go intercourse yourselves accurately.

Except wait! After a couple more hours of private conversation in quiet rooms, the GOP decided that maybe stealing a vote right in front of the whole world was not such a good idea, and that it was finally and bitterly willing to admit the official vote was recorded at 12:03 (that's after midnight, for you clock-challenged Republicans out there). So SB5 is, it turns out, dead as fried chicken. Awww yeah.

After watching that travesty of a mockery of a sham, even with happy ending, we are tired. Our vaginas are tired. Not Wendy Davis tired, of course, but we are not the badass she is. But we are in need of all the drinks, so send us your monies. For the ladies. For vaginas. For 'Merica.