Texas Universities Brace For Concealed Guns, Students To Get Automatic A+++

[contextly_sidebar id="FXh390XSfCii0ugGmg9VCjwX3xpn7uzP"]With Texas's super-smart law allowing concealed carry on campuses going into effect Aug. 1, Texas university faculty are getting ready to adjust to the knowledge that some of their students may be packing heat. A recent faculty forum even included a suggestion that instructors may want to modify classes to avoid touchy topics, lest heated student discussions escalate into gunplay. At the University of Houston meeting about preparing for the implementation of the new law, a slide suggested instructors may want to remember that they'll soon be in an armed society, so they'd goddamn well better be polite if they value their lives: 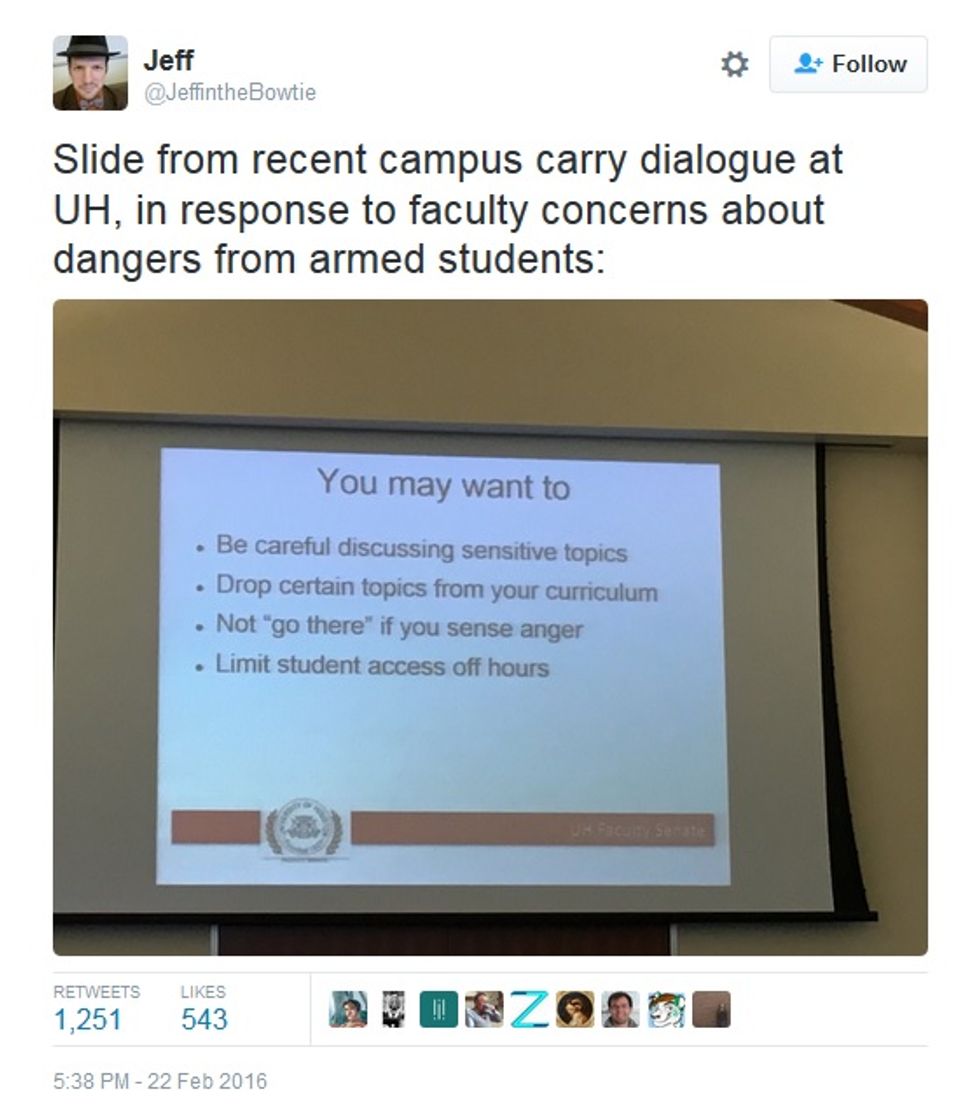 The second amendment protects all the others, and don't you forget it!

Academic freedom's just another word for nothing left to lose, right?

For some silly reason, the nervous nellies teaching in Texas universities worry armed students may pose some sort of danger, when everyone knows concealed weapons are only used for self-defense against terrorists, home invaders, drug cartels, carjackers, and knockout gamers. Stupid liberals have no idea how safe they'll be, and won't even appreciate what a huge favor their gun-toting students are doing for them. Of course, that's partly because the law forbids professors from asking students whether they're carrying, at the risk of a $10,000 fine against the school. Gotta keep the element of surprise, you know, and prevent the liberal pantywaists from discriminating against students who Love America.

Schools have some latitude in deciding where firearms will be permitted on campus. The University of Texas at Austin, for instance, plans to allow concealed weapons in classrooms but not in dorms; the campus's rules also specify that armed students and others must keep their guns fully concealed “on or about their person” -- not, say, in a backpack -- or that weapons be locked inside a car. Guns must also be kept in a holster that protects the trigger, and semiautomatic pistols can't have a round chambered. Not surprisingly, several pro-gun student groups are already planning lawsuits against these oppressive restrictions, because what part of "shall not be infringed" don't you have printed on a bumper sticker?

The new law applies only to public universities and community colleges; astonishingly, no private Texas universities have opted to allow campus carry. Perhaps this is because Southern Methodist University, Baylor, and Texas Christian University all hate freedom. And despite the threat of fines, at least one professor, Nobel physics laureate Steven Weinberg at UT-Austin, has announced he will not allow firearms in his classroom. Yr Wonkette has not yet heard back on when the good people of Texas plan to lynch Professor Weinberg.

Also, with the same sort of perfect symmetry -- pure cosmic coincidence, of course -- that led the National Rifle Association to hold its annual convention in Denver eleven days after the Columbine massacre, the new campus carry law happens to go into effect on the 50th anniversary of Charles Whitman's August 1, 1966 rampage in which he shot 43 people from the University of Texas clock tower, killing 13.

We'd like to encourage all English teachers around the nation who have a class that day to spend a few minutes on the topic of "irony."

Protip: If you're paywalled out of the Houston Chronicle article, simply google the headline "UH faculty suggest steering clear of some topics if students armed"

Trump Lawyers: Congress Can't Not Go To Court To Decide Subpoenas Court Has No Say Over!