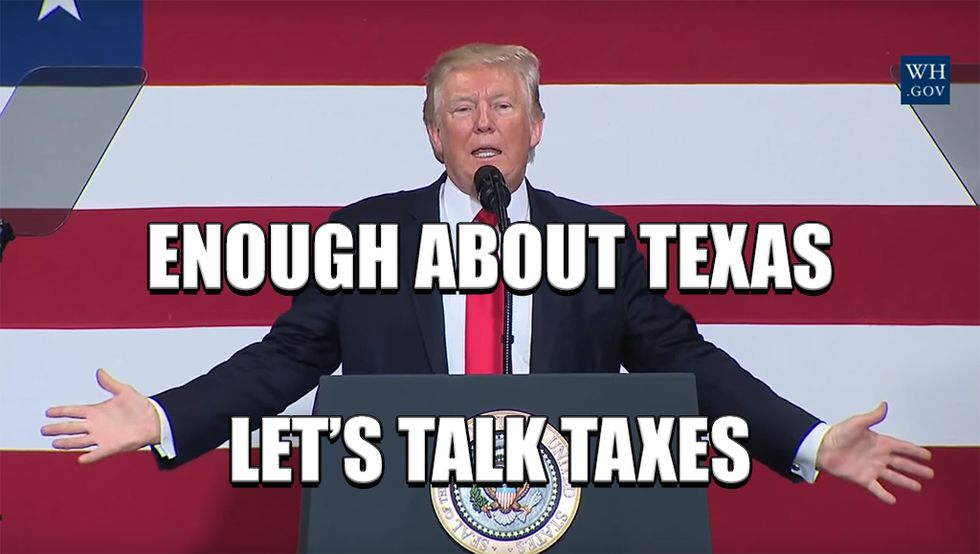 An explosion at a Texas chemical plant last night isn't exactly making the lives of Texans any easier as millions of pounds of pollutants from oil and other industries leak out. Good thing we have a federal agency to protect the environment...

As the flood waters recede in areas ravaged by Harvey, people will have to wade through the bureaucratic muck of the Office of Disaster Assistance, and the person at the tippy top of is Linda McMahon. Her experience running a testosterone-driven male soap opera should serve us well.

Texas politicos are pressing for immediate federal aid, and with projections in the hundreds of billions of Ameros, many Republicans would really appreciate if you didn't look at their voting records for Hurricane Sandy relief.

Robert Mueller and his justice league of extraordinary investigators have teamed up with New York Attorney General Eric Schneiderman to investigate Paul Manafort's shady Not American blood money, suggesting that Mueller gives absolutely zero fucks about Trump's pardon powers. What is this, a crossover episode?

As Mueller's team follows the trail of Trump's Russian blood money all over the world, it seems that some people may not have been completely honest about how they helped to build Trump trash palaces in Not America.

The Senate Intel Committee wants to talk to Michael Cohen about Trump's failed Moscow tower -- which he swears was totally legal, even if he had nothing to do with it, regardless of what the emails say.

Yesterday, Trump touted his tax plan to give corporations more money, but he still won't tell anyone how he's going to do it. Maybe he'll give all us poors a magic money tree?

California Democratic Senator Kamala Harris will co-sponsor Sen. Bernie Sanders "Medicare for All" bill. At a town hall last night Harris told her constituents, "it's the right thing to do." Well, YEAH.

Trump's White House wants to fund public infrastructure projects with private capital, that way you can't hold anyone accountable if your local Halliburton Water Way and Tunnel (brought to you by Carl's Jr) collapses due to cut corners.

The hard-on for grifty for-profit universities in the Trump administration is being challenged by multiple Democratic state officials who think morans should get brain smarts gooder for all that school money.

The Pentagon is fessing up that there are several thousand more boots on the ground in Afghanistan now that it's been caught fudging the facts. Defense Secretary Mattis called it a "very strange accounting procedure." Indeed.

When Trump went to Missouri to scream at people yesterday he attacked Senator Claire McCaskill, and now people are wondering if that attack was a violation of the Hatch Act, or just another violent brain fart.

A new Fox News poll says 56% of Americans think Trump is tearing America up, with 96% of Democrats of the opinion that Trump is dividing the country. YOU'RE TEARING US APART!

A federal judge in Texas has temporarily blocked the state's sanctuary city ban while a suit alleging racism moves forward. The judge stated that that the state can't discriminate against people just because they don't speak American.

Laura Ingraham and LifeZette are crashing and burning amid allegations that it's stiffing its writers/staffers, and sexually harassing women. This would funny if it wasn't screwing people out of fair wages and working conditions.

Tomi Lahren is back on teevee doing her whole "White Power Barbie" thing as an officially official Fox News contributor, and Hannity can hardly hide his boner.

History Nice Time! During the 1964 Freedom Summer, three civil rights activists were killed by the KKK, and Dick Gregory had to pressure the FBI into investigating the case by using lots of Hugh Hefner's boobie money. Blessings on your memory, Dick Gregory!