That Eric Trump Boy Just Ain't All That Bright 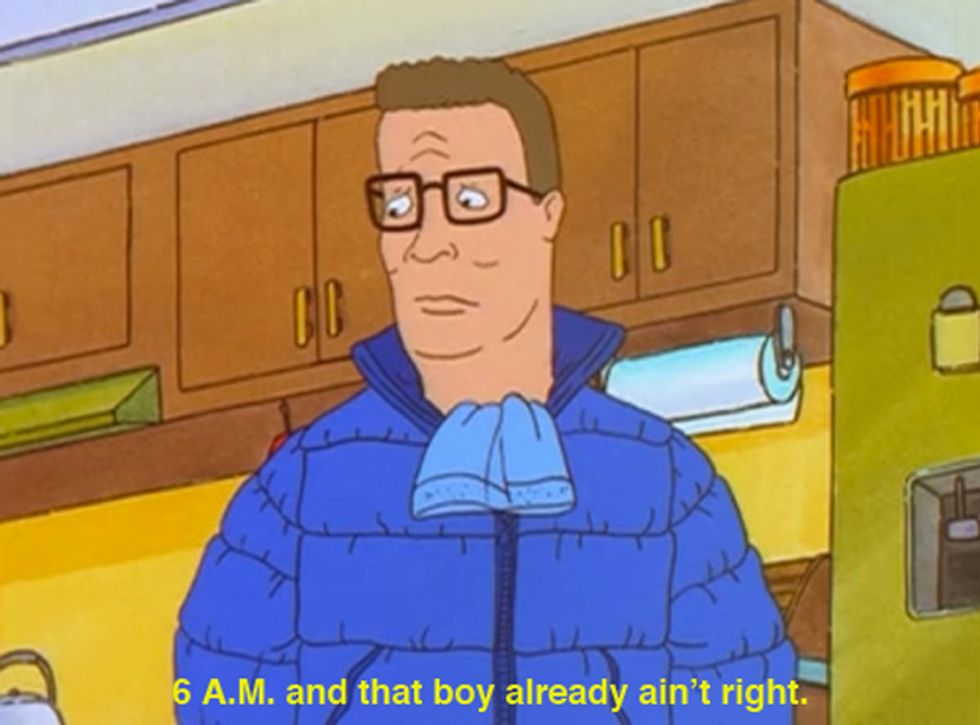 The Donald Trump campaign is very busily denying that the Republican nominee is in any way reconsidering his views on immigration, thanks to a Buzzfeed article over the weekend in which several of Trump's Latino advisory group said they thought he might be open to something other than deporting all 11 million people in the USA without proper documentation. It's a pretty interesting spin fest, with all the usual hallmarks of an impending change in Trump "policy" -- which is never really policy anyway, just whatever squirrels are running around inside his head at any given moment. Trump scheduled and then cancelled a major policy teleprompter speech for Thursday on immigration, which means we'll have to wait a while for him to deny he ever said he was going to deport everyone anyway, then offer a half-dozen other self-contradictory ideas on immigration which magically neither include a plan for deporting people nor any acknowledgment that he's changed his mind. Fortunately, that's not really what we're looking at in this article anyway. No, what we're looking at is one beautifully stupid thing Eric Trump saidabout his father's immigration policy, whatever it may be, and why immigrants are very very bad.

Here's Eric Trump 'splaining to "The Fox And the Friends" Monday how his dad has the greatest, wisest immigration plan that he can't tell you yet, but is just absolutely needed to solve our huge immigration problem:

But you know, my father’s immigration plan is pretty simple. He wants secure borders. You have to know who’s coming into the United States of America. You can't let people come in unchecked. We have 100 million people in this country that are out of the workforce. Right? I mean we have manufacturing jobs in this country have gone down one-third since 2000. We're losing jobs across the board, yet people are walking in unchecked and we don't know who they are. And they could be ISIS."

OK, that's bullshit on the open borders nonsense and the ISIS fearmongering, but we've heard that already. Anything new, Eric?

Trump said his father "wants a safe country, and he also wants Americans to have jobs."

Uh huh. Between 2012 and November 2015, The U.S. admitted a whopping 2,174 Syrian refugees. Truly a flood -- nearly 0.0007% of the American population -- that has kept job growth flat somehow. Now, President Obama did commit last fall to taking in another 10,000 in fiscal year 2016, a goal the government seems likely to meet, so that's an enormous drag on the economy right there, spread out across the entire population of 320 million.

Now, to be fair, Eric Trump did go on to blame Messicans for wrecking wages, too:

It’s because you have, you know, thousands of people coming over the border. I mean, and Americans are suffering because of it and that's his point. So he's speaking to Hispanic and Latino leaders and he’s having really amazing conversations. He’s also speaking to law enforcement, he’s speaking to border patrol. And you know he’s going formulate a really, really great plan that's humane and ethical and that treats everybody well. But we have to solve the problem. It’s a real problem for this country.

GreatwonderfulAMAZING plans. So apparently these "thousands" of illegal immigrants have depressed wages across the economy, a cause which all economic experts named Trump agree on.

Just to double check -- in the most scientific way possible -- we googled "causes of wage stagnation" and searched for "immigration" and "immigrants" in the first few articles that came up. Like we say, sciencey! The Economic Policy Institute mentions "immigrants" exactly once -- not as causes of wage stagnation, but as victims of it, since they may face difficulty "in simply getting paid for the work they do (i.e., the problem of 'wage theft')." The AFL-CIO, which you might think would have a motive to blame immigrants for flat wages, simply cites the EPI's observation about immigrants being hurt by wage theft. Not found in Fortune, the Brookings Institution,Real Clear Markets, or the Pew Research Center. Oh! Oh! But The Cato Institute's David Bier wrote a whole article on whether immigrants are causing flat wages! Let's see what the Libertarian says -- bet he can't STAND those awful immigrants!

In addition to not being the “principal reason” for wage stagnation, immigrants aren’t any reason at all. As I pointed out in a paper last year, both economists who favor more immigration — notably Gianmarco Ottaviano of the London School of Economics and Giovanni Peri of the University of California at Davis — and those who don’t — most notably Harvard’s George Borjas — actually agree that immigration has increased average wages in the United States. The only real debate is over immigration’s short-term effect on wages for high school dropouts. Immigrants aren’t harming the “average family” at all.

So like we were saying, this Eric Trump guy is not very smart, the end.