That Time In 1964 When Dick Gregory, Peace Be Upon Him, Made The FBI Do Its Damn Job 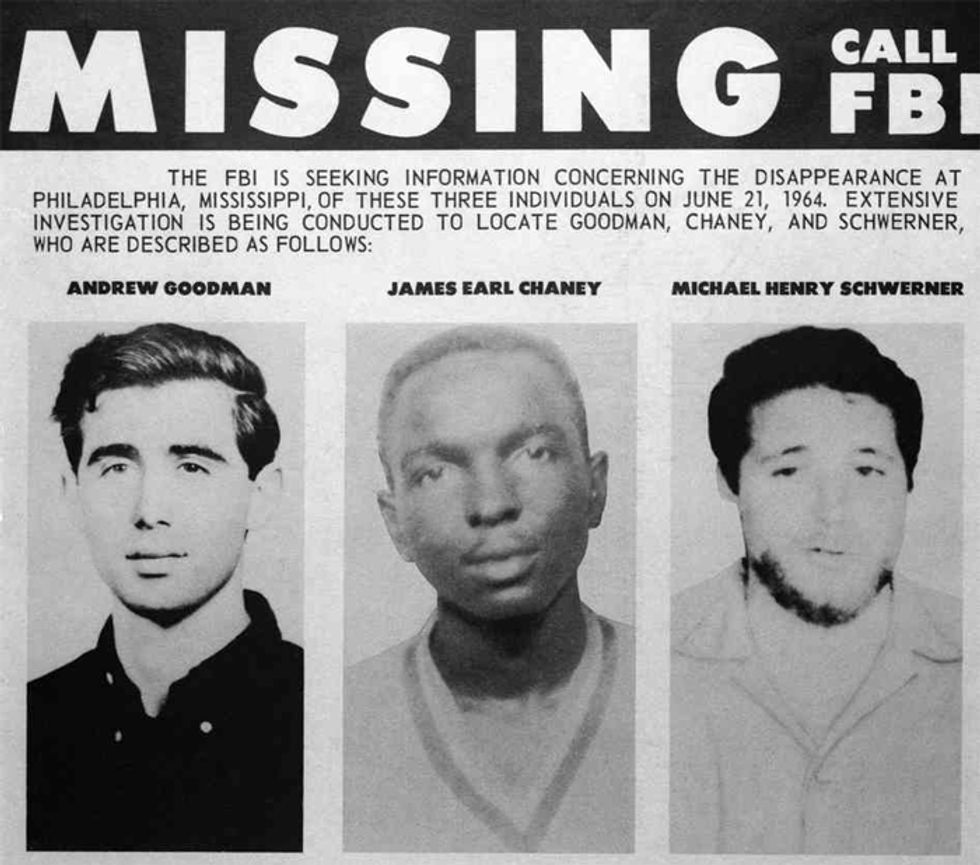 There's a comedian in this story, but it's not funny.

Dick Gregory died August 19. We knew he was a civil rights activist and the first black standup comedian to regularly work "white" clubs, and, much later in life, sort of an oddball natural foods guy and god help us even a 9/11 truther. We had no idea, however, that Dick Gregory may have been the one person who did more than anyone else to push the FBI to find the bodies of James Chaney, Andrew Goodman, and Michael Schwerner, the three civil rights workers who were murdered by the KKK and law enforcement near Philadelphia, Mississippi, in 1964. Until we read this amazing piece at Medium by David Dennis Jr., at least. It's one of those things we want to grab you by your lapels (if any) and insist you go read now. Fine, fine, bookmark it and read it after work, but READ IT.

Mr. Dennis is the son of, logically enough, David Dennis Sr., the Mississippi director of the Congress of Racial Equality, who sent the three young men to investigate the firebombing of a church in Longdale, Mississippi. The senior Dennis had planned to go with the three to Longdale, but his bronchitis was acting up so they told him to go on home to rest up, which is why there is a David Dennis Jr. to write the story at all:

What my father didn’t know at the time, but is sure of to this day, is that the KKK perpetrated the bombing to lure the three workers out and kill them. The Klan also prioritized Mickey Schwerner as a target. The young, fiery organizer was a dynamo at rallying black people to register to vote. Schwerner offended the Klan most of all because he was white. A traitor. And he was Jewish.

The three young men -- all in their 20s -- were pulled over for "speeding" in Philadelphia, taken to jail, and then taken out and murdered by the KKK, including Deputy Sheriff Cecil Ray Price. Chaney, Goodman, and Schwerner had planned regular check-ins with Dennis:

My father awaited phone calls about the workers’ whereabouts as standard procedure any time he dispatched someone for an assignment. As soon as he learned the men hadn’t checked in, he knew they were dead. Everyone did. White and black.

That part of the story, and the 44 days the three were missing before their bodies and their burned-out station wagon were dug out of a dam on the property of one of the Klansmen, are familiar to anyone who knows their Civil Rights history. David Dennis Jr. tells us how Dick Gregory made sure the bodies were finally found. It's a disturbing story of how things worked back then, when black lives didn't matter a bit. A simple fact of life in 1964: The search for the three missing men was complicated by the fact that searchers kept finding lots of other bodies of lynching victims that nobody had ever looked for.

Dick Gregory's role was as a constant source of pressure on the investigation. He was in Moscow when he heard of the men's disappearance, and immediately flew back to the US, to Jackson, Mississippi.

Once there, he immediately met with James Farmer, the head of CORE. Gregory, Farmer and a caravan of 16 cars headed to Philadelphia to try to find the men. Gregory, like everyone else, knew those men were dead.

Gregory was able to meet with several city and county officials, including Neshoba County Sheriff Lawrence Rainey, who'd helped lead the conspiracy, and Cecil Ray Price, the deputy sheriff who'd taken part in the killings. He later told an interviewer he thought it was strange they'd let anyone meet with them during an investigation, and that they seemed nervous. The city attorney kept jumping in to answer questions.

Later, Gregory would say that he put his finger in Rainey’s face and said, “You know you did it. And we’re going to get you!” Gregory presented a singular problem for Rainey and his boys: he was a “nigger” they couldn’t make disappear.

Dick Gregory raised money for a reward from Hugh Hefner, and pressured the FBI to push ahead with the investigation. He received an anonymous letter with a tip about where the bodies were buried. Dennis says most civil rights activists believe the FBI knew the bodies' location, but were only moved to excavate the earthen dam because they knew Gregory had the information as well:

The importance of the discovery of those three bodies can’t be overstated as it revealed, once again, the hellish hatred resting in the heart of Mississippi for black people simply trying to get access to vote [...] And the revelation that the men were murdered provided the final straw, creating enough fervor for the 1964 Civil Rights Act to pass Congress.

Look, we told you to go read the whole thing. GO READ THE WHOLE THING. If nothing else, it's an excellent reminder of why people who know anything about history detest the 1988 movie Mississippi Burning, which turned the murders during Freedom Summer into a tale of heroism by white FBI agents.

Since Americans learn the little history we know from movies, maybe we need a good movie about Dick Gregory to set the record straight. We sure hope it gets to the bottom of why Barack Obama was golfing that whole summer.

And more to the point, let's never, ever, let anyone forget that Ronald Reagan knew damn well what he was doing when his first campaign appearance after winning the Republican nomination in 1980 was a "states' rights" speech in Philadelphia, Mississippi, just 16 years after the murders. And here we are, 37 years after that, with people insisting with a straight face that there was no party realignment after the 1960s.

Go! Read! Then get back here and have your Open Thread!

Yr Wonkette is supported by reader donations. Click the "Donate" linky so we can keep Doing History to you.