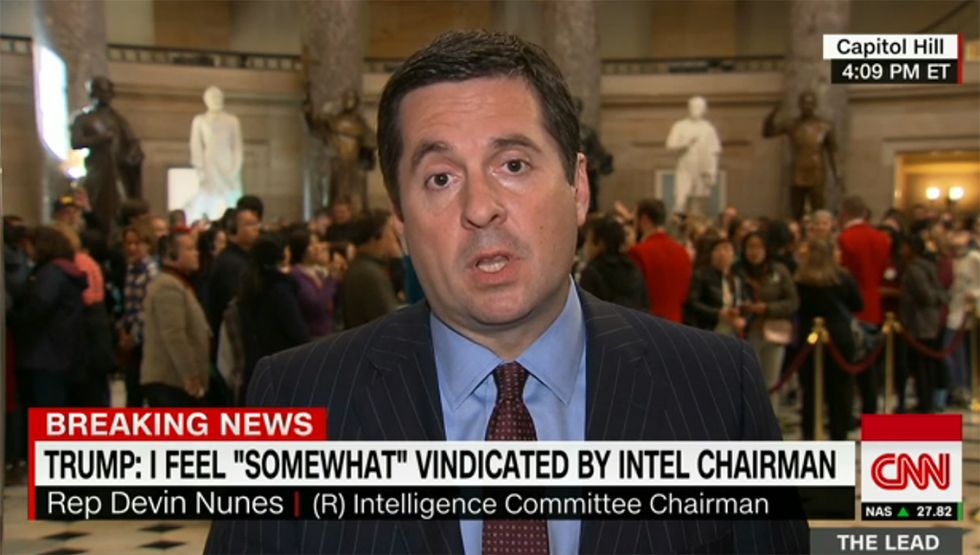 Well, the White House was worried THE DODGY MEMO would be a "dud," and oh boy, those worries were NOT WRONG. Because, um, well ... we've read the whole thing. It took us about 60 seconds, because it's short. Very, very short. And even though we already know that, according to Democratic members of the House Intelligence Committee and the FBI and the Department of Justice, this dumb little document is full of lies, half-truths and Devin Nunes's personal hate fantasies, we were at least hoping there was some allegation in there that was WHOA IF TRUE! Otherwise, what have the House GOP and President Idiot Stupid been creaming their pants about all week?

Because Wonkette believes in transparency in accurately reporting on Devin Nunes's bullshit, here is the WHOLE MEMO, followed by our brief thoughts, which are "That's it?" and "LOLOL Devin, now show us the real memo" and "Aww poor thing, happens to all guys, we swear."

The beginning of the memo says on October 21, 2016, the Justice Department and the FBI applied for a FISA warrant on Carter Page, and it was approved. And every 90 days thereafter, the FISA court agreed that ayup, this guy is a really dumb Russian intelligence asset and we should keep listening to his Snapchats, so the warrant was renewed. James Comey (LEAKER IN CHIEF), Sally Yates (DISRESPECTFUL LADY), Andrew McCabe (HILLARY CLINTON), Rod Rosenstein (BALTIMORE JEW DEMOCRAT) and Dana Boente (CHRISTOPHER WRAY'S NEW FBI GENERAL COUNSEL LOLOL) all signed off on one or more of these requests. Are they all part of the conspiracy? Or were they doing their jobs?

(By the by, NBC's Ken Dilanian just reported on live TV that there were also FOUR SEPARATE FISA JUDGES, who all agreed to the requests. Obviously they are all Hillary Clinton, pretending to be a judge.)

The memo does not say Carter Page was a bad target, or that he shouldn't have been under surveillance, nor does it mention how the FBI knew Page had been recruited by Russian spies in 20-fucking-13.

The memo brings the Steele Dossier and Christopher Steele to center stage, but mentions nothing about any other evidence the FBI had that suggested they should be investigating Page (even though it DOES mention other evidence against the Trump campaign; we will get to that!). But GRRR ARGH, Steele was paid by the Democrats!

The memo does not say any of Steele's information was bad. In fact, it does not say anything about how the FBI was able to corroborate or not corroborate information from the dossier. We've asked it before, and we must ask again: Do Republicans Hate The Trump Pee Hooker Dossier Because It’s TOO TRUE? We really, really think so.

The memo gets real mad about how the DODGY DOSSIER was unfairly used as a source for a Moscow trip Carter Page took in September 2016, and that a Yahoo news article by Michael Isikoff was unfairly used to corroborate that, since Steele LEAKED THAT TO ISIKOFF. This is weird because the trip was completely public at the time, as in, not a secret.

The memo makes hay of how Steele talked to the media at various times in September and October of 2016, and strangely acts as if Steele was an FBI employee bound by the law not to be a BIG LEAKER, instead of an informant who came to the FBI with some information and said "HELLO, YOU FUCKERS, LOOK WHAT I FOUND."

The memo strangely refers to Steele being "terminated" by the FBI after he talked to David Corn of Mother Jones just before the election, which is, again, strange, because Fusion GPS co-founder Glenn Simpson testified that it was Steele who backed away from the FBI after James Comey shoved Hillary Clinton's emails into the campaign 11 DAYS BEFORE THE ELECTION, because he was concerned the bureau was being politicized, in a gross, pro-Trump way.

The memo alleges that, even after Steele stopped talking to the FBI, he kept talking to a guy named Bruce Ohr at Justice, whose wife Nellie works for Fusion GPS. Taken on their own, these allegations mean ... nothing. But if you've ever heard an idiot ass GOP congressman like Jim Jordan clapping his hands and waving while yelling the name "Bruce Ohr," that is why.

The memo alleges that Chris Steele has a bias against Trump, which is utterly shocking, because when a former MI6 spy uncovers an international espionage ring where a candidate's campaign is conspiring with a hostile foreign power to steal American democracy, isn't he supposed to fall madly in love with that candidate?

Finally, the memo confirms that the FBI's Trump-Russia investigation didn't start because of the DODGY DOSSIER, but because of Trump campaign worker George Papadopoulos, who drunk-rubbed himself all over an Australian diplomat and told him about the conspiracies Russia was doing with Trump. So ... uh ... doesn't that kind of negate the ENTIRE FUCKING POINT of this memo, which is that the DODGY DOSSIER was fake news used to start an unfair investigation into Trump?

OH BUT WAIT, THE FBI AGENT WHO STARTED THE TRUMP CASE WAS PETER STRZOK! HE IS THE SEXTER! THE SAME SEXTER WHO ALSO WROTE THE FIRST DRAFT OF THE COMEY HILLARY EMAILS LETTER!

Tricky tricky, how Strzok was investigating both Trump and Hillary, like a common FBI agent who investigates things. #BIASSSSSSSSSS

Also tricky tricky, how the FBI confirmed its last minute re-investigation of Hillary, but leaked to the New York Times some bullshit about how there was no "there" there with Trump and Russia. #BIASSSSSSSSSSS

Also, the memo refers to Lisa Page as Strzok's "mistress," presumably because cooler heads on Devin Nunes's staff amended it from the first copy, which said "SLUT WHORE."

So ... boy howdy ... Devin Nunes sure did outdo himself this time, didn't he? Hoo boy my goodness, this changes everything, just kidding ZZZZZZZZZZZZZZZZZZZZZZZ.