The 2016 Wonkette Winter Wonksicle Tour, By The Numbers 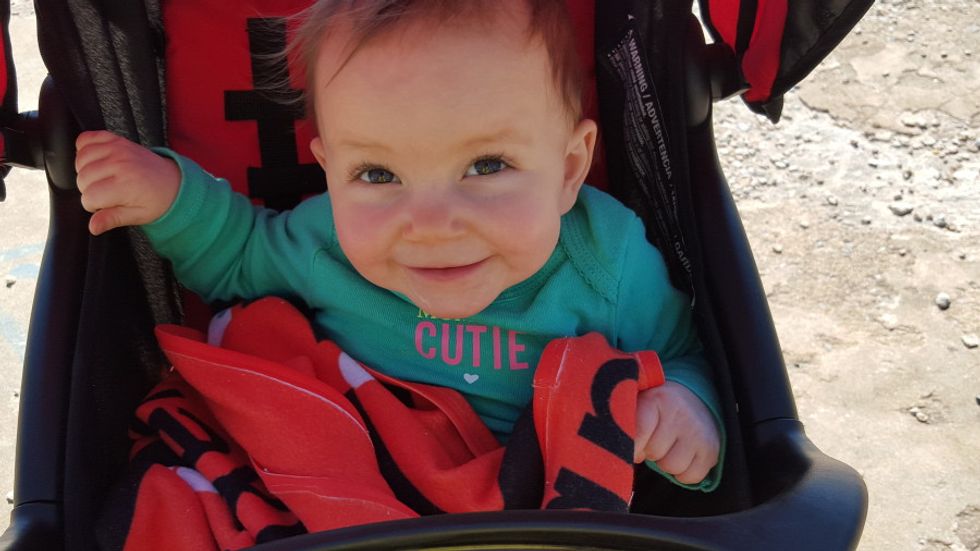 Hi South Dakota! and GOODBYE FOR EVER!

Six weeks, 6,000 miles, and one illegal search and seizure later, the Wonkebago has turned back into our Montana driveway, and we're NEVER EVER EVER LEAVING AGAIN, until July. What's that, you want to give us some money? That is very nice of you! We will let you! Okay!

Times we almost ran out of propane: 4

Nights spent at the side of the road in those highway scoop-outs: 1

Times Donna Rose ate soup for the first time like a sophisticated woman who eats soup: 1

Feed the baby the soups!

Times Donna Rose ate cake for the first time and then was pissed we had never given her any before: 1

Times Donna Rose ate cake and then was pissed when it stopped: 3

Bath and floormats eaten by a dog who heard "a sound": 2

Tribal chairmen who came to our parties: 1

Percent Custer had it coming: 100

this is just really a terrible picture

Presidential candidates sleeping in their trucks in Manchester to whom we offered the Wonkebago couch but they didn’t call till 11:30 p.m. and we were already asleep: 1

Times Shy started to drive off still plugged in: 1

Hours lurking waiting for Morning Joe to see we had a baby for Mika to steal: 4

People who wrote in in disbelief that we let Joe Scarborough touch Donna Rose: 11

Times Mother Jones’s David Corn got on the floor to play with the baby: 1

Times Mother Jones’s David Corn demanded I hand the phone to him so he could talk to my mom: 1

How much my mom liked that: LI’L BIT

Hours of notice we gave Boston as to where their Drinky Thing would be but people showed up anyway: 4

Subway stops Beelzebubba traveled to Astoria to see us: 27

Hours Spurning Beer drove from Pensacola to see us: 6

Number of Mayor Quimbys who have seen us in both Oakland and Atlanta: 1

Chicagoans who asked when we were going to come to Chicago the week after we came to Chicago: 1

Hours elapsed before our Charleston hostess mentioned offhand that she was Vegan and Tiara: 2.5

Birthday celebrated at my mom’s: 43

Blowouts with my mom: 2

Blowouts expected with my mom: 2

Hours my mom sobbed “like an idiot” after we left: 1

That neck brace is not from our fight.

Truckstop CDs Shypixel bought me for my birthday: 4

Wonkers who made us dinner somewhere in America: 2

Husbands who seemed sort of annoyed when we randomly showed up in their driveways but ended up being really nice and very hospitable probably because we are so charming: 3

Times our property management company “had to” come in our house while we were gone: 3

Times we are reupping our lease this July: 0

Months we are going to spend in the Wonkebago after we move out of our house in July: I don’t know, like 5?

Bernie Sanders swag sold since Universal cease and desisted us, in dollars: $6344

Wonkette Bazaar orders waiting for me to get home: 45

Keys broken in frozen lock trying to get the Wonkette Bazaar merch out of the back: 1

Times the graywater tank backed up into the shower: 1

Hours driven to dump station that was frozen solid: 2

Wonkers who brought or baked us pies: 4

American states where marijuana is legal: 3

States Shypixel did not smoke marijuanas in: 1

Years in jail Shypixel could have received for our super illegal search: 10

Years since US Supreme Court ruled that kind of search super illegal: 1

Cost of bullshit “paraphernalia” ticket even though Officer Brian didn’t find any paraphernalia, just weed, but then we probably would have fought it because of how it was super illegal and he knows that: $270

States Shypixel is never going back to until they have learned their lesson: 1

Cabinets that flew open because there was such jouncing on the BQE: 6

Table that collapsed because there was such jouncing on the BQE: 1

Table that is broken now even though Shy fixed it after it collapsed on the BQE: 1

Investment in infrastructure needed according to the American Society Of Civil Engineers: $3.6 trillion

Gigs of data spent on work, not even tv or nothin’: 44

The number of good American workers the old organic tomato hippie guy behind "Wymatoes" has employed in past 30 years, vs. the number of bad Mexican workers he has had, according to Wyoming PBS: 1:2

Wonkers who hooked up after a Drinky Thing (that we know of): 2

Rad lesbians at Drinky Things (that we know of): 7

Loaded guns at Drinky Things (that we know of): 1

Loaded guns at Tommy’s house: all of them, Katie

Times Shy got his heart blessed: 1

Pounds of mail waiting for us at home: 9

Times wonkers sneaked off and picked up the tab before we could, and we are gonna punch them: 2

Mystery smells emanating from the Wonkebago: 3

Money wonkers stuck in my pocket like common pervos: $615

Cost, restaurants: Nope, not gonna do it

Cost, Drinky Things: I will add it up at a later date

Cost, cash for bullshit: Still no

Total amount spent: Maybe a teensy bit more than we wanted there is simply no way for me to know because fuck you you can't make me

How much you are giving us RIGHT NOW for being THE RADDEST: ???

Number of Official Babies and RVs on the road for Gawker, Vox, Buzzfeed and all those other people who are supposedly "covering" the campaign trail: GOOSE EGG.

How good of a time we had: an almost always very good time!