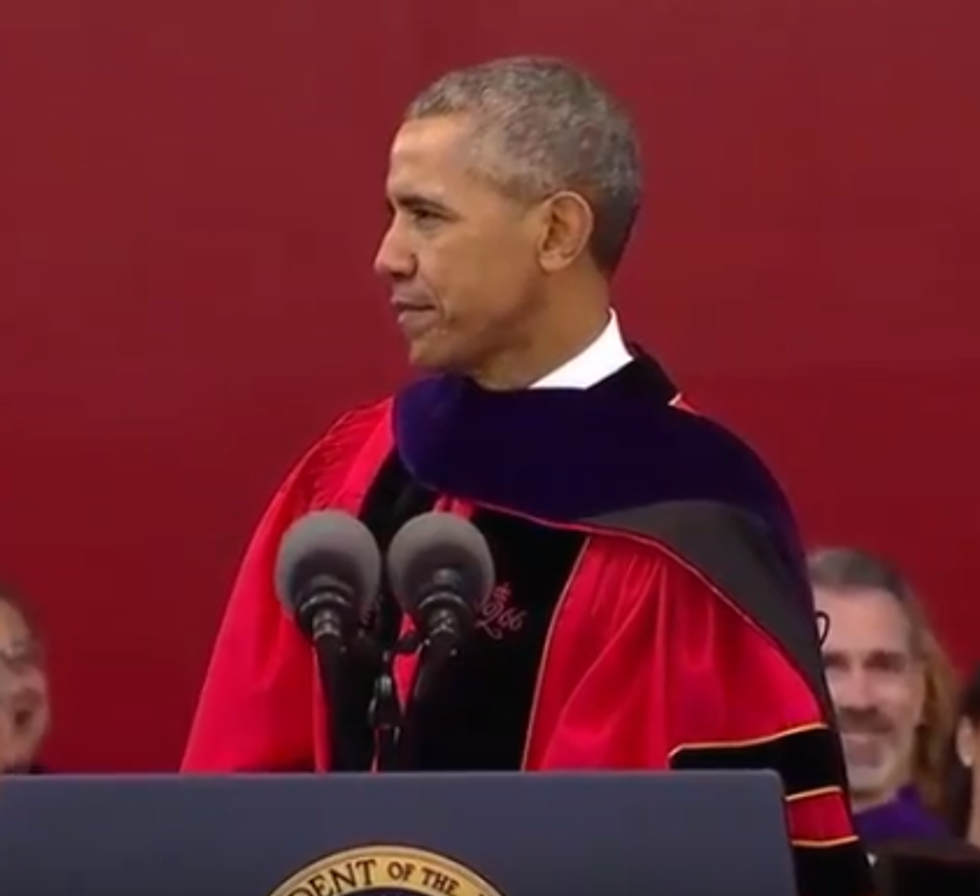 We have talked at you many times over the past year about how much we LOVE the Don't Give No Fucks version of President Barry Bamz McGee. He's been having so much fun saying what he really thinks! Like, remember when all those GOP senators and presidential candidates were soiling their didies over Syrian refugees? Obama had something to say 'bout that.

[wonkbar]<a href="http://wonkette.com/596142/pity-obama-wont-say-what-he-really-feels-about-whiny-coward-republicans"></a>[/wonkbar]This weekend, giving the commencement address at Rutgers University, Obama decided to pack A BUNCH of amazing Don't Start No Shit, Won't Be No Shit moments into one happy nice time speech, and we, your loving Wonkette, have sifted through all the boring parts about "You are good graduates!" and "Bet you all got purty drunk last night!" to give you the five best times Barry told motherfuckers their business during his talky talk.

Here is the full video, if you have forty-two minutes to spare:

And now, a bunch of Fuck You quotes from Barry:

This, lovelies, is glorious:

The world is more interconnected than ever before, and it’s becoming more connected every day. Building walls won’t change that.

[I]f the past two decades have taught us anything, it’s that the biggest challenges we face cannot be solved in isolation. When overseas states start falling apart, they become breeding grounds for terrorists and ideologies of nihilism and despair that ultimately can reach our shores. When developing countries don’t have functioning health systems, epidemics like Zika or Ebola can spread and threaten Americans, too. And a wall won't stop that. [...]

The point is, to help ourselves we've got to help others, not pull up the drawbridge and try to keep the world out.

Then he proceeded to just KEEP SAYING "Building walls won't change that" over and over, in case we missed his subtle point about how Trump is a fucking fool.

Also, fuck Donald Trump. Wait, didn't we just do that one? Anyway, fuck him and all the other stupid people too.

President Barry The Professor has some thoughts about idiots who believe demonstrably untrue things. People like Republicans, maybe?

Facts, evidence, reason, logic, an understanding of science -- these are good things. [...]

But if you were listening to today’s political debate, you might wonder where this strain of anti-intellectualism came from. So, Class of 2016, let me be as clear as I can be. In politics and in life, ignorance is not a virtue. It's not cool to not know what you're talking about. That's not keeping it real, or telling it like it is. That's not challenging political correctness. That's just not knowing what you're talking about.

Remember that time Inhofe brought a snowball onto the Senate floor to "prove" that global warming wasn't real? The president still cannot believe that happened, and neither can we:

A while back, you may have seen a United States senator trotted out a snowball during a floor speech in the middle of winter as “proof” that the world was not warming. [...]

Imagine if Benjamin Franklin had seen that senator with the snowball, what he would think. Imagine if your 5th grade science teacher had seen that. He’d get a D. And he’s a senator!

Pffffft, he wouldn't even get a 'D' probably, Inhofe is so stupid.

Know those people who long for the olden timey days when kids had manners and black people couldn't vote? Obama has thoughts:

When you hear someone longing for the “good old days,” take it with a grain of salt. [...] I guess it's part of human nature, especially in times of change and uncertainty, to want to look backwards and long for some imaginary past when everything worked, and the economy hummed, and all politicians were wise, and every kid was well-mannered, and America pretty much did whatever it wanted around the world.

Guess what. It ain’t so. The “good old days” weren’t that great.

Then he listed a whole bunch of ways America is better than it used to be, to rub it in for the idiots out there who are pretty sure America died the day we elected a black president. TWICE.

Finally, fuck all the whiny snowflake baby college students with their microaggression-free zones where nobody is allowed to disagree with them.

Oh yeah, President Mom Jeans has some #DadThoughts to share with college kids about how the real world actually works, and he said it TO THEIR FACE:

I know a couple years ago, folks on this campus got upset that Condoleezza Rice was supposed to speak at a commencement. Now, I don't think it's a secret that I disagree with many of the foreign policies of Dr. Rice and the previous administration. But the notion that this community or the country would be better served by not hearing from a former Secretary of State, or shutting out what she had to say -- I believe that’s misguided. I don't think that's how democracy works best, when we're not even willing to listen to each other. [...]

If you disagree with somebody, bring them in and ask them tough questions. Hold their feet to the fire. Make them defend their positions. If somebody has got a bad or offensive idea, prove it wrong. Engage it. Debate it. Stand up for what you believe in. Don't be scared to take somebody on. Don't feel like you got to shut your ears off because you're too fragile and somebody might offend your sensibilities. Go at them if they’re not making any sense. Use your logic and reason and words.

Yes, ma'ams and sirs, the president of the United States just told the little children to USE THEIR WORDS, and that is so fucking awesome we cannot even, therefore this post is over.