The Children Are Here, And They're FUCKING MAGNIFICENT 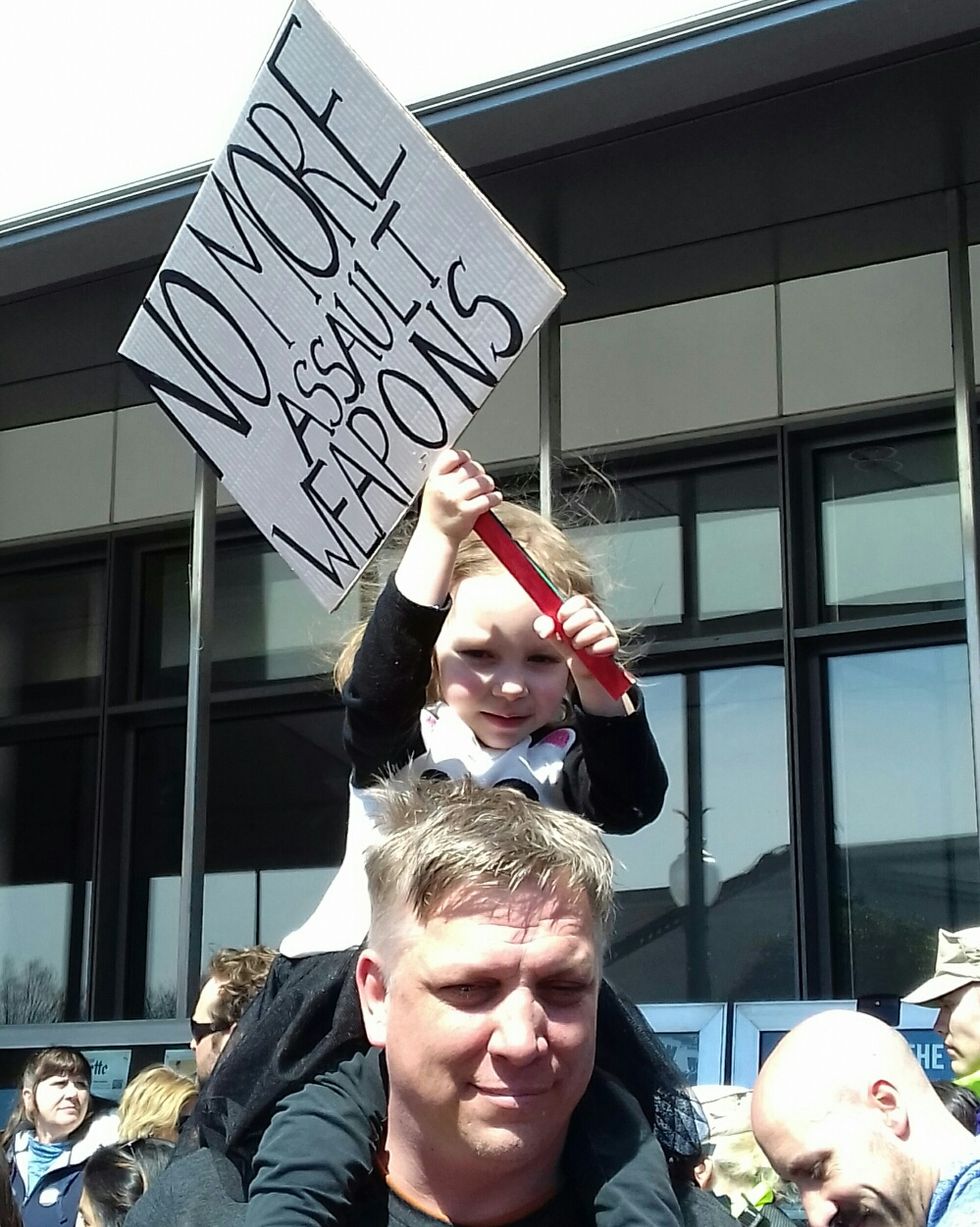 We picked the coldest, dreariest corner of Washington DC for our loves and terrible ones to meet us, and we made them get there 90 minutes early. But unlike at the Women's March, you could walk right off the subway without a 90-minute wait, and you could walk right onto Pennsylvania Avenue instead of being shut out by the massive crowd, forced to make your own promenades four or six blocks away. So by the time we walked together to the Teens March for Our Lives, half of our two dozen friends had melted away (and we don't blame them!) to precede us to the rally.

(Yes, the Women's March was bigger; no, there weren't a million people in DC yesterday; yes, it was still massive, but you could move and see and use a bathroom.) "Young lady," we would say to a young lady, "who is the girl singing?" "That's Miley Cyrus," she would answer. And "That's Ariana Grande," said another one, another time. There wasn't a single grownup on the stage, not even Michael Moore. This was only children, yelling and screaming and beseeching us, ENOUGH is ENOUGH.

Two boys sang a harmony, and behind me, an old white man -- the burly kind, with the skin cancer nose, who you usually see in a 101st Airborne hat -- wept openly. Old black women wept. Beth was a mess. I cried for four hours. Shy pretended he did not weep, but I am pretty sure singing happy birthday for Nicholas Dworet, who died five weeks ago, did him in.

The Parkland teens made sure to bring in kids of color from around the country -- Chicago a lot, and LA, and Oakland, I think -- to share the stage and remind America who has been bearing the brunt of our guns. "Oh no, he's fucking TINY!" someone would shout when another 9-year-old took the stage, and we would all cry our eyes out again. (It was me.)

Martin Luther King's granddaughter, Yolanda, was a 9-year-old pro, exhorting the crowd through a call and response to "NOW SAY IT LIKE YOU MEAN IT" and then, impishly, "and you can give yourselves a hand." The girl has been to church a time or two! For the first time that day, instead of ringing chants of "VOTE THEM OUT" there were loud cries of "VOTE HER IN!" and we all got to laugh and smile.

It was an emotional wringer, and we were wrung dry. At times I felt there was too much emotion, I was being manipulated. But how do you tell the story of your dead brother, and you are 11 now and five when it happened, with just the facts? That boy, Christopher, was tiny too -- FUCKING TINY -- and we would be in another river of tears.

Or marvelous Samantha Fuentes -- did she say she just threw up onstage? The internet tells me, yes, she did -- and then shouted I JUST THREW UP ON INTERNATIONAL TELEVISION AND IT FELT GREAT -- and then finished her speech. That is more poise -- approximately 1300 times more poise -- than I show even when I fall while bowling and everyone congratulates me after. Samantha Fuentes is FUCKING MAGNIFICENT.

What will happen now do you think? the middle aged and old people said on the train. They didn't want to say what they were thinking -- that this too might not be a turning point but a failure to defeat the NRA and its insane intentions to give every 10-year-old access to a gun. That once again the NRA would win, all the Marco Rubios in its deep, ugly pockets. Could the children actually lead us? The Children's Crusade, after all, ended not with Jerusalem freed from the "infidels," but with the children sold onto slave ships.

But we can have their backs -- the 88-year-old man on the train whose sign said OLD PEOPLE VOTE EVERY SINGLE TIME, and all the middle-aged mothers like me, and the husbands who cherish their children but for real, not like how Donald Trump "cherishes" a woman. And there are so many of us, so many millions, and we will vote, and we will end our nation's insane bloodlust at the ballot box. I have never felt more hope and joy -- okay, the morning after Obama's election, but that's the ONLY time in my 45 years when there was such a clarity of goodness in our nation's collective heart.

My mom was born in Hawaii, and is the same age as Obama's mother, so she feels like he is her child too -- the child of her entire generation. I feel the same way about these marvelous, brave, beautiful teens. They're all of ours, they belong to us.

And we will do this for them, and we will do it behind them, will have their goddamn backs for once, because our babies are FUCKING MAGNIFICENT.

Thank you from the bottom of our hearts (and our wallet) for sending us to this march. If you happen to still have some cash left over this month, we'd be happy to take it.