The Corner! The Corner Knows Why Obama Hasn't Declared War On Iran Yet 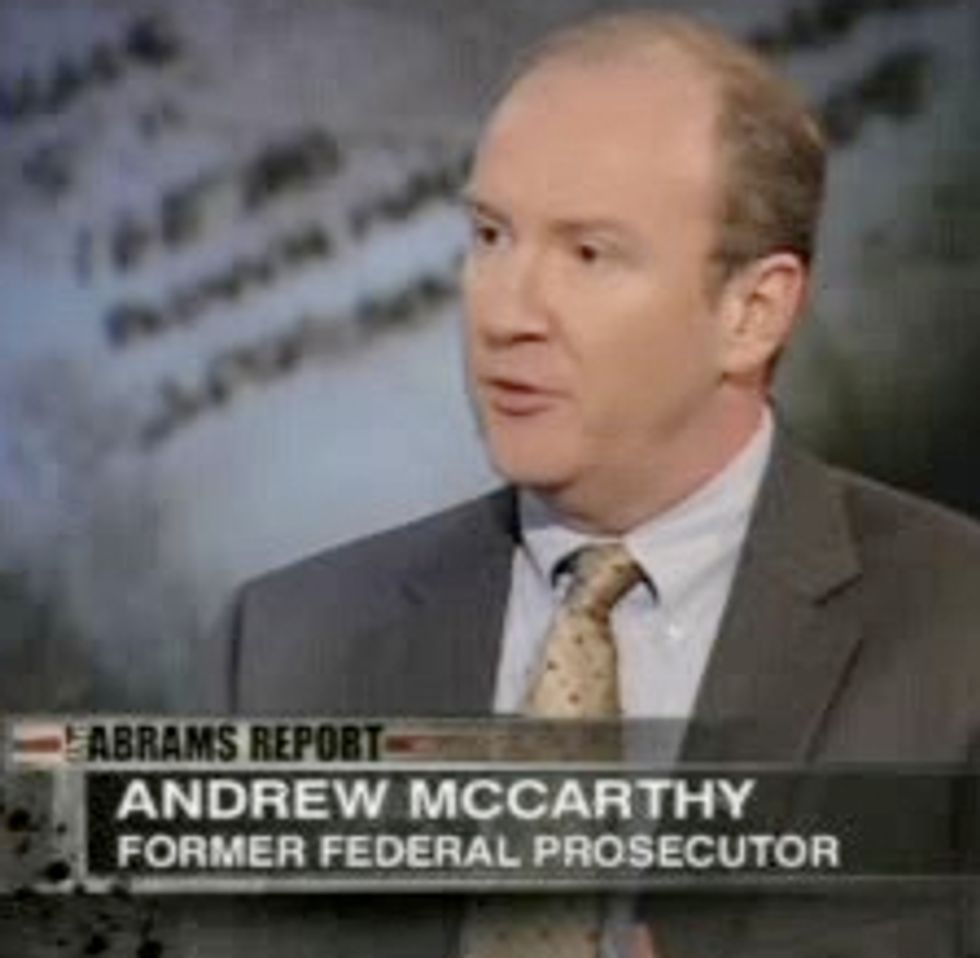 Very smart ex-prosecutor person Andrew C. "Andy" McCarthy knows most things about Barack Obama, including all of his secrets. McCarthy'stop achievement in life has been proving that Bill Ayers ghostwrote Obama's memoir Dreams Of My Father. Not many people knew about this, and it was a journalistic scoop, and so is this: "The fact is that, as a man of the hard Left, Obama is more comfortable with a totalitarian Islamic regime than he would be with a free Iranian society." That's the fact, okay?

The fact is that, as a man of the hard Left, Obama is more comfortable with a totalitarian Islamic regime than he would be with a free Iranian society. In this he is no different from his allies like the Congressional Black Caucus and Bill Ayers, who have shown themselves perfectly comfortable with Castro and Chàvez. Indeed, he is the product of a hard-Left tradition that apologized for Stalin and was more comfortable with the Soviets than the anti-Communists (and that, in Soros parlance, saw George Bush as a bigger terrorist than bin Laden).

It's a mistake to perceive this as "weakness" in Obama. It would have been weakness for him to flit over to the freedom fighters' side the minute it seemed politically expedient. He hasn't done that, and he won't. Obama has a preferred outcome here, one that is more in line with his worldview, and it is not victory for the freedom fighters. He is hanging as tough as political pragmatism allows, and by doing so he is making his preferred outcome more likely. That's not weakness, it's strength — and strength of the sort that ought to frighten us.

There you go: another one of Barack Obama's secrets that Andy McCarthy knows is that the President would rather have the worst sort of Iranian regime remain in place than a flourishing democracy, in this completely hypothetical black-and-white choice he's invented that has little to do with the hour-to-hour situation in Iran.

Even Starburst got a little freaked out after reading McCarthy's post, so McCarthy clarified:

Finally, I detect in your post a sense that I'm this close to the fringe. Saying, "whatever policy differences we have with him," is generally a prelude to claiming that some objection that has been lodged is beyond the realm of acceptable argument. I'll say two things about that. First, if you look at the sweeping changes that have occurred in the past five months, I think what I argued before the election about the significance of Obama's Leftist background and radical connections was on the mark. Second, I am saying what I am saying because I respect the president. As I said in the last post, I don't think he is weak at all. To the contrary, I think he has strategic goals that he pursues in highly disciplined, tactical pragmatism. He is a force to be reckoned with, and I don't think you reckon with him by hopefully assuming that, on some level, he shares our ideas about what's best for the country and the world. I credit him for wanting what's best — but only as he sees it.

C'mon Starburst, get your fuckin' head in the game. He *knows* that the President wants to do what's best for the country. It's just that for him, that means establishing an American caliphate, okay?

Understanding Obama on Iran [The Corner]

Re: Re: Understanding Obama on Iran [The Corner]