The Deleted Comments Before Christmas 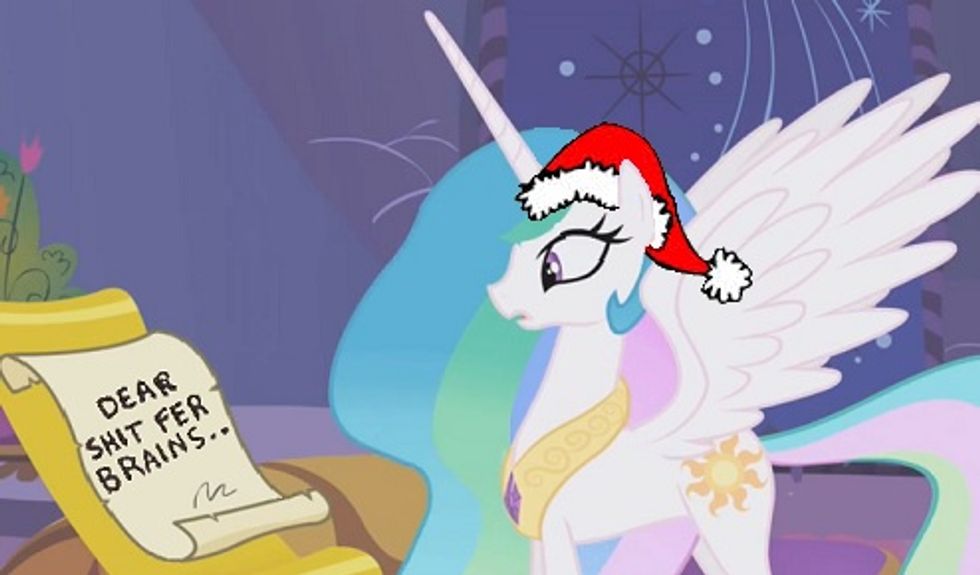 Call us old fashioned, but we still call it the feast of Princess Sun-Butt Invictus

It's the morning of the night before the annual Sacred Baby Festival, and we come bearing gifts -- we're fresh out of lords a-leaping, and the five gold rings all have TRUMP stamped on them, so you'll have to settle for some festive stupid from our Deleted Commenters.

We had a brief visit this week from our old copy-paste visitor, turgid love muscle guy, this time going under the moniker "DestroyPervertedLeft," but he didn't get into the holiday spirit at all. His copy-pasted trolling wasn't even trying this time, in his visit to our story on Steve Bannon, possible presidential candidate:

Weak. Sad! You'd think he could have at least told us we're not allowed to don any gay apparel or bring out the faggy pudding.

A nice person calling himself "spric" dropped by several stories to share his wisdom before he was banhammered. He's looking forward to the glorious day when Hillary Clinton and everyone else in the Obama administration get JUSTICE:

"Spric's" comments are brought to you by the National Federation of Exclamation Point Manufacturers!!!! And unnecessary spaces !!

Clearly the federal prosecutors need a refresher course at the Derek Zoolander School For Kids Who Can't Litigate Good.

In response to the declaration of a mistrial in the badly botched federal case against Cliven Bundy, "spric" offered some support for the Whinestone Cowboy. No, it doesn't actually matter that the policy he thinks Donald Trump will pursue toward public lands exists only in his own fevered imagination -- the guy believes the president has the ability to order his political enemies into the federal prison of his choice, so why wouldn't Trump also do everything else this rightwing doofus dreams of?

Bundy Family, Sovereign Citizen Loons Have Special Constitution That Says They Can Steal All Our Sh*t

To be fair, it's entirely possible Donald Trump also believes he can send people to prison whenever he wants !!! But on public lands, at least, Trump merely wants to allow as much exploitation of them as possible !!!! We think "spric" may have seen the headline about Trump's plan -- already being contested in the courts -- to reduce the size of Bears Ears National Monument by 90 percent and gotten a bit carried away !! But even if Trump wins that dubious battle, the areas lopped off the monument were public land to begin with, and will remain federally owned !!! Not even Donald Trump believes the special Bundy copy of the Constitution that says the federal government can't own any lands other than military bases and the District of Columbia, sorry !!!!!!!

The poor lout almost laughed himself into a comma (or up his own semicolon) at the news of Memphis city officials' clever stratagem to take down Confederate statues, because did you know that all Democrats still support slavery? Of course, when someone restates Dinesh D'Souza's dumb talking points this directly, they look even more stupid than usual:

Democrats removing statues of Democrat heroes? Would you imagine that !!

Yep, Dems sure love them some slaveholders. Which is why they're taking down the statues, because... uh... hypocrisy, that's it.

Dr. Carson is the most pious Christian and most intelligent person to ever serve in Washington. The nation and world will be so lucky if he can succeed Trump in 2024 !!.

You're going to need your pitchforks handy for this one.

Finally, "spric" explained it's a truly wonderful thing that Congress still hasn't reauthorized the Children's Health Insurance Program, because it's not insurance, it's a handout, and also those kids haven't earned healthcare, so please let them hurry up and die, and reduce the surplus population (see, he's Christmassy!):

Chips is a welfare program, not insurance !! Not an insurance spot on it !! It is financed by the sweat of the American taxpayer tor the benefit of (usually illegitimate) children of indolent shiftless parents !!

Now, there's a man who understands Christianity -- no health care for illegitimate children. You certainly didn't see Jesus going around healing people without first checking to see whether their parents were married or sufficiently rich, now did you?

Also this is your open thread!

This next one's a bit dated, but it's still worth a look. A couple of weekends back, before the Alabama special election (yes, really, that election was only 12 days ago!), we learned from "Whatevs" that the media's perfidy was the real reason Moore would definitely win:

Like someone else said, the WaPo should have given voters more time to process all of this when they still had choices. Not when folks were stuck with Moore. Especially not with 40-year-old allegations that can't be verified. Don't blame people for voting for Moore when the media played games.

WaPo had this story in the bag well before they released it. They waited until the primaries were over. The same thing happened with Trump and the Hollywood Access tape.

That was a new one for us -- we'd certainly seen complaints that the accusers couldn't be believed because they only came forward a month before the election, but damned if we'd seen anyone claiming the Washington Post itself sat on the Roy Moore molestation accusation for months, then sprung it on Moore just in time to ruin him. We suspect "Whatevs" doesn't have any idea how journamalism works, really. You go to press when the story's ready, especially if you're in a good old-fashioned newspaper war with the New York Times.

But we did our own due diligence on that derp, just to see if anyone in the wingnuttosphere was pushing such a claim. The closest thing we could find was a dumb piece at The American Thinker (our favorite oxymoronic blog name) that wondered who planted the obviously fake story, and asked "Why did the Washington Post reporters wait until after no one else could be put on the ballot to run a 40-year-old story?"

Still, "Whatevs" stuck to their badly-aimed guns, insisting "WaPo knew about these allegations during the primaries, why didn't they release this info then?" as if it were something everyone just knew. That's not the timeline the WaPo reporters gave, for what it's worth (which is absolutely nothing, because of course they lie all the time). Reporter Stephanie McCrummen says she first heard rumors about Moore's creepy behavior toward teens in "early October" while researching a whole 'nother story entirely. Here's a nifty little video on how the story came to be -- if you believe the lying Fake Media reporters who made it all up:

The media had the Hollywood Access tape 10 months before they released it. They waited until a few weeks before the election to release it. That was done for maximum possible damage to Trump. They should have released it during the GOP primaries. I am telling you that people are tired of the media playing games like this.

As for proof, "Whatevs" isn't going to do your damn research for you. So we looked into it, and it turns out that one media outlet did scandalously drag its feet -- for less than a week. NBC -- which owns "Access Hollwood" -- learned of the tape the Monday before someone handed a copy to the Washington Post's David Fahrenthold on Friday, October 7, 2016, but the network's legal department futzed around for several days, so NBC only rushed out its version of the story after WaPo broke it. Again, that 10-month time lag doesn't appear on the interwebs anywhere but in the comment by "Whatevs." It's not a lie, though, since they believe it.

Deleted Comment Of Christmas Past: Get Your Jews Out Of My Sacred Baby Festival!

Finally, it's time to re-post our Holiday Classic Shitferbrains from 2014, which came in reply to a story about the annual Menorah lighting in Springfield, Massachusetts. We went and made fun of a city council member who celebrated the Hanukkah festivities by proclaiming, "Jesus is the reason for the season."

Our mockery of that interfaith reminder to celebrate Christmas at the church or synagogue of your choice soured the eggnogg of one "Petermillman1," who set us straight:

The councilor is absolutely correct;Jesus is the only Reason for the season.There is no such thing as a mythological “holiday season.” There is only the Advent and Christmas season. Hanukkah is not a holiday and you can’t find it in the Jewish version of the Old Testament. If the Jews want to win friends and influence people, then they should cease trying to step on the Christian Christmas. As a Greek Orthodox Christian , I find Hanukkah to be very offfensive. If the Jews want to make a big deal about a Jewish holiday, then they can emphasize Rosh Hashana, Yom Kippur or even Purim, but stay away from Christmas.

Oh, those dopey Jews and their funny version of the Old Testament -- but if you want real blasphemy, you should see the Jewish Version of the New Testament. And no, First and Second Maccabees don't exist, not at all, so you really have to wonder why Jews keep trying to horn in on Christmas. Next they'll be writing Christmas carols and claiming the little lord Jesus was himself some kind of Jew.

Yr Wonkette is supported by reader donation's !!!! Click here to help us documen't all the vagaries of Wingnut Punctuation !! IN ALL CAPS !!!!!!