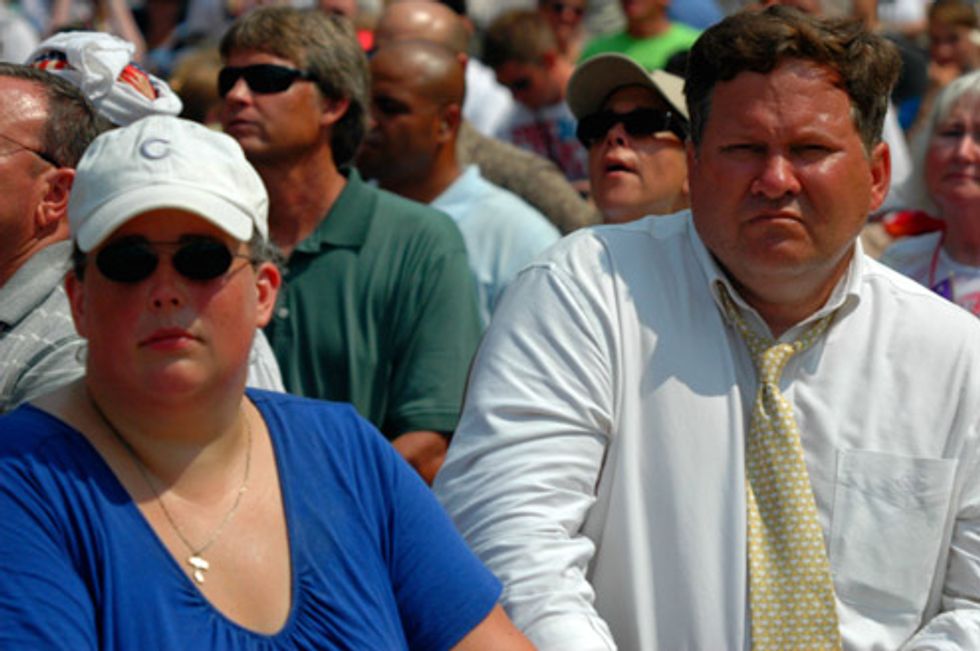 GlennBeckPalooza is finally over, as you can probably tell from the smoking ruins of America left in the wake of the Martians' attack. "Okay we have HAD IT with you idiots," the Martians said, before bombing every last Taco Bell and WalMart from coast to coast. Now there's nothing left. But did Glenn Beck's followers at least have fun at the Historical better-than-MLK gathering of the diabetic? Not so much. Not so goddamned much at all. Let's have a last glance at the "Restoring Horror" meetup, courtesy of Wonkette contributing war photographer Dana Ryan, and never speak of this wretched event again.

We doubt this guy even had fun, and it was his Jesus-Hitler party! What a fuckin' letdown, right Glenn? Even you were probably surprised to see this slow-moving decrepit old crowd of toothless whiteys playing unintentional bumper cars on their Cooler Cruizers.

But how many fools actually showed up for this thing? As usual, estimates were lower when Jesus-hating math experts were involved: CBS News hired AirPhotosLive.com to do aerial counting and came up with 87,000. "With a 9,000-person margin of error," Newser reported, "the real number could be anywhere between 78,000 and 96,000."

Actual insane person Michele Bachmann asked her friend God how many people were there and He told her "totally more than a million," which is why she then said, "We're not going to let anyone get away with saying there were less than a million here today -- because we were witnesses."

It was cool that Courtney Love's grandma showed up, though. Or was it?

Does anyone have any idea what's happening here? Is this some kind of translation service to an even lower form of language than whatever word-blender nonsense spews from Palin's awful fishmouth?