The Fartknocker Report: Help, Help, Sarah Palin Is Being Repressed! 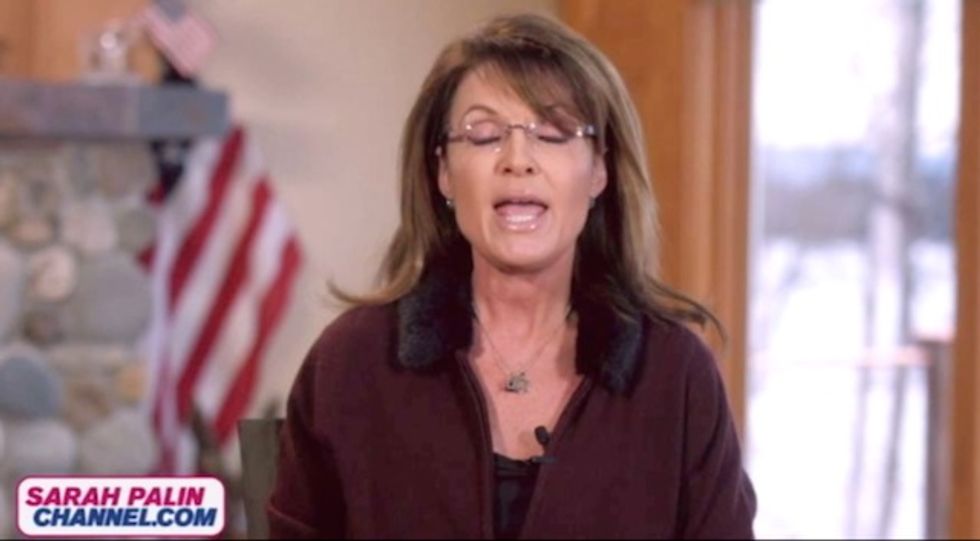 In one of her three new videos this week — seven minutes and 34 seconds of total run time, for those keeping score at home — Sarah Palin decided to squawk about Lois Lerner, because apparently that horse is not yet dead and requires further beating. Her screed goes deep, deep into the realm of alternate history, and the whole thing is worth a look. Let's Wonksplore!

[Lois Lerner] helped engineer the targeting of conservative groups and tried to get the Department of Justice to prosecute conservatives.

Nothing in that sentence is true. The "engineering" of the "targeting" was done by IRS employees in the agency's Cincinnati office. Lerner didn't know about the Cincinnati office's practices until the summer of 2011, and when she did learn about them, she told the Cincinnati office to knock it the f&%k off — even Darrell Issa accepts this timeline, but really, why would Sarah Palin let the facts start to bother her now?

Also, there is literally no evidence that anyone at the IRS spoke to anyone at the Department of Justice about "prosecuting" any political group, mostly because it's really dumb to call for tax prosecution when you haven't conducted an audit yet. Even the right-wing Judicial Watch doesn't accuse Lois Lerner of trying to get the DOJ to prosecute conservatives, because even they can recognize the difference between obtaining a legal advisory pursuant to a Senator's question in a public hearing and advocating for prosecution.

Keep going, Sarah, this is getting fun. And by "fun," we clearly mean, "God, don't you ever shut up?"

[...]Lois Lerner, she not only didn't really get punished, she was rewarded. Lois Lerner received more than $129,000 in bonuses during the exact period when the IRS targeting was at its worst! I bet some folks in the Obama administration believed she earned every penny of that. That's pretty sickening.

She just bets it, you guys, she just does. Isn't that sickening?

After all, it's pretty clear that the IRS was weaponized and used against American citizens to protect the President's party and the president himself from a grassroots, Tea Party movement that threatened to stop his left-wing agenda — a Tea Party movement that, well, it was just asking questions, trying to hold our government accountable.

If the IRS was indeed attempting to protect the President, then why did it also look into progressive groups? This is yet another example of the reverse-communist jujitsu Obama learned at his Indonesian madrassa, or something.

Palin is correct, however, when she claims that the Tea Party was "just asking questions." Let's recall what some of those questions were:

What else ya got, Governor Quitterface?

Mmmm, the president didn't like that. Lois Lerner, though, heck, she was laughing all the way to the bank! She's still laughing. She's collecting her taxpayer-paid federal pension still, while the Obama Administration continues to obstruct and stonewall any investigation trying to get to the bottom of this and stop this corruption in the IRS.

Lois Lerner is indeed collecting a federal pension: that'll happen when you've worked for the federal government for more than three decades. The laughing part, though? We suppose that counts as "sarcasm" rather than "baseless speculation," because we're not sure what's so funny about seeing your career sacrificed on the altar of Darrell Issa's political ambitions.

Oh, and the "continues to obstruct and stonewall" thing? That's not what Darrel Issa seems to think happened. Remember when Chairman Issa said this? Because Sarah Palin doesn't.

"I’ve never said it came out of the office of the President or his campaign. What I’ve said is, it comes out of Washington."

We're done with this post for now. It is a gloriously sunny day here in our nation's capital, and we are done swimming upstream against the torrent of ahistorical bullshit unleashed by the spring thaw up in Wasilla. We are embedding the full video for hate-watching purposes, but Jesus donor-hiding Christ filling out a Form 990, it never ends with this woman...