The First Electric Chair, Or The Time Thomas Edison Helped Light A Man On Fire 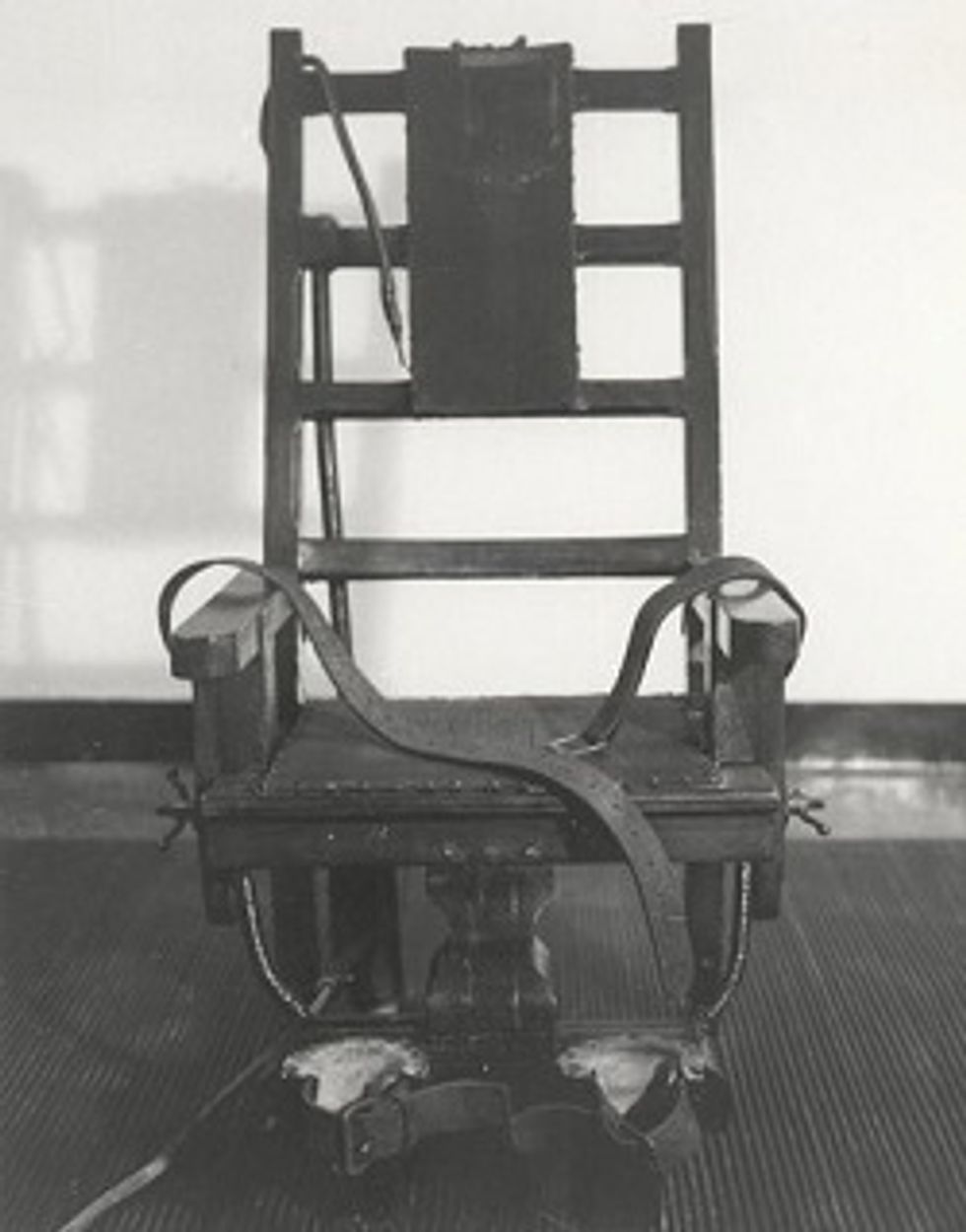 Just when we think we have absorbed the terrible details of thebotched execution of Clayton Lockett, a new story pops up that adds something to make our sphincter clench tighter than Wayne LaPierre in a Quaker meetinghouse. We cannot add anything to the outrage that others have expressed so eloquently. Instead, the news drove us to pull a book off our shelf that we first read at least a decade ago. Executioner’s Current: Thomas Edison, George Westinghouse, and the Invention of the Electric Chair is a history of the first execution by electrocution in 1890, a story some of you might be familiar with. Flipping through it, we were struck by how much the arguments about jurisprudence that led to the chair’s invention mirrored the arguments that are popping up again in the wake of Lockett’s death.

In a nutshell, this is the story. Having decided that execution by hanging was too barbaric for modern civilization and that the technological wonders of the Industrial Revolution must include a more humane and painless way to kill condemned prisoners, the state of New York commissioned a group to study the feasibility of other execution methods. The group, known as the Gerry Commission, studied all sorts of methods including the garrote and, in a precursor to our debate this week, shooting up the condemned with enough morphine to kill. In the end, the commission decided on electrocution, and in 1888 the state legislature passed the Electrical Execution Act. Having determined that the best way to accomplish execution by electrocution was to strap the condemned into a chair to restrain him while electricity was pumped through his body (the idea actually came from a dentist who served on the Gerry Commission who had first thought up electrical execution), New York needed someone to design, build and test the chair for its first use.

Enter Thomas Edison. The famous inventor was at the time locked in a war of sorts with George Westinghouse for the right to wire every town and city in America for electricity, Edison with his direct current system and Westinghouse with alternating current. At the time that New York passed its execution law, Westinghouse was eating Edison’s lunch. The Edison Company had invested heavily in DC and stood to lose an amount of money we would describe as a “metric shit-ton”.

Then Edison was approached by a man named Harold Brown. The self-taught electrical engineer thought AC was too dangerous to be used in public, and he wanted Edison’s financial resources to help him prove it. Edison resisted at first; as a progressive-minded individual, he was actually opposed to capital punishment. Then he realized that if he could help Brown build an efficient killing machine, he could tar AC as a killer current and wipe out Westinghouse, clearing the way for DC to corner the market. Another case of clear-eyed capitalism trumping moral values. Amurca!

Edison brought Brown to his laboratories in New Jersey and helped the engineer design and build the first electric chair using alternating current, which New York used to execute a convicted murderer by the name of William Kemmler in 1890. Like the execution of Lockett, it was terribly botched. To his killers’ surprise, Kemmler was still breathing after the first jolt of electricity, so they gave him a second one. The whole process caused his skin to catch fire and char him in front of the witnesses, and the blood vessels under his skin burst so blood ran down his face and arms. The sight was so disgusting the District Attorney fled the execution chamber, threw up, and then fainted.

Still, proponents of the electric chair who had witnessed the execution declared it a resounding success. Hardly anyone believed them. Still, the idea that electrocution or any other execution method met the punishment standards set out by the Eighth Amendment was never seriously challenged in the federal courts. (The 1972 case Furman v. Georgia that led to a de facto moratorium on executions in the U.S. for a few years dealt with the question of whether the death penalty was unconstitutional “because capital cases resulted in arbitrary and capricious sentencing.)

No state uses the electric chair as its sole execution method anymore (Nebraska was the last to stop using it, in 2010), though prisoners in a few states are given the choice of electrocution or lethal injection. Still, the history of capital punishment in America since at least the early nineteenth century has at its core a tension between our belief that we are an ever-evolving moral species and the cold, hard truth that any form of execution cannot be humane. It takes brutal force to extinguish life from a body – the force of electricity, of a bullet from a firing squad piercing a heart, of drugs overpowering internal organs until they shut down. All the legal protections in the world will never change that. It would be nice if all the wingnuts celebrating Clayton Lockett's painful demise could at least acknowledge that we are not an enlightened exceptional nation, but one with a streak of violent bloodlust as wide as the Mississippi running right down the middle. Frankly, we're not holding our breath.

Hey look, we forgot to make this funny. Um, buttsechs, also too.