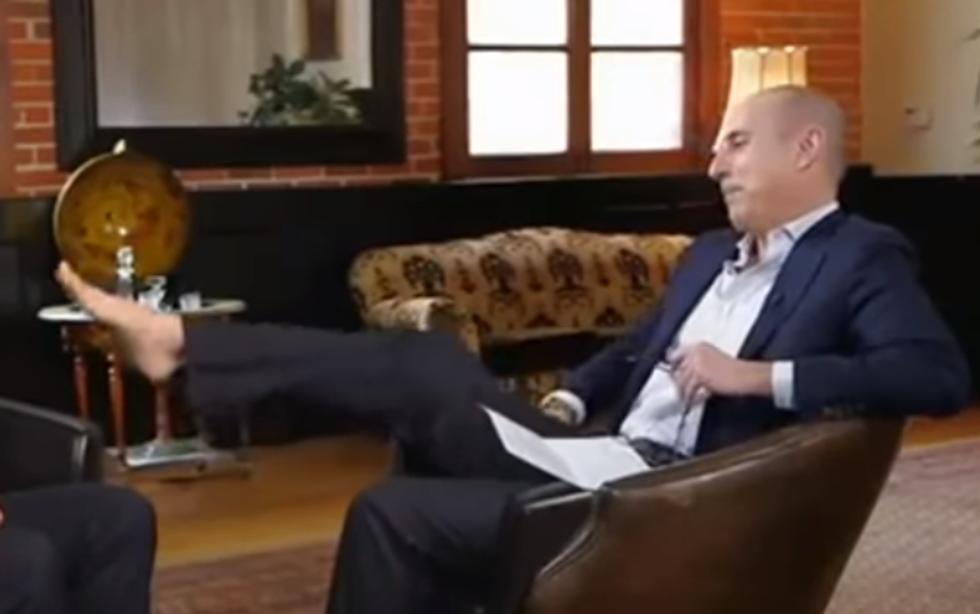 get that thing out of our face

We assumed the Matt Lauer Sex Pervert allegations about to drop were massive, considering how he was fired fewer than 48 hours after the first official complaint was filed. Well, here come the details, and hoo boy, they are fucking disgusting. Variety published the findings of its own investigation into Matt Lauer, and we aren't even going to attempt to rank which dirty detail is the grossest, because they are all grosser than gross. They are also a textbook example of a man pulling predatory shit for the sole reason that he thinks he can get away with it because of his position of power.

Let's just list them, starting with this, which is NOPE:

As the co-host of NBC’s “Today,” Matt Lauer once gave a colleague a sex toy as a present. It included an explicit note about how he wanted to use it on her, which left her mortified.

That is ... not how Secret Santa works, you fucking creep.

On another day, he summoned a different female employee to his office, and then dropped his pants, showing her his penis. After the employee declined to do anything, visibly shaken, he reprimanded her for not engaging in a sexual act.

WHAT THE FUCK? We, yr Wonkette, are a guy with a penis, and it has literally never crossed our mind to drop trou and show some dick to an unsuspecting human. Who does this? (Matt Lauer. Harvey Weinstein. Louis CK. Others.) What happened in their upbringings that made them think this is OK? (Rape culture.)

And he loved to engage in a crass quiz game with men and women in the office: “f—, marry, or kill,” in which he would identify the female co-hosts that he’d most like to sleep with.

That is not the appropriate way to play Fuck Marry Kill! Jesus Christ, Lauer is just sitting around ranking Savannah Guthrie and Hoda Kotb and all the rest? What the fuck is wrong with him? Did Roker participate?

He once made a suggestive reference to a colleague’s performance in bed and compared it to how she was able to complete her job, according to witnesses to the exchange.

Classy. Even when it was a consensual affair, he was a chauvinistic trash pig.

His office was in a secluded space, and he had a button under his desk that allowed him to lock his door from the inside without getting up. This afforded him the assurance of privacy. It allowed him to welcome female employees and initiate inappropriate contact while knowing nobody could walk in on him, according to two women who were sexually harassed by Lauer.

Goodbye, Wonkers. You have earned an open thread, by which we mean ALL OF US have earned it today.

Jesus, everything in the entire world is shit.