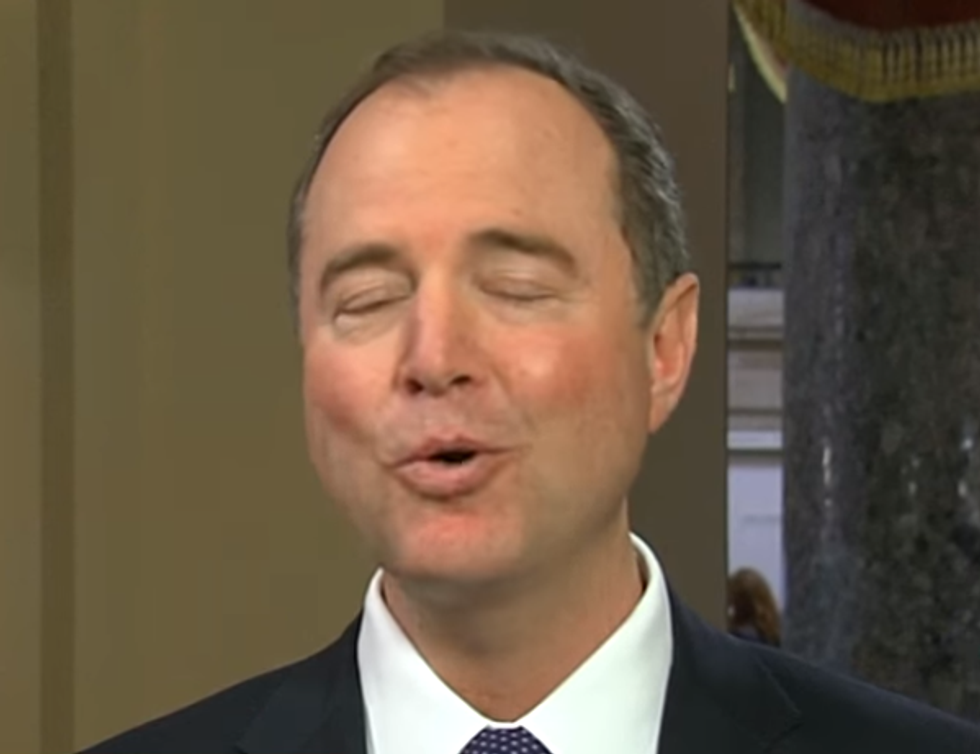 This is Adam Schiff's OH NO YOU DI'INT face probably.

Remember when THE MEMO was released last Friday and immediately the whole entire US and A and several small island nations started LMAO-ing so hard they caused a LOL-quake that was felt in China? That was fun!

On Monday, the House Intelligence Committee (HPSCI) held a hearing to vote on releasing the Democratic response memo, the one that takes a big red pen to the Republican memo and shows which parts are bullshit (all of it), according to not only the Democrats, but also the FBI and the Department of Justice. They voted that yes, it should be released, for transparency! And they released the transcript of their hearing today, for super transparency!

We are not live-blogging you the whole transcript of Monday's hearing, because girl it is Friday, so just no. But suffice it to say that oh man, the Democrats and Republicans on this committee hate each other, and oh man, we absolutely must take back the House in November, as in that is the bare minimum we must accomplish, because this is no way to run a country.

Here are five of the most MEOOOOOOWWWW HISS moments in the hearing transcript, accompanied by moving cat pictures:

In this section, GOP idiot Peter King says UH HUH the DODGY DOSSIER has been disproven, because Trump asshole lawyer Michael Cohen says he wasn't in Prague meeting with Russian agents when the DODGY DOSSIER said he was. In response Democratic Rep. Eric Swalwell is like "Cool story, bro. I fuckin' DARE Y'ALL to subpoena his records, instead of just taking his word for it."

And here is GOP idiot Mike Turner of Ohio, who is not usually so mouthy, who is OBSESSED with how the Devin Nunes memo PROVED that Hillary Clinton and the DNC funded the work that led to the production of the DODGY DOSSIER. Of course, the Democrats and everybody else in the world are like, "Babydoll, everybody knows that. Stop saying it over and over again IN ALL CAPS WITH EXCLAMATION POINTS, because what you are saying is meaningless." They make Republicans mighty stupid up there in Ohio.

Anyway, Turner gets why the DUMBO-CRAPS are mad and want to subpoena Michael Cohen's shit, because they must be real DEM-BARRASSED about how Hillary Clinton and the DNC funded Chris Steele's investigation, which we just now learned many months ago:

Perhaps Rep. Turner should go back to shutting the fuck up.

ADAM SCHIFF: Why are you fucking idiots talking about Michael Cohen anyway?

SCHIFF: But your stupid memo was about how the FISA court somehow improperly approved multiple FISA warrants against Carter Page The Literal Actual Russian Intelligence Asset, because dossier information was included amongst MULTITUDES OF OTHER INTELLIGENCE in that FISA application.

MIKE TURNER: Can I interrupt Eric Swalwell a lot?

SWALWELL: Yeah, once I'm done talking about ALL THE FUCKING TRUMP-RUSSIA CONSPIRACIES we have solid evidence of, and about how the Republicans flat-out lied in their dumb memo.

TURNER: Can I interrupt Eric Swalwell a whole bunch more?

TURNER: I can't eat you unless you let me interrupt you, with my mouth.

TURNER: Will you stop talking if I interrupt you again?

(This is a long one, but get ready, because Swalwell is very good here.)

MIKE TURNER: Can I interrupt Joaquin Castro too?

By the way, the question was whether Devin Nunes would FINALLY answer whether or not he wrote his dumb little memo with the White House, or if they wrote it for him, or told him what to say. At the very end, Nunes finally said, "there was no involvement in drafting the memo with the White House," because we guess it took him a whole week to figure out how to answer that question with a technically true answer.

By the way, here is a picture of Mike Turner, who is your new favorite Republican idiot on the intel committee:

OK it is your open thread now, you earned it.