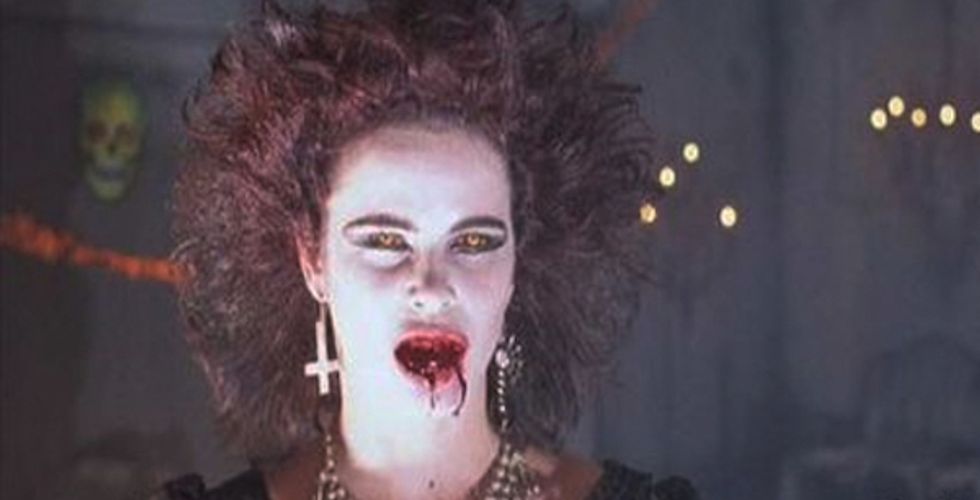 There are those who say investigative journalism is a dying art. Well, those people are clearly not watching "The Jim Bakker Show," whose intrepid investigation into demon-possessed anti-Trump women is sure to win a Pulitzer this year. Or some kind of award, anyway.

As you may know from our previous post on the subject, Jim Bakker and his gang all believe that those who participated in the Women's March are possessed by demons.

Actual real picture of a woman who did not vote for Donald Trump.

Except for his wife, Lori Bakker, who claims their opposition to Trump results from having been molested as children. Because why else would anyone have a problem with a president who likes to grab women by the pussy? Everyone else is ok with that! Lori Bakker is OK with that! Why, heck! Jim Bakker used to grab ladies by the pussy all the time! He even, allegedly, drugged and raped his church secretary Jessica Hahn, and then (not allegedly!) took $279,000 worth of money people donated to his church to pay her to keep her mouth shut. And would you say Jim Bakker is not a super great guy who should definitely have a lot of power? That would not be fair! That would make Jim Bakker cry! Despite this theory, the prevailing theory that we are possessed by demons (also, possibly, born of jackals) is still being investigated! On Tuesday's edition of the show, Bakker's buddy Lance Wallnau explained that all these women got possessed, because when Donald Trump moved into the White House, all the "witchcraft" that was there during the Obama administration was expelled, so all the demons flew into women who were molested as children and possessed them, and made them not like Donald Trump!

This, he explains, is why many of those marching against Donald Trump were against him for different reasons. If they weren't possessed by demons, they would all be opposing him for the exact same reason, because that is what non-demon possessed people do.

“What I believe is happening is there was a deliverance of the nation from the spirit of witchcraft in the Oval Office. The spirit of witchcraft was in the Oval Office, it was about to intensify to a higher level demon principality, and God came along with a wrecking ball and shocked everyone, the church cried out for mercy and bam—God knocked that spirit out, and what you’re looking at is the manifestation of an enraged demon through the populace.”

OH! Yes, that certainly seems like a logical thing to be thinking! Makes all the sense. Definitely a demon escaping from the White House and infecting all the womenfolk, who previously all definitely liked Donald Trump and thought he was swell.

A Non-Boring Thing Explaining Why We're Putting All Your Priests In Free Speech JAIL! (Also: We Aren't)

Let us also acknowledge that earlier in this clip, Jim and Lori Bakker discuss how this all stems, initially, from banning prayer in schools. Also, too, it was bad of these women to use the Constitution to say they have a right to march, and Jim Bakker believes that he and his people should have banded together to stop them from marching. And then he proceeded to talk about how the Johnson Amendment hurts his right to free speech. You know, because Jim Bakker is definitely a person who should be given more free rein in how his church spends its donation moneys.

He also briefly mentioned that he has friends "on the inside" who know that if we had not had a change of party in the White House, there would be no more Church or God or anything. Who knew that Bakker's friends from jail had such insight into our governmental workings?

And then they all laughed and laughed and cried and shared a delicious bucket of terrifying survivalist food, the end.