The Jon Stewart Of Egypt Has His Very Own Glenn Beck 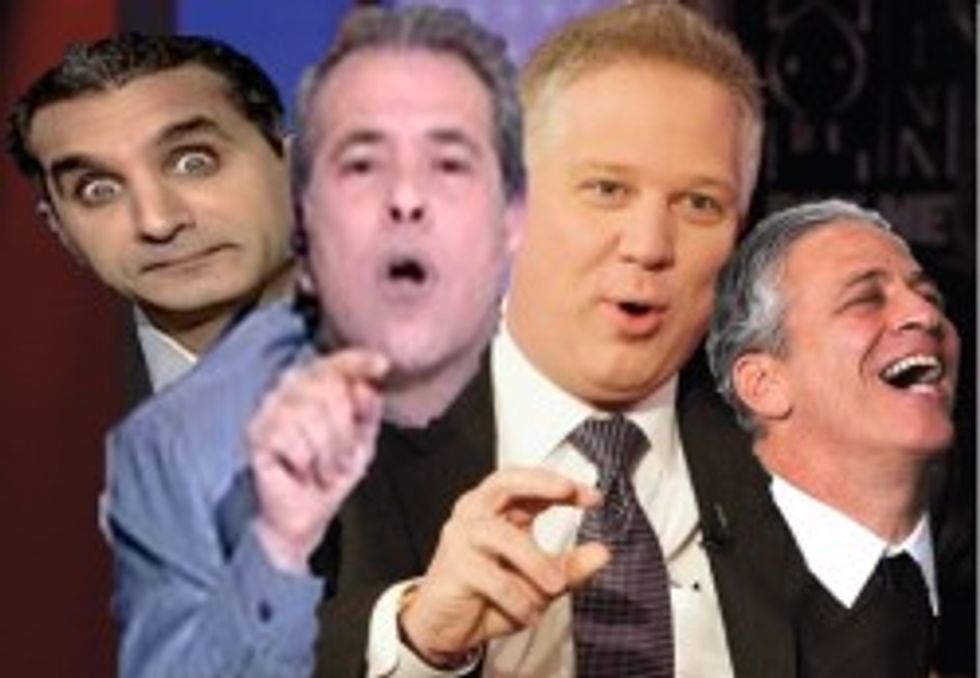 If it wasn't for Jon Stewart making them all laugh through the pain, libruhls would have slapped their own faces to death a long time ago. But now, the same comic relief is available to Egyptians, who are in much need of humor.

Egypt's two presidential contenders have each declared themselves the winner every day for the last week or so, not noticing that the military already made itself president. Egyptians also can't seem to decide if their former dictator, Hosni Mubarak, is dead, half dead, in a coma, rising from the dead or just faking death-by-coma in order to flee the scary prison where everyone wants to keel heem and get on to wherever Ken Lay moved after he faked his death. Uruguay?

But have no fear, the "Egyptian Jon Stewart," a guy named Bassem Youssef, is here to save the day. Youssef, an Egyptian cardiothoracic surgeon, saw the Daily Show while visiting America and wished Egyptians could have the same kind of show.

Mr. Youssef and some friends filmed a couple of political satire videos in Youssef's home and put them up on YouTube. Now he's the most-watched TV show in Egypt. He'll appear tonight (June 21) as a guest on Jon Stewart's Daily Show.

But these two yins (Stewart and Youssef) need some yangs for comedy fodder, right? So it's fitting that as Stewart used to have a grand old time laughing at Beck, Egypt, evidently, has its own Glenn Beck who stars on his very own version of Fox News! Yes, Egyptians actually know who Glenn Beck is (proving American exceptionalism once again), enough to call Tawfik Okasha, owner of Fox News-style propaganda satellite TV channel Al Fara'een, the Glenn Beck of Egypt. Tawfik doesn't have a blackboard, but he's just as insane as Beck and spouts conspiracy theories like vaginas do balls at a ping-pong show. Some even say Tawfik's the guy who started the false rumors of the "Necrophilia Law" that was propagated across the world's media by journalists who lie in wait for career-making stories about Muslim men earning the legal right to boink their dead wives (within a respectable six hours after death, of course).

But it looks like Tawfik Okasha won't be fulfilling any of his own fame dreams and appearing on Glenn Beck's TV radio show anytime soon. While they both have Muslim-hating, fear-mongering and Commie-outing in common, Tawfik believes that there's a worldwide Masonic super-plot to destroy the earth and Beck's been known to wear Masonic boy scout patches on his show. This just won't do. Besides, Beck seems a tiny bit brighter than his Egyptian counterpart. When Beck created his 9/12 project, at least it was based on a real date. Tawfik, on the other hand, is a bit date-challenged:

During one particularly heated broadcast, in which Okasha warned of an impending date when Freemason power would reach its zenith, a frantic studio assistant interjected to point out that there was no such day as 13/13/2013.