The Kids Of Stoneman Douglas High Would Like You To Kindly Stuff Your Thoughts, Prayers And Guns, Please 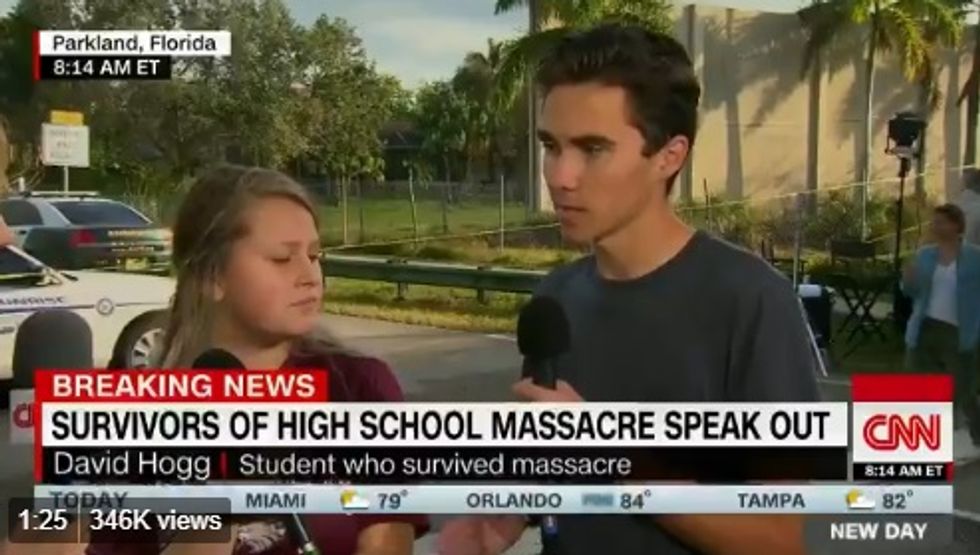 We closed out yesterday's Children's Garden of Stupid Shit Wingnuts Said about the Florida high school shootings with some terrific tweets from students at Marjory Stoneman Douglas High School, telling Donald Trump and Tomi Lahren to get bent. Let's review!

It turns out that the survivors of this particular massacre are an angry, mouthy bunch of kids who aren't especially impressed by thoughts and prayers, or by politicians telling them it's too soon to talk about doing something to prevent school shootings. No, they're saying, it's too late for our friends and teachers and that one kid who was always mouthing off in math class, and that's why you have to do something.

Let's have a moment of appreciation for some of these kids who aren't willing to let sit still for this anymore -- and keep in mind that if we don't act to reduce gun violence, there are going to be more and more grieving, angry kids out there. You might even think we grown-ups owe them a thing or two, like the chance to see fewer massacres.

For starters, there's Cameron Kasky, the 17-year-old up top being interviewed by Anderson Cooper. He wasn't buying that "now is not the time" stuff:

Everything I’ve heard where we can’t do anything and this is just out of our hands, it’s inevitable, I think that’s a facade that the GOP is putting up [...] After every shooting the NRA sends 'em a memo saying "send your thoughts and prayers, say let's not talk about it now, say 'This happens.'" This is the only country where this kind of thing happens. I’ve been hearing things from people, they don’t have gun drills like we do. We had to prepare extensively at Stoneman Douglas, and that shocked people. This is something that can be stopped and something that will be stopped.

Kasky didn't have a lot of time for people who think talking about "mental health" is a way to "get out of discussing gun control;" sure, we DO need better mental health treatment in this country, but the real problem, said Kasky, is that his school was attacked by "a 19-year-old who had an AR-15, which is a weapon of war," and it should be harder for anyone to get such weapons. Kasky wrote a guest op-ed for CNN about the attack, and said he feels "called" to make people aware of this problem. He and some friends have started a Facebook page called "Never Again MSD" to serve as a hub for ideas and activism.

He added that some people's "thoughts and prayers" don't seem to fit so well with their other priorities, either.

There is a section of this society that will shrug this off and send their thoughts and prayers but march for hours if they have to bake a rainbow wedding cake.

Then there's David Hogg, a 17-year-old senior who's the student news director at Stoneman Douglas; while he was hiding inside the school cafeteria's office with some 30 to 40 other students, he took out his phone and started interviewing classmates:

If he were to die, he said later, he wanted to leave behind some journalism:

A story that would echo on and show people that there's a serious issue in this country that people need to face, take a long, hard long at, and realize [that] blood is being spilled on the floors of American classrooms.

One of the girls Hogg interviewed said -- in complete darkness, while hiding out -- that she'd undergone a complete reversal in her opinion on guns. She had been a big fan of the NRA and unlimited rights to guns, but having someone shooting teachers and classmates put her off her plan to spend her 18th birthday at a local gun range:

That's great, kid, but remember, we say "gun safety" now. It polls better. She said that even in the middle of the chaos Wednesday, it was hard to get her sister, at another location, to believe it was real:

“I even texted my sisters, 'Shooting at my school. I am safe,'" the girl said. “They both responded with, 'OMG, LOL, you're funny.' Now that's a problem in society, and it's a bigger problem in America.”

David Hogg's younger sister, 14, was elsewhere in the building; he told the New York Times that two of her best friends were killed Wednesday. He also was very much aware that, paradoxically, even being in the middle of a school shooting only surprised him because it was happening to him:

“On a national scale, I’m not surprised at all,” he said of the shooting. “And that’s just sad. The fact that a student is not surprised that there was another mass shooting — but this time it was at his school — says so much about the current state that our country is in, and how much has to be done.”

Hogg called on national politicians to get their act together:

“We need to do something. We need to get out there and be politically active. Congress needs to get over their political bias with each other and work toward saving children’s lives.”

In an interview with CNN earlier on Thursday, Mr. Hogg expressed his frustration with politicians in simpler terms: “We’re children,” he said. “You guys are the adults.”

Oh, David. Have you even watched the "president's" favorite cable news channel? But you have a point. Maybe we adults could act like it now and again. We seem to remember previous generations of adults telling us we needed to fix the world they'd broken, and kids like David Hogg, Cameron Kasky, and the girls who took to Twitter to yell at Trump and Lahren, shouldn't have to shoulder cleaning up that mess themselves.

Nor should their classmate Carly Novell, who tweeted about the weird coincidence that 70 years ago, her grandfather, Charles Cohen, was the only survivor in his family during a 1949 killing spree that's often considered the first mass shooting in modern-day America (at least by people who call mass lynchings or massacres of Native Americans something else):

America's kids are pretty damned good if you ask us. We owe them better than the NRA-inspired nightmares they've been handed.