THE MYSTERIOUS ADVENTURES OF THE PERFESSER, THE RUSSIAN LADY SPY, AND THIS FUCKING TRUMP IDIOT 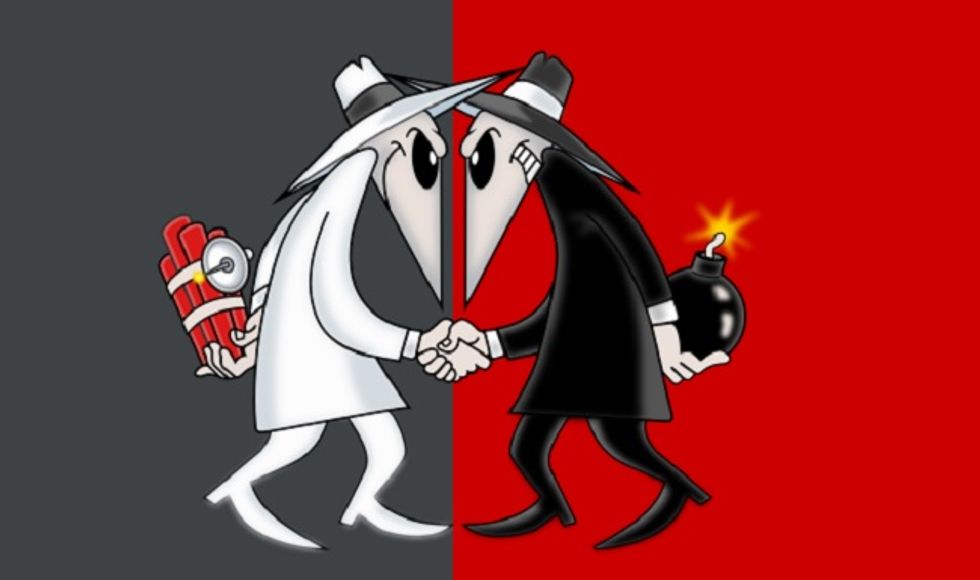 As we said when we told you about the Paul Manafort and Rick Gates indictments, Mueller Time is just beginning. So here's another thing! A low-level Trump campaign "policy" adviser named George Papadopoulos pleaded guilty to lying to the FBI on October 5, in news that Robert Mueller just now allowed to be unsealed today FOR SOME REASON. Can't imagine why! And it's only a one-count guilty plea. Legal experts are saying that's a signal that maybe this kid is officially a cooperating witness in the Mueller investigation, and maybe Mueller is sending a signal to all of Trump World that he means serious business right now. Legal expert "Wonkette.com" is saying there is no MAYBE about it, since it fucking says so in the very last line of the plea, all, quote, "he is soooo cooperating and giving us soooo much information, sooooo many numerous times." LEARN TO READ, LEGAL EXPERTS, LIKE YOUR WONKETTE.

George Papadopoulos might not be a Trump campaign idiot you think about every day. He was listed as a foreign policy adviser to Donald Trump in March 2016, as part of the team that included Dumbest (Until Now) Russian Spy Ever Carter Page. Papadopoulos seems to have spent most of his tenure at the campaign trying to bug Paul Manafort and others about setting up meetings between Donald Trump and high level Russians, up to and including Vladimir Putin. At the time, it seemed like he was a little dumb pipsqueak, and since emails showing what Papadopoulos was up to were actually turned over by the Trump administration, people figured he was a minor player in the #scandal.

But maybe there's more to this story! And maybe it is a VERY STUPID STORY, if Padadopoulos's statement of offense is any indication.

OH GOD IT'S HER FUCKING EMAILS AGAIN. Remember how the Russians approached Donald Trump Jr. claiming to have sexxxy dirt on Hillary? That meeting was in June of 2016. In May of 2016, a Russian military intelligence officer was picked up in surveillance bragging that Russia was about to fuck Hillary Clinton the fuck up. Also in 2016, Trump data gurus Cambridge Analytica approached Trump-Russia data gurus Wikileaks to see if they could help find Hillary Clinton's mythological "33,000 deleted emails." Meanwhile, Michael Flynn's alleged buddy Peter Smith, who is currently dead, was ALSO bragging about working with Russian hackers to find those emails.

We are sensing a theme here.

So PAPADOPOULOS had a PROFESSOR with "ties to" RUSSIA, and the PROFESSOR was going to give him all the dirty Hillary Clinton emails. And the kid lied to the FBI and said he wasn't part of the campaign at the time, when he totally was.

The second lie was that Papadopoulos tried to tell the FBI his professor friend was just some nobody, when in reality he believed his professor friend was a super-cool secret powerful "ties to" Russia person who was trusting him and only him to share THE SECRETS. Papadopoulos also lied to the FBI about another Russian contact, who was an actual bona fide lady Russian (!!!).

It all started on March 14, 2016, when Papadopoulos was on holiday in Italy, just like in every spy movie ever, and met the PROFESSOR, who didn't give two shits about him until he revealed he was joining the Trump campaign. A week later the PROFESSOR brought the LADY SEXY RUSSIAN PERSON with him to meet the kid. PROFESSOR said she was related to VLADIMIR PUTIN!

Over the course of the next month, there was much back and forth between the idiot kid and his Russians, and the kid dutifully reported back to "advisers" and "senior advisers" and "senior campaign officials" and such as on the Trump campaign about setting up meetings with high level Russians. Then in late April, the PROFESSOR told the kid about the sexxxy Hillary Clinton dirt they had to share:

THIS WAS SO 'SCITING! HILLARY DIRTS! And he was Skyping with the Russian Lady Human Spy all the time too, about doing a top secret foreign policy trip to Russia too! But her emails! Lady Russians! Maybe lose virginity in process?

Note also that when the Russians told him about these alleged "thousands of emails," we did not yet know Russian hackers had infiltrated the DNC or the Hillary Clinton campaign. But the Trump campaign mighta had a clue, seems like! (FYI, the hack of the John Podesta emails happened in March.)

After Papadopoulos lied to the FBI about all this in January of 2017, he suddenly deleted his Facebook and threw away his Obamaphone, because that's what innocent people do. He was arrested on July 27, 2017, and has met with the government "on numerous occasions to provide information and answer questions," which lends more credence to what we said above, about how it looks like he's an official cooperating witness, which Jesus of course he is.

It's going to be really weird when they try to claim they've never met Jared Kushner.