The Name Of The Mockingbird Is Rose: Remembering Harper Lee and Umberto Eco 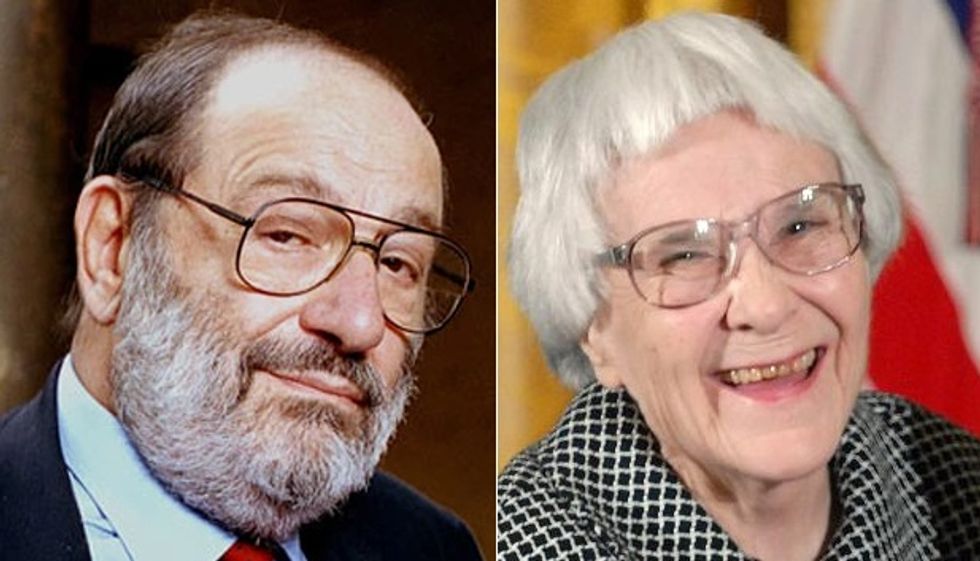 It's been a rough couple of days for your bookish types. Friday, we lost Harper Lee, the author of To Kill a Mockingbird, a novel many of us grew up with, and then later in the day we also learned of the death of Umberto Eco, who wrote one of the most fully immersive novels we've ever read, The Name of the Rose. Two extremely different writers, but both masters of creating worlds and characters who felt incredibly real.

Yr Dok Zoom was one of those weirdos who somehow didn't read To Kill a Mockingbird in high school -- some quirk of scheduling, maybe, but I didn't read it until I was in my twenties. But god, what a completely realized world Scout and Jem and weirdass little friend Dill (based on Lee's childhood pal Truman Capote) inhabited. These were kids who talked and sounded like kids. Also, I was lucky enough to read the book well before seeing the movie, so I could imagine my own Atticus Finch, not Gregory Peck -- not that he's not a fine Atticus, of course (Strangely, the one thing that I remember most from the movie is Scout stumbling around in her "ham" costume). And we can all agree on the important life lesson taught by To Kill A Mockingbird: don't let anyone talk you into busting up an old chifferobe. No, I haven't read the first draft/sequel Go Set A Watchman, but it's on the list.

Umberto Eco was a wholly different bird, an academic and linguist who loved a good conspiracy story. But again, a builder of worlds -- of all the novels I've ever read, The Name of the Rose remains (along with, maybe, Frank Herbert's Dune) the one that I most felt like I was living inside of while reading it. It's a book about books, a mystery with a medieval detective (Brother William of Baskerville, for godssake!), and it's got a beautiful digression with monks arguing about the theological implications of whether Jesus ever laughed. And without any spoiler warnings, I can assure you that the ending will leave you breathless. It's the only book I ever surreptitiously kept reading after a grad school lecture started, which left me a little weak on David Hume, but was well worth it. Eco's other novels -- especially The Prague Cemetery, a wholly fictional version of how The Protocols of the Elders of Zion came to be written -- were often very good, but The Name of the Rose was the only one that out and out consumed me. Again, the NYT obituary is a must-read, and NPR has a brief chat with Eco recorded last year:

So let's take a little time on a weekend to remember these writers we miss, and others who might come to mind. And then a little later, we'll get to the mere realities of the caucuses and the primaries.

Don't worry, you politics junkies: the caucus/primary open thread is on its way, as is a very special Saturday edition of Dear ShitFerBrains. And Sunday, we'll have a full wrap-up of the Nevada and South Carolina unpleasantness, our Snake Oil Bulletin, and at long last, we'll finish reviewing that awful novel by Tarp Man.