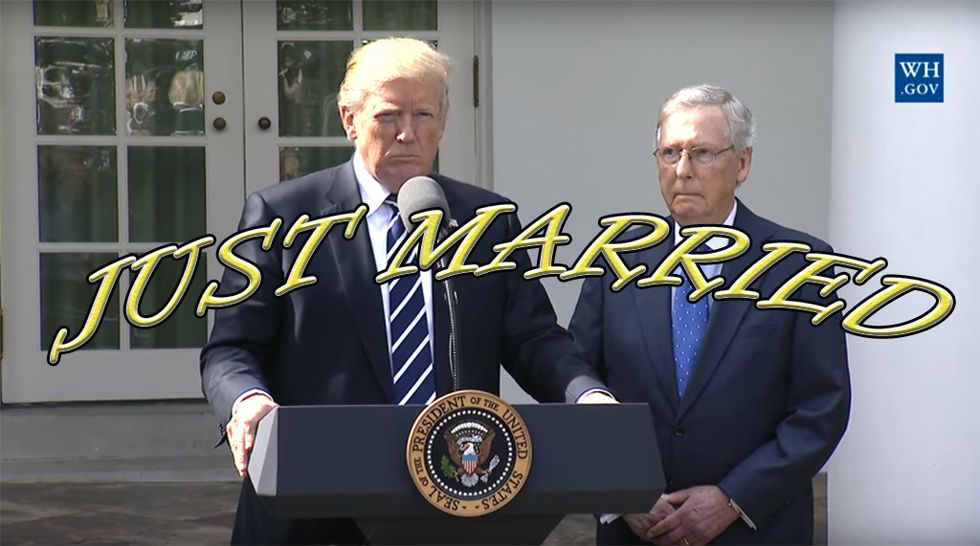 GOOD MORNING Wonketariat! Here are some of the things we may be talking about today!

John McCain gave a speech to some other olds Monday night and dropped bombs all over nationalists and Trumpkins with these hot zingers: “To fear the world we have organized and led for three-quarters of a century, to abandon the ideals we have advanced around the globe, to refuse the obligations of international leadership and our duty to remain ‘the last best hope of earth’ for the sake of some half-baked, spurious nationalism cooked up by people who would rather find scapegoats than solve problems is as unpatriotic as an attachment to any other tired dogma of the past that Americans consigned to the ash heap of history.” Oh, WINGNUTZ!

All the poor states are completely fucked now that Trump stripped their federal subsidies for health insurance, and they're trying to figure out what to do next.

Trump is going to declare the opioid crisis in America a national emergency next week. Meanwhile, he "You're Fired" the guy he was going to pick for drug czar, Rep. Tom Marino, after a WaPo/60 Minutes investigation found that he was already a literal drug czar.

The only thing Republicans can agree upon is Trump's effort to stack the courts with more Republicans. What better way to avoid a corruption scandal than to tip the scales of justice?

That Rose Garden speech Trump had with Mitch McConnell has confused everyone on the Hill - Is he sucking Steve Bannon's cock, or is he building log cabins with McConnell?

Trump and his minions don't understand why they keep getting thwarted in the Senate where old white people, their rules, and their bullshit reign supreme.

Not only is Trump's White House telling Trey Gowdy and the House Oversight Committee it isn't using private emails like a certain "Cillary Hinton", it's telling people to fuck off and stop asking all its fancy private plane trips.

Former Obama aides are coming out of the woodwork with stories about all the times B. Barry Bamz called the families of dead soldiers in reaction to Trump's bullshit lie that he's the only one who's ever done that.

Callista Gingrich, wife of Newt, is your new ambassador to the Vatican after a 70-23 Senate vote yesterday. Personally, we're wondering what shenanigans Newt will get his dick stuck in while fucking off in Not America.

Democrats are demanding FCC Chairman Ajit Pai actually do something about Trump's threats to NBC, but most experts find it highly unlikely that Pai will ever perform any action that could be considered "fair" or "good."

There's a troubling trend building where crazy shit happens somewhere, but the stock market climbs anyway, and that has some math nerds worried.

In case you missed it, Trump thinks the military "shouldn't have to be" distributing food in Puerto Rico because the federal government has already provided "massive amounts of food" and water.

Meanwhile, the governor of Puerto Rico is just hoping to restore electricity by December, and the EPA is is investigating reports of people drinking and bathing in contaminated water from Superfund sites.

Officials in California are warning people against returning to the smoldering ruins of their homes in an effort to avoid disease and poisonings.

A Republican Virginia state lieutenant governor hopes voters are too stupid to connect the dots to her shadowy evil empire that funds conservative movements around the country.

A Mass-hole businessman is watching his empire crater after he posed for a photo with Trump as he signed the EO gutting health insurance subsidies, and he just wants some sympathy for his ignorance.

Rich Florida Man and GOP Governor Rick Scott has issued state of emergency for Alachua County ahead of neo-Nazi Richard Spencer's talk/Nazi rally at the University of Florida.

Bettina Rodriguez Aguilera is a 59-year-old Republican Congressional candidate who says she was abducted by aliens when she was seven, and has since received several telepathic messages from them. Yep.

North Korea doesn't give two soggy shits about what anyone else wants, with an official telling CNN the DPRK won't come to the table until its missiles reach the US, and that a nuclear war may break out at any moment.

The US reportedly dropped some bombs on ISIS fighters in Yemen, which is still acting as a D-list stunt-double for Iran.

In the wake of the Kurdish independence declaration, Iraqi forces captured the city of Kirkuk, while Trump followed a century of historical precedent by casually throwing the Kurds under the bus.

The deadline for Brexit talks have been pushed back to December after EU leaders told Theresa May to bugger off (again).

Russia's troll farm has been pressing all the right buttons in the US for years, like tax policy, gun rights, and HER EMAILS, but one day in 2015 shit got really weird ...

Apple responded to Senator Al Franken's concerns about its "Face ID" unlocking feature with some nice, buttery jargon that boils down to "We're not keeping anything." While this has been a standard feature on Windows and Android devices for years, Apple doesn't really have the best track record for security.

In an effort to fend off federal oversight, Facebook is actively seeking employees with security clearances. This is just further proof that Zuckerberg is a douchebag.

Even though Obama's FCC explicitly told them to stop, Verizon and AT&T are still selling customer data by tricking people into entering basic information into mobile sites that spit out personal details about users.

Super creeper Seb Gorka went on Fox and Friends Tuesday morning to remind everyone Trump is trying to make AMERICA great again, not the GOP. Silly olds, only one of these things can actually be bought by Not America.

Dana Loesch, the NRA's loudest gun fetishist, is scared for her life after ALLEGEDLY getting death threats from anti-gun people, ALLEGEDLY. Note: We never advocate violence against anyone (even if they regularly advocate for bad public policy, like pushing for violent and/or disturbed individuals to carry firearms).

Here's a look back at all the people Trump thinks are villains, or bad guys, or whatever. It's a pretty long list.

And here's your late night wrap-up! The Daily Show is in Chicago and realized it's just like Syria, but with pizza (and Cubs!); and Jordan Klepper knows Trump's enemies are his friends.